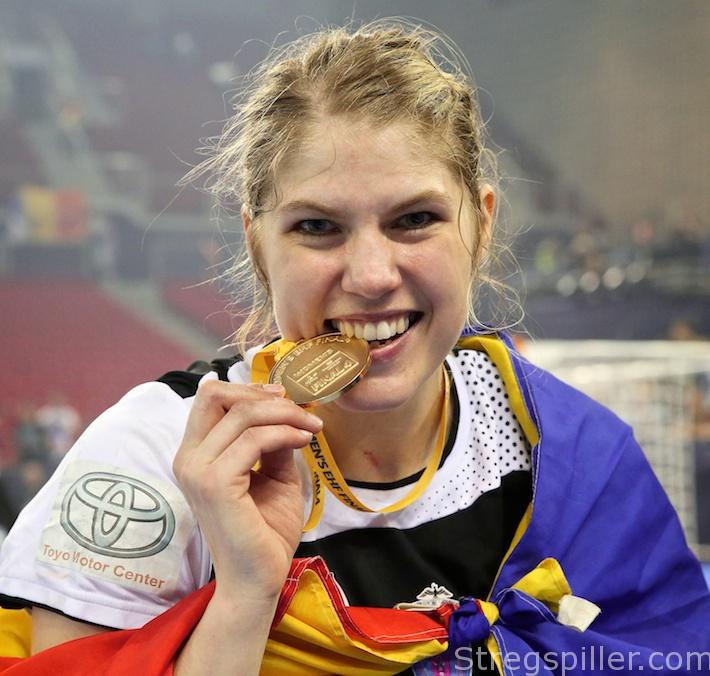 “My mental coach helps me focus on what is important”

INTERVIEW – Danish international, Line Jørgensen, hired a personal mental coach in her efforts to come back from her long injury break.

In her conversation with stregspiller.com, she talks about the results of this arrangement at a time, where psychological strength is called for more than ever considering the turmoil at CSM Bucuresti.

Increasingly top athletes hire their own personal mental coach – Line Jørgensen is one of them.

The 28-year-old right back of the Danish national team has employed a mental trainer helping her in her effort to get back to the top of her handball game after her long injury break, last year.

“I felt it was difficult to get back.

“There were many things I was able to do before my (injury ed.) break, and I very much wanted to do them again, but I could not really succeed on the court.

“Therefore, I contacted mental coach, Carsten Oldengaard, who I have been working with very closely ever since.

“He has been in Romania, where he followed me during practice and matches, and in addition I speak with him via Skype or on the phone at least once a week.

“I simply want to become even better, and I believe he can help me with that,” says Line Jørgensen.

“I feel that he has given me some tools to simplify everything I do and I have moved on from “wanting to do a lot of things” to focusing on what I want most and what is most important for me right now and to get more structure with regards to the things I do.”

Mental strength is undoubtedly called for in Line Jørgensen´s handball life on another level as well.

Just before she returned home for two European championship qualifiers against the Czech Republic later this week, another Dane, Helle Thomsen, was let go as head coach of CSM Bucuresti.

She wasn’t the first coach who got sacked in Bucuresti midway through the season and to Line Jørgensen, national team week came as a welcome break from all the turbulence in Bucuresti.

“Even though the matches against The Czech Republic represent serious tasks against an opponent who reached the quarter-final at the World Championship – as did we – it’s really nice to come home and be with a completely different group of players and focus on something else,” explains Line Jørgensen who can look forward to yet two more challenges, once she returns to Romania.

Metz Handball will be waiting in the quarter-finals of the Champions League, and after only finishing third in their main round group, CSM will have to play the second leg at “Les Arenes”, in Metz.

“Of course, there has been plenty for turmoil at CSM as of late.

“We have lost a match in the league (against second-place Craiova, ed.) and we have lost some games in the Champions League, and now we have to look forward to a couple of very difficult matches.  It will be particularly hard to finish the quarter-final in Metz.

“Metz have been playing together for many years and know each other extremely well.

“Obviously, we’ll face two very challenging games, which I hope we’ll win on aggregate, of course.  I think we have the team to win.

“There is no doubt that we will need a victory – preferably a clear one – in the first match in Bucharest, and that I consider possible.

“I am sure that all of us are very much looking forward to the two quarter-final matches, as these are the games we train for all season,” she says.

Hoping for a third FINAL4

If CSM can overcome Metz, Line Jørgensen will find herself in the third FINAL4 of her career.  In 2014, when playing for Danish FC Midtjylland, she was part of the inaugural event in Budapest.

It was the only time so far, a Danish team made it to the Champions League season ending event.  At the time, Midtjylland finished fourth and last.  Matters changed drastically in Jørgensen´s second FINAL4, in 2016.  Representing CSM Bucuresti, she could lift the trophy, when CSM won the Champions League in their maiden season.

Last year, Line Jørgensen was also present in Budapest, but unable to play because her long-lasting hand injury.

“It would be awesome to compete in the FINAL4 for a third time.

“For a club team, it simply is the greatest honor you can achieve.

“Entering the arena in Budapest and feeling the thrill is very special. I can feel it right now, just thinking about it – it simply is fantastic to be there.

“Playing in a Romanian team that’s always supported by their impressive fans – supporters who travel all the way to Budapest to back us -makes the whole experience even more outstanding.

“You really feel that you have something to fight for, and winning the Champions League in 2016 was the greatest experience I enjoyed as a handball player,” she says.

If Line Jørgensen is going to compete in her third FINAL4, the next big question is if it will be her last FINAL4 for some time to come?

After signing the three stars from Vardar (i.e. Andrea Lekic, Jovanka Radicevic and Dragana Cvijic) as well as the dismisal of coachThomsen, CSM’s team will look completely different after the summer.

Line Jørgensen is one of several CSM players, who are tied to rumors, linking her name to other clubs in Europe.  Last Saturday, she was seen in talks with the management team of Danish Cup winners, Team Esbjerg, on the outset of Esbjerg´s league match against her former club, FC Midtjylland.

The talks concluded with a hearty handshake with Bjarne Pedersen, the president of Team Esbjerg.  Line Jørgensen herself has not much to say about joining Esbjerg or any other club at this point in time.

“At the moment, I have no comments about my future.

“I hope to have everything settled before the start of the next season, though,” she says with a laugh.

“Right now, I get a lot of questions about my future, but no matter how you’ll ask, I have no comments,” says Line Jørgensen.

Let’s leave it there, but it would be a big surprise if she won’t be playing in Esbjerg, next season.