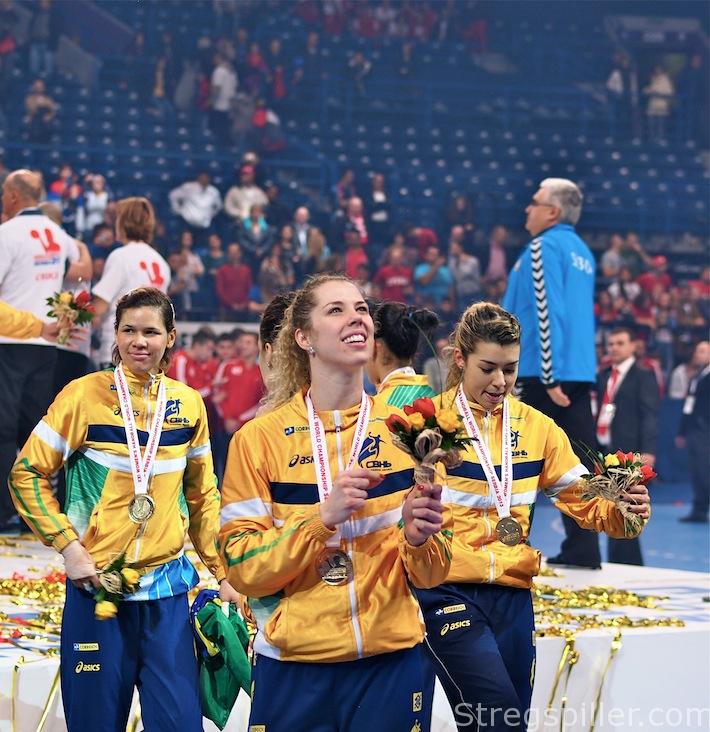 A Nail-Biter And A Blow-Out

After an exhilarating and exhausting championship season it’s time for a resume. Two days before Christmas Brazil’s women national handball team took their first ever World Championship in thrilling fashion against the home team and in front of a world-record setting crowd of 20,000 in Belgrade’s Kombank Arena.  A bit more then a month later “Les Experts” from France resurrected themselves as the dominant force on the men’s side executing a handball clinic in the final game of EURO 2014 leaving host Denmark in the position of second winner.

Clearly the team from Brazil left the most impressive mark on handball’s global landscape.  The work of coach Morten Soubak culminated in what many called the best handball final ever played against a Serbian team that fought courageously all the way to the very last minute.  Most of the time Serbia was trailing in a hectic and fast paced game that was meant to have a Cinderella ending for veteran players like Svetlana Ognjenovic, Jelena Eric and Katarina Tomasevic especially.  Indeed five minutes before time the stars seemed to align favorably for the team of Sasa Boskovic when Jelena Nisavic equalized the score at 19:19.  And when Eduarda Amorim received her second two minutes suspension the match seemed to slip away from Nascimento & Co.  A successful penalty shot by Andrea Lekic only seconds later drove the audience into a deafening frenzy and Kombank Arena had reached its boiling point.  Once again a frenetic Serbian audience seemed to provide the extra wind to the home team in the dying moments of a historic match and with one player less on court Brazil appeared to be ready to hand over victory.  What followed can easily be described as core DNA of team Brazil A.D. 2013.  Instead of caving in and rolling over Brazil’s players kept their composure and scored two goals with their most dangerous back-court player off the field.  A bit more then a year earlier at the 2012 Olympics in London virtually the same Brazilian team had lost their nerves in a quarter-final match against Norway giving up a six goal lead while collapsing toward the end of the game.   Not so this time – Deborah Nunes and Ana Rodriguez scored the final two and decisive goals while under severe pressure – mildly put.  This Brazilian squad was different.  It truly believed in its ability to play and win the game given most adverse circumstances in a hostile environment.

Following the World Cup win there is a real window of opportunity that players like Fabiana Diniz and Daniela Piedade, to name a few, will inspire as many girls at home to pick up the game of handball and become a part of the foundation for the next generation of champions.  It will not happen by itself and hopefully for the sake of handball Brazil’s “Confederacao de Handebol” will recognize this life-time opportunity for what it is – an opportunity that presents itself not very often.  Coach Soubak already left his imprint on team Brazil in more than one way.  Including his motivational gimmick of handing out silver medals made of aluminum foil to each player before the final match.  Over the years he has formed and grown a group of outstanding individual athletes into a serious medal contending team – physically and mentally.  A fact, by the way, that did not go unnoticed in his home country where the smoldering debate about Jan Pytlick’s job status may only be the beginning of a process that could end with Soubak taking the helm of team Denmark.  After all handball is fast paced contact sport – on and off the field.

Only five weeks later it was the men’s turn to determine the 2014 European Champion in the homeland of handball – Denmark.  The event was also designed to provide the backdrop for a farewell of one of the sports’ most accomplished professionals – Danish coaching legend Ulrik Wilbek.  Unfortunately and like the tournament in Serbia there was no happy ending for the hosting team.  In a lopsided final match Denmark saw itself quickly down by nine goals against France.  Memories of the disastrous game a year earlier at World Cup XXIII resurfaced when Denmark lost by an unprecedented margin of sixteen goals against Spain.  But unlike twelve months ago this time around Wilbek’s men did not collapse entirely and when the final whistle blew team Denmark had achieved 32 goals with an impressive scoring efficiency of 55% – a result that would have been sufficient to win most handball games.  In fact a score of 32 points in regulation time would have won any of the previous ten European Championship’s since 1994 with the exception of one.  However, team France had offset the Danish accomplishment with 41 goals of their own and a staggering scoring efficiency of 69%!  A phenomenal achievement causing French media to quickly turn “Les Experts” into the “Les Indestructibles”.  Only DHB Vice-President, Bob Hanning, later re-called the old (handball) adage that a ”strong offense wins games while a superior defense wins championships.”   A comment that made you wonder what game he saw?  Never before in the history of European Championships were more goals scored (73 !) in a final match then in the last game of EURO’14.  14,000 spectators at Herning’s “Boxen” saw a scoring feast – well maybe only 13,999.

While Karabatic & Co. had reserved their very best performance for the last fight of the tournament Niklas Landin experienced a day between the goal posts to forget about.  Statisticians may have to dig deep to find a similar, dismal rate of saves (15%) for the Danish team captain.  Of course, it would be too easy to blame the embarrassing loss in its entirety on poor goalkeeping.  Denmark’s defensive effort – if one could call it that – was almost not in existence making the task for Landin and Janick Green next to impossible.  Mikkel Hansen’s strong offensive performance (9 goals) was neutralized by his immediate opponent Valentin Porte (9 goals) who seemed to be scoring at will for the most part.  By the time other Danish players had found their rhythm and a way to get the ball past “Titi” Omeyer the match was effectively decided.  The Danish team certainly did its part to lose Wilbek’s final championship match but some of his actions before and during the game raised more then an eyebrow.  A fair number of Danish supporters questioned his decision to include Mads Mensah in the starting line-up.  Wouldn’t the experienced Thomas Mogensen have been more appropriate to run the opening plays in an emotionally charged atmosphere?  And why did he decide to not bring back the successful and 100% healthy left-winger Casper Mortensen?  Instead he opted for Anders Eggert as the only player occupying the far left side.  Denmark’s line-up for the better part of the second half of the game spoke for itself and dare we say for Casper Mortensen.  It all may not have made a difference on a day when any team in the world would have been hard pressed to challenge a French collective that played its most complete game of handball – maybe ever.

“Les Experts” claimed their third European Championship and many observers were left wondering which other nation(s) would be able to beat this exceptional team going forward.  After only a brief transition phase (2013) coach Claude Onesta was able to mold another group of young, talented players around the team core consisting of Nikola and Luka Karabatic, “Air-France” aka Daniel Narcisse, left-wing superstar Luc Abalo and pivot Cedric Sorhaindo.  The shadow of defensive legend Didier Dinart became a bit shorter and the void left by the Gille brothers appeared somewhat smaller over the course of a fortnight.  Onesta will soon have to deal with further changes and retirements (Omeyer, Fernandez, Gigou) but the likes of Valentin Porte and Cyril Dumoulin appear to be more then ready to shoulder the responsibilities.  While France may ultimately prove that it won’t be indestructible it will ascertain that the task at hand won’t be easy for any potential competitor attempting to challenge the new and old status quo in Handball Europe.  Denmark in turn will have to do more then just soul searching following the second consecutive loss with a historic dimension in the closing match of a major tournament.

In the handball finales of 2013/2014 Brazil and France demonstrated a mental preparedness that impressed spectators and experts alike.  It is the one dimension of the game where superior coaching skills can and will make a big difference.  Most if not all top teams enjoy state-of-the art strength training and physical conditioning.  Improvements or new techniques in these categories do not remain unpublished for long either and will be shared eventually.  But getting into players heads, touching their souls and stroking their egos remain secret coaching abilities that only few possess and truly master.  Morten Soubak and Claude Onesta have both proven that they hold the magic key to unlock the full potential of their respective teams when it matters most.  Finally, Soubak has joined the club of the “chosen few” in 2013 while the status of Claude Onesta is in the process of being upgraded to “Platinum” – “a metal that exhibits a remarkable resistance to corrosion even at high temperatures”.