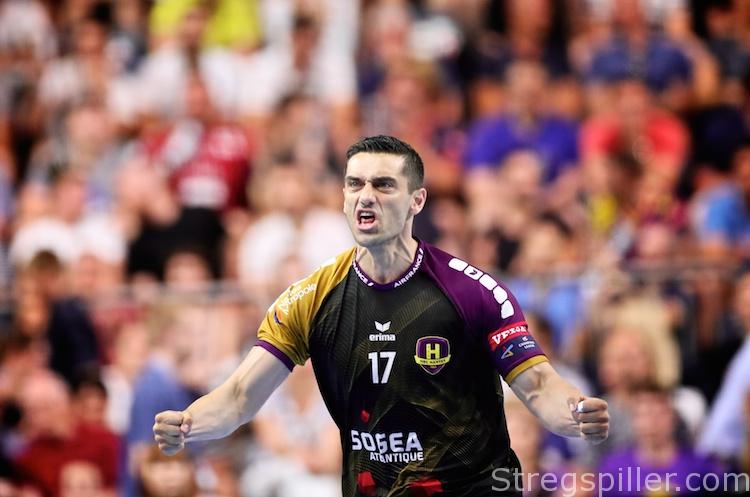 stregspiller.com – MATCH OF THE WEEK REVIEW – Rhein-Neckar Löwen were leading by five goals with eight minutes left to play, but in the end had to settle for a two-goal win, at home, in the first leg of the Round of Last 16 against HBC Nantes.

The result leaves Nantes with a good chance to reach the quarter-final, while Rhein-Neckar Löwen are in real danger of exiting the VELUX EHF Champions League prematurely for a fifth year in a row.

Nantes’s patient attack kept Rhein-Neckar Löwen on a short leash for the better part of the 60 minutes.  Towards the end of the match, the former German champions were close to securing a better result, when they were leading by five goals (31:26).

Yet, Nantes cut the deficit and a last-second goal by Eduardo Gurbindo from center court could make a real difference in the 2nd leg match, in France.

Nantes’s head coach, Thierry Anti, tried to compensate for the absence of injured playmaker Nicolas Claire using Eduardo Gurbindo as left-handed playmaker together with Kiril Larzarov on the right back position.

Romain Lagarde, was another player who caused considerable problems to his future club, scoring three goals in a row, as Nantes went ahead 7:4.  Unexpectedly, the 22 year-old player had reported fit to play.

On Rhein-Neckar’s side, Andy Schmid and Jannick Kohlbacher produced yet another two-man show.  Schmid’s brilliant shooting  and timely passes, where the key reasons why Kohlbacher scored six of his game high eleven goals in the first 30 minutes, not to mention the three penalties he caused.

Rhein-Neckar´s two Swedish field players – line player Jesper Nielsen and left wing Jerry Tollbring remained sidelined due to injury. But, Steffen Fäth was ready for action and his presence produced immediate results, when he was sent on after 19 minutes.

It was Fäth who handed the home team their first lead, when he made it 16:15 with two and half minutes left on the game clock, and shortly thereafter, it was him again securing a two-goal advantage at halftime.

Mikael Appelgren – he had replaced Andrea Palicka in Rhein-Neckar’s goal midway through the first half – was another factor why the home team had turned the table before the break.

And, he continued his fine performance in the second half, except Olivier Nyokas came on with great success from the start of the last 30 minutes.

However, not even Nyokas could prevent Rhein-Neckar from getting the upper hand as the hosts had more success with their 5-1 defense and Kohlbacher continued to benefit from Schmid´s terrific passing.

As the game began to wind down, Rhein-Neckar appeared to be ready putting on the finishing touches, but it took Nantes less than four minutes to cut the score to 31:29.

Rhein-Neckar answered and went up by three goals one more time, as Schmid made it 34:31 but Eduardo Gurbindo, who sent the ball into an empty net from center court, had the last word.

Considering the way the game went, a result that leave Nantes with all options in the 2nd leg, in 10 days time.

Both teams will have obligations in their respective national leagues before the return match in Palais des Sports Beaulieu, in Nantes, on Saturday evening, March 30th.

On paper, Nantes appear to have the edge now, not the least as they will enjoy home court advantage.  But, Rhein-Neckar Löwen are an experienced team and won’t show up in Nantes just to be pushed over.

For sure, handball fans will be in for another Champions League treat in less than two weeks time.