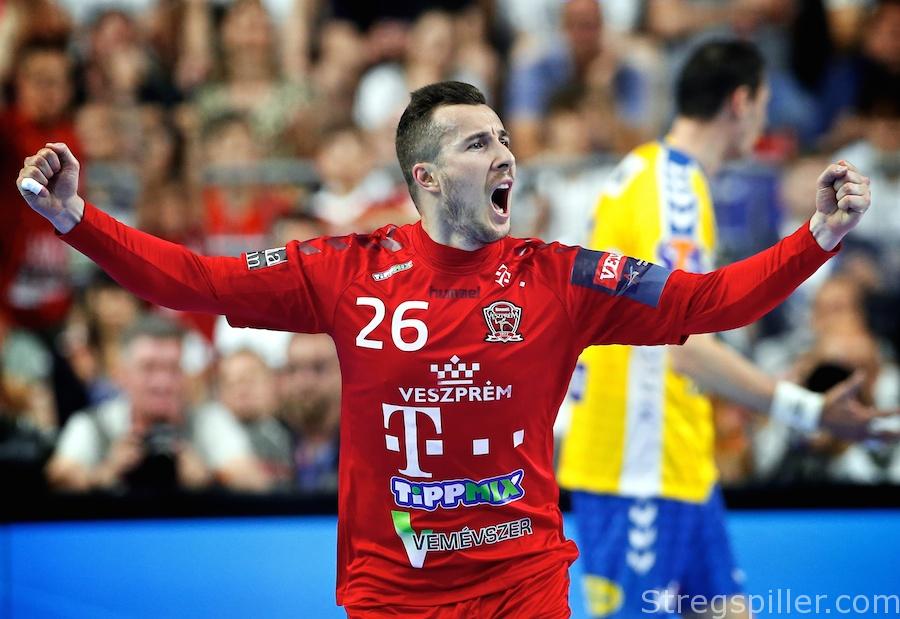 MATCH REVIEW – An out-of-this-world performance from Petar Nenadic played a decisive part, as Veszprém booked their ticket for the VELUX EHF Champions League Final, overcoming the Kielce team who had been giving them bad dreams for three years.

A well-prepared and brave Kielce team managed to hang in almost all the way, but they had to let go at the end.

Both teams made a comeback to the FINAL4 after being absent last year. Veszprém’s route went via second place in their group and clear wins against Sporting Lisbon in Last 16 and Flensburg in the quarter-final.

Kielce came from fourth in the same group as Veszprém, and after eliminating Motor Zaporozhye in the Last 16, they pulled the sensation by sending out Paris Saint-Germain in the quarter-finals after a 10-goal win at home and a nine-goal defeat away.

Veszprém won both previous games between the two teams this season – 29:27 at home and 36:35 away.

However, neither team had probably forgotten the Champions League final in 2016, in which Veszprém were leading Kielce by nine goals with 14 minutes left, only to lose 39:38 after penalties.

Veszprém get another shot at winning that Champions League trophy they have never won after they managed to win a tight, intense and well-played semi-final against a Kielce team who also had much honour of the game.

With no fewer than 12 goals, Serbian left back Petar Nenadic played a crucial part in the win for a Veszprém team, who were shocked by an ankle injury for goalkeeper Arpad Sterbik at the middle of the first half.
Through the win, Veszprém should have chased away the ghosts from the Champions League final three years ago, which they lost to Kielce after leading by nine goals with 14 minutes left.

Seldom has a game changed that much within just 30 minutes.

Both teams having their spell with the upper hand during the first half, a standoff at halftime was justified.

Veszprém got the far better start, leading 4:0, as it took Kielce five minutes to score their first goal. Alex Dujshebaev made it, reducing the gap to 4:1.

Veszprém continued to dominate the affair for the next minutes, though, leading by four goals again at 5:1 and 7:3.
The Hungarian 6-0 defence was simply much stronger than Kielce´s 5-1 formation, which was far less successful than in the quarter-finals against PSG.

Behind this strong Veszprém defence, Arpad Sterbik had fine working conditions, and after a few easy saves, the veteran was ready for the big ones, which he also managed in style.

Then, as Kielce were beginning to come into the game, Sterbik got injured. On one of his rare fast breaks, Kielce defender Marko Mamic collided with Sterbik’s foot while reducing to 8:7.

Sterbik had to be assisted from the court and replaced by Roland Mikler who did not have the same success, but this was not the only reason why Kielce took over the initiative.

Their 5-1 defence – at times changing into a kind of 3-2-1 – improved, and at the same time, Vladimir Cupara stepped up in goal.

In the 22nd minute, right wing Arkadiusz Moryto equalised to 8:8, and less than a minute later, Moryto’s teammate on the opposite wing, Angel Fernandez gave Kielce their first lead in the match at 9:8.

Kielce also got two up at 10:8 after scoring five straight goals, but still Veszprém came back and the scores were level at 13:13 by half-time.

Petar Nendadic had not got much court time in the first half, but the Serbian left back certainly took his chance when David Davis threw him on from the start of the second.

Nenadic, who is playing the first FINAL4 of his life this weekend, controlled the attack, his 12 goals meaning a lot, as Veszprém took the lead back from the start of the last 30 minutes.

Blaz Blagotinsek has often been an expensive man to the Veszprém defence, where he has been taking way too many two minutes suspensions this season.

This time, he got a straight red card 10 minutes into the second half. Hits to the face are not allowed, Mr. Blagotinsek.

The loss of Blagotinsek did not seem to handicap Veszprém much, though, and in the following minutes, they managed to go from being one goal up to taking a four-goal lead at 22:18 by scoring three goals in a row in an empty net.

After several minutes with the score changing between a three and a four-goal lead for Veszprém, Kielce made one last push, but they did not manage to get any closer than one goal, and as Mate Lekai, who avenged an unsuccessful first half, made it 32:28 with two minutes left, it was game over.

The two Macedonians Slave Nikolov and Gjorgji Nachevski did a fine job in a hectic match and a tense atmosphere.

They did not fall for the attempts from several players to trick them into making false decisions and they had the courage to take video checks in the situations in which they were in doubt.

“We actually had many chances to turn this game around, and we were actually leading in the first half after a poor start. However, it is difficult to win a handball match without goalkeepers.

“In the Veszprém team, we saw how deicing goalkeeper performances can be. Arpad Sterbik as well as Roland Mikler did a great job and enabled Veszprém to run a lot of fast breaks and we could not withstand that.”

“It was a great game from us, and I actually think we were in control more or less all the way.

“Of course, Nenadic was fantastic today, and he played a big part in our win.

“The thought that I can end my career tomorrow by playing a Champions League final is just so amazing that I can hardly believe it. Only one thing will be even better than that, and that will be winning the final.”

Veszprém can prepare for yet another Champions League final and another attempt to finally take the trophy.

It is a big question, however, in what condition they will be able to attend that final.

Arpad Sterbik did not look like someone who will be fit from his ankle injury that soon, which may mean a lonely Sunday in goal for Roland Mikler.

Furthermore, Laszlo Nagy was receiving heavy treatment on his left shoulder for great parts of the second half.

For Kielce, it will be that tough job of motivating themselves for the bronze medal match.