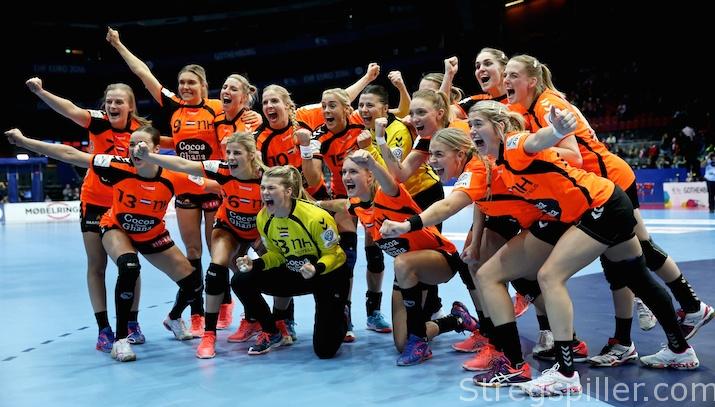 For the second time within one year, the Netherlands have reached a major championship final.

13 minutes were enough for the Netherlands to decide the first semi-final against Denmark, which the Dutch ended up winning 26:22.

It had been 24 years since the Netherlands and Denmark last met in a European championship final in Gothenburg.  Back then it was the European football championship and Denmark succeeded after penalties, advancing to win the tournament later.

The handball game in Gothenburg 2016 was also a battle between two Danish coaches, coming from two distinct environments.

Klavs Bruun Jørgensen hails from Copenhagen, where things usually move fast and life sometimes is quite hectic, while Helle Thomsen comes from provincial, almost rural, Frederikshavn, where everything is happening at a slightly lower pace.

Literally, it only took the Netherlands 13 minutes to decide the match.

During these first 13 minutes in the second half (the result increased from 13:13 to a 19:13, the Dutch denied the Danes any score. Regrettably – from a Danish perspective – the Stine Jorgensen & Co never recovered the setback.

The slogan of the tournament is “Pure Heart, All Hands.”  From a Danish point of view, however, it looked more like “pure nerves, no hands” at the start of the game.

Unforced errors, missed shots and wrong decisions marked Denmark’s performance at the beginning of their first main round match, against Norway, when they were trailing 6:0.

This time, it did not take the Danes that long to get into the game, as the Netherlands had only scored twice, when Maria Fisker recorded Denmark´s first goal after nearly six minutes.

Despite getting up by three goals a couple of times, the Netherlands also had their problems when in attack, though, especially, when Line Haugsted came in to stabilized Denmark’s defense.

The Netherlands were only dangerous through their “fast mid”, and because of Estavana Polman who was “hiding” on the left wing, from where she proved to be quite efficient.

Denmark came back (9:9), at which point coach Helle Thomsen (Netherlands) introduced a seven-against-six attack, a tactical measure that has not been seen that often at this championship.

The move translated into instant success, but despite another couple of Dutch two goal leads, Stine Jørgensen made use of a penalty shot right at the break, to level the score.

The Netherlands put the finishing touches on the match, only minutes after the start to the second half.  Had it taken the Danes six minutes to score their first goal in the first half, it took them 13 minutes in the second.

When Stine Jørgensen scored after the break, converting a penalty shot, the Netherlands were already leadiing 19:13.

The pace had disappeared from Denmark’s attack, which became too fragmented too quickly.  A number of players were pursuing their own shot opportunities, and this made the job pretty easy for a very stable Dutch defense, in front of a brilliant Tess Wester.

After 12 minutes, Kristina “Mulle” Kristiansen was finally sent on the pitch for the first time in the competition.

With her as playmaker in charge, Denmark’s attack started flowing a bit better, while she was also dangerous herself with her trademark under-arm shots.

Still, she was not able to change the rhythm of the game, nor its direction.  The Netherlands got up by seven goals, before the Danes were allowed to make some cosmetic changes to the result.

Nycke Groot – she made an impressive contribution in an excellent Dutch team. Aside from being dangerous herself (6 goals), she was organizing the Dutch attack and feeding her teammates with some exceptional passes.

“We kept the speed high throughout the entire match. We will not celebrate, not even a little, as we remain focused. With some physio and preparation we will spend the time until the final.”

“I’m sad that we couldn’t achieve a better result, but I’m proud of the girls.  Nobody expected us to be in the semi-final – so I’m really proud of my team.”

Finally, we got some atmosphere in Scandinavium, for some obvious reasons, it were the Dutch fans. Although outnumbered by the Danish spectators, it was the contingent from the Netherlands who made them heard in the last minutes of the match.

The Netherlands are ready for their second championship final within a year, and the question is, if they will do better against Norway this time around?  Twelve months ago, at the World Championship in Denmark, the game was practically over after the first half, when Norway were leading 20:9.

Once the disappointment is digested, Denmark will come to realize, that reaching the semi-final was a big step forward, after all. Especially, when compared to their achievements in the previous couple of years.