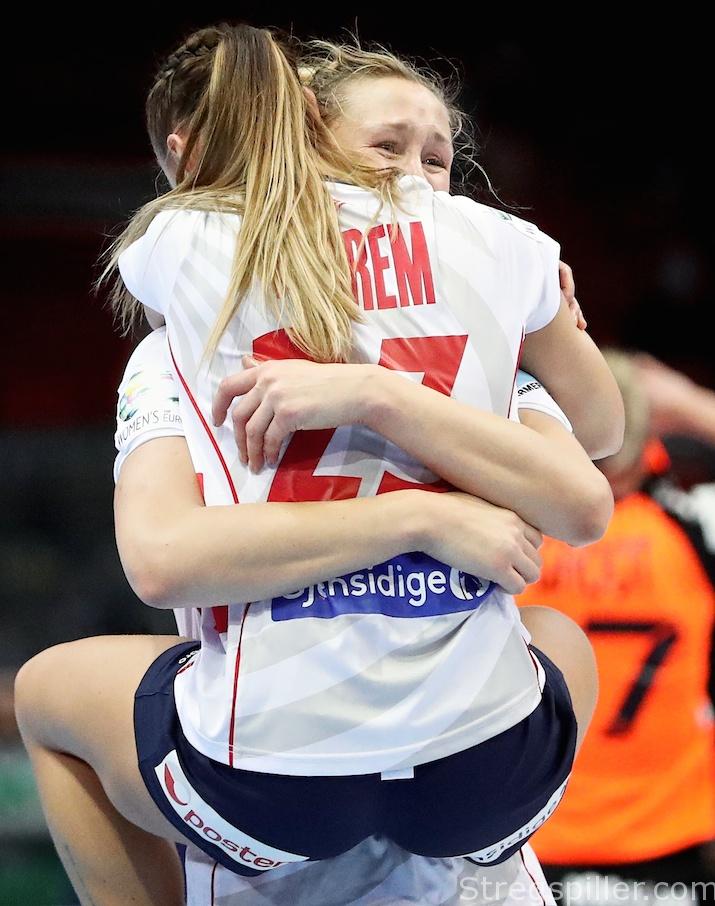 INTERVIEW – Marit Malm Frafjord has ended her handball career – or hasn’t she?

In this exclusive interview with stregspiller.com, she reveals that she might be tempted to put on her handball shoes once again, if the right offer comes along and will fit in with her daily life.

It came as surprise to most in the world of handball, when Marit Malm Frafjord announced that she was ending her career.

The news broke just after finishing third at the 2017/18 EHF FINAL4 together with CSM Bucuresti, a club she joined from Larvik only one year ago.

At the age of 32 it appears to be early to stop playing handball, but for Frafjord the time was right.

“You are correct – I am only 32 years old, but you also have to bear in mind that I have played handball at the top level for many years and I reached a point where I felt that I needed a change in my life – get a job outside handball and live together with my boyfriend, who I have not been staying together with, yet.

“Already when I joined CSM last year, I began considering my future and I was in doubt if my stay should last one or two years. I don’t think it was before May of this year when I decided that it was only going to be one year,” states the experienced line player and defense specialist who quit the Norwegian national team in 2017 to focus on her club career in Romania.

But is her decision final indeed? She indicates that it may not be permanent.

“For now, there is no doubt that it’s over. I really enjoy spending my summer holiday without having to think of keeping fit for the upcoming season and to be completely free and not having to worry about training programs.

“I may be going to miss it once the season starts again, but I also think it will be great to just watch the game.

“But, you should never say never again.

“If, some day, the right offer turns up and if I can fit it in with my daily life, I will not rule out the chance of a comeback completely. But for now, I simply enjoy to relax,” she tells stregspiller.com.

Nothing beats the FINAL4

For Marit Malm Frafjord, the biggest and most memorable moments in her career were not the many titles that she won.

“The greatest (experience ed.) has been playing the FINAL4, something I have done twice – once with Larvik and once with CSM Bucuresti.

“Neither time was I on the winning side, but every time it was a fantastic experience to play the FINAL4 in Budapest with all the hype and the fans while playing against some of the best players in the world.

“Of course, I also have great memories from my time with the national team – like the World Championship in Brazil in 2011 and winning the London Olympics in 2012, for instance.

“But, I will also remember my handball career for the many fantastic people I have met and all the good friends I made – in the national team, in Viborg, in Larvik and in Bucharest,” she says.

“Still, there is something special about the FINAL4 and the main reason why I signed with CSM was their ambition to win the Champions League.”

As we all know, the Romanians did not reach their objective but finished third for a second year in a row after the triumph in their maiden journey, in 2016.

En route to the 2018 FINAL4 in Budapest, Marit Malm Frafjord and her teammates experienced one of those turbulent seasons that have become CSM’s trademark of sorts, but it was something entirely new to Frafjord.

In the spring of this year, Helle Thomsen was sacked as head coach and Swedish Per Johansson was brought in as “the man to get-it-done” for a second year in succession.

“I think, that when you accept the job as head coach in a club like CSM, you must be prepared that your stay can end suddenly and I am convinced Helle was aware of it as well.

“Despite the turbulences, I look back at my year in Bucuresti as a great experience. It was fantastic to play and train with some of the best players in the world, every day. This aside, Bucharest is a rather cool city to live in.

“Of course, the management of the club is extremely ambitious, but they have every right to expect it after collecting some of the biggest stars in the world of handball.

“Still, the disappointment of not winning the Champions League was limited.

“Of course, everyone was disappointed, but everyone also realized that winning the bronze medal at such a strong FINAL4 as the one in 2018, wasn’t so bad after all.

“It was a FINAL4, where each one of the four teams could have won and only small things made the difference in the end,” she finds.

Norway will stay on top

As mentioned already, Norway’s national team has played a significant role in the life of Marit Malm Frafjord before she quit in 2017.

She firmly believes that Norway can maintain their position at the top of women´s handball in the foreseeable future.

“I see no reason why Norway should not stay in the international top.

“Of course, we cannot expect to win every time, like we saw in the most recent World Championship, when France succeeded. And for the interest in handball it is good that the same team does not win every time. Still, I think you will see Norway playing for titles in the future as well.

“The main reason for my optimism is Norway’s training culture and a tradition for physical conditioning.

“Physical strength is essential in modern handball and Norway has been applying it for a long time. You can also see it in the way our country´s young talents are being trained and developed.

“Of course, you should never take success for granted, but there is no risk that our current coaching duo, Thorir Hergeirsson and Mia Hermansson Högdahl, will ever do that.

“Therefore, I think the future of Norwegian women´s handball is in good hands,” says Marit Malm Frafjord who may – or may not – have ended her outstanding handball career for good.