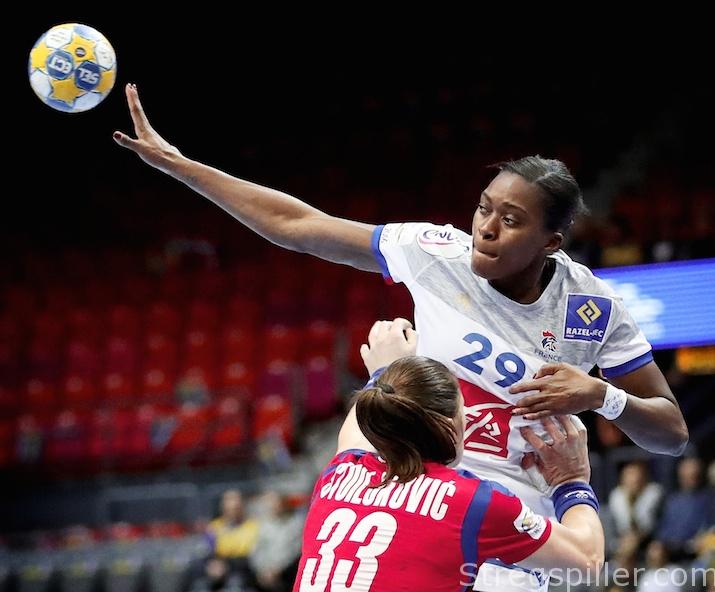 MATCH REVIEW – Despite being three goals down with two and a half minutes left, CSM Bucuresti kept their Champions League hopes alive, as they came back and drew 26:26 against Larvik.

An improving Gnonsiane Niombla scored the equalizer with 20 seconds left on the game clock.

Ruling Champions League winners CSM were starting their main round quest from last position in their group.

CSM were missing right back Line Jørgensen and substitute right-wing Cristina Varzaru due to injury.

When you are three goals down with two and a half minutes left, you should be content with a draw, and as the match turned out, this is exactly what CSM achieved.

Larvik, on the other hand, would have probably been happy with one point before a difficult road game, but having squandered a five-goal lead in the second half, the visitors can hardly be satisfied.

Larvik seemed to be better at coping with their injury problems, compared to CSM.

The first 30 minutes became an equal affair with changing leads.  There were never more than two goals separating the teams.

In fact, it was CSM who enjoyed a two-goal advantage at 9:7 and 10:8 midway through the match.  However, as Larvik’s keeper Sandra Toft improved her performance, the Scandinavians got back into the game and took a one goal lead right at the half time, courtesy of Kristine Breistøl´s buzzer beater.

Apart from Sandra Toft in goal, Larvik’s right side of the attack was dominating, with Linn-Kristin Riegelhuth Koren and Amanda Kurtovic scoring four goals each.

CSM, on the other hand, could thank their Swedish players for staying alive.  Playmaker Isabelle Gulldén and left-back Linnea Torstensson added three goals each.

Yet, CSM managed to cut the deficit, and Gnonisane Niombla played her part in it.

After not scoring a single goal in the first 40 minutes, the French international scored five in the last 17 minutes, deserving much of the credit for CSM´s timely comeback.

Ultimately, the Romanian club caught up when Isabelle Gulldén – she appeared to have completely recovered from her long-lasting thigh injury – scored the equalizer (21:21) with 10 minutes left.

Larvik took the initiative once again, and when Tine Stange broke through CSM’s defense increasing the visitors’ lead to three with two and a half minutes left to play, the match seemed to be decided.

But Carmen Martin reduced to 24:26 and Gulldén made it 25:26 shortly thereafter. The home team had caught a second wind, and with 20 seconds left, Niombla secured a critical point.

She may have needed 14 shots for her seven goals, still, Amanda Kurtovic and her dangerous left-hand shots kept Larvik in the match and in the lead for long periods in the game.

Once Gnonsiane Niombla found her bearings and started scoring goals, CSM was able to establish the necessary pressure from their-back court line, to catch up with their opponents.

With her five goals in the last 17 minutes, the 26-year-old changed the course of the game.

Having trailed throughout the second half, CSM should be content with one point, as it keeps their hopes of a quarter-final berth in tact.

With only three points, however, the Romanian champions are under pressure, missing Line Jørgensen´s powerful shots from right back position. Camille Ayglon did not manage to fill the void – not in the match against the Norwegian champion.

Larvik and their coach Tor Odvar Moen, in particular, deserve much credit for getting the utmost from a depleted squad.

After opening the main round with a draw on difficult terrain, Larvik´s quarter-final chances look promising.