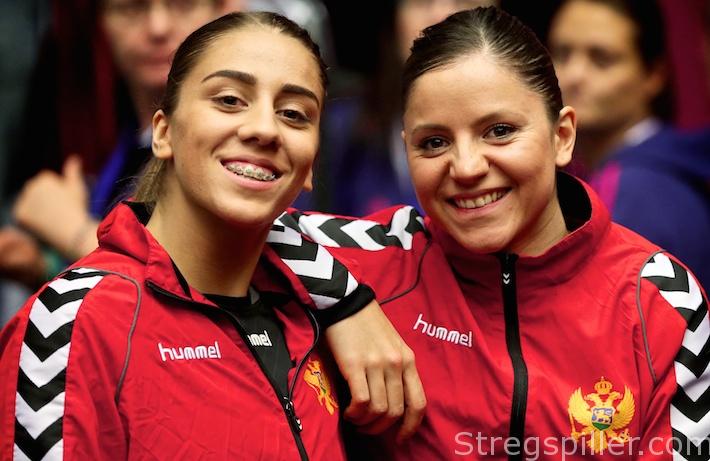 Buducnost had no difficulties winning 28:18 on the road against FC Midtjylland, re-take the lead in Group 2 and secure the quarter-finals.

With a win, Buducnost would not only secure their quarter-final berth, but also take back first place in Group 2. Being fifth, two points behind CSM Bucuresti, FC Midtjylland was under pressure with regards to reaching the quarter-final.  Furthermore, the Danish champions have been facing severe scoring problems as of late, having scored only 17 goals in each one of their most recent matches in the Danish league – a 17:17 draw at home against Viborg HK and a 20:17 defeat away in HC Odense.

Midtjylland was still missing right-back Louise Burgaard, while right-wing Radmilla Petrovic and left-wing Biljana Pavicevic were absent on Buducnost’s side, due to illness.

The absence of Petrovic and Pavicevic was no handicap at all for Buducnost, who practically dominated the entire match, in front of 1,532 spectators, in Ikast.

Actually, the squad from Podgorica was not encountering any problems during the game, not even when playing with one player less.  In fact, the Danish crew was particularly poor in exploiting those periods in the match when Buducnost was one player down.  Despite Buducnost’s clear lead throughout the game, it was impressive to see their entire bench standing and celebrating each and every successful moment until the very end.

The favorites from Buducnost took the initiative quickly.  Even without playing fantastic handball, they benefited from the many mistakes, Midtjylland made in attack and despite a good start from Sabine Englert in goal, Buducnost soon got up 5:2 and 7:3.

Midtjylland’s coach Helle Thomsen kept searching in her toolbox, trying to find solutions against a strong Buducnost defense, but without much success.  Louise Burgaard was on her club’s team sheet, but just as expected, she was not going to play.  The only dramatic incident of the first half occurred when Buducnost’s goalkeeper Marta Zderic got sent off with a direct red card for interfering with a Midtjylland counter attack.  But the expulsion shook the team from Montenegro only for a brief moment – by half time, the visitors were leading by four goals, 13:9.

Coach Thomsen tried playing seven against six when in attack and 5-1 on the defensive end, but both measures did not produce the desired results.  Instead, Buducnost continued to increase their lead throughout the last half hour of the match.

“Even though we are now in the quarter-final, our match again Gyor next weekend will still be crucial to us, partly because it may decide first place in our group,” Buducnost coach Dragan Adzic told stregspiller.com.

Here we are referring to the away “crowd”.  It was impossible to not be impressed by the 100 Montenegrins or so, who made the long trip from Podgorica to support their team.  They did it enthusiastically all the way.

Buducnost is in the quarter-final and can now focus on securing as good a place as possible in their main round group.  Their next game at home against Gyor, next Sunday will be very decisive.  If FC Midtjylland wants to keep their quarter-final dreams alive, they must win the Scandiavian derby against Savehof this coming Friday.

There were no surprises in Saturday’s matches in the Main Round of Group 2 of the Women´s Champions League.  Gyor won by six at home against CSM Bucuresti, while Vardar defeated Savehof decisively.

With nine points on record, Gyor was in the better position, compared to CSM´s seven.  However, the Champions League winner from 2013 and 2014 could hardly live with a defeat at home.  Both teams were handicapped, missing several key players. Gyor, was without two important back court players (Anita Görbicz and Zsuzsanna Tomori), while the visitors had to replace the two Danish internationals Line Jørgensen and Maria Fisker.  Earlier today it was announced that CSM would have to do without Fisker after this season, as she is returning home to Denmark where she signed a two-year contract with Randers HK.

After a few problems at the start, Gyor dominated the match especially in the second half.  The absence of certain key players was felt heavier at CSM Bucuresti.  Gyor enjoyed extended leads throughout the second half before settling for a six-goal victory in front of 5,000 loud spectators.

CSM got off to the better start in the Audi Arena, leading 3:1 and 4:2, but Gyor soon got their 4-2 defense working and took the initiative.  Three consecutive goals provided the Hungarian’s their first lead (5:4), and they did not look back for the rest of the half.

After the break, Gyor left no doubt which team would win this encounter.  Led on by Nycke Groot, Eduarda Amorim and Yvette Broch – Gyor’s most outstanding players this afternoon – the host was soon able to increase their lead and secure the win.  Gyor’s defense was now changing between 6-0 and 5-1 and put significant pressure on Gullden & Co.  Bucuresti produced numerous turnovers, resulting in easy goals for the Hungarian handball powerhouse.

Gyor can spend at least spend one night in first place, with 11 points.   That elusive number one spot may be lost again in case of a Buducnost win against FC Midtjylland on Sunday afternoon.  Next weekend, Gyor will play away against the Montenegrin dream team, in a match that may very well decide the winner of Group 2.   Being fourth with seven points, CSM Bucuresti must still fear for their quarter-final berth.  The game at home against Vardar, on February 16th may be crucial in that respect.

Vardar had a few issues at the beginning, in the first Champions League game without Danish coach Jan Pytlick on the bench.  Savehof was quickly leading 1:0 and 2:1 and the Swedish visitors were able to keep up with the home team until 8:8.

However, this was as long as Vardar was content with keeping a tight match.  Six straight Vardar goals changed the score to a 14:8 lead for the hosts.  In the second half the intensity of the match somewhat dropped.  Vardar had their largest margin of difference at 14 goals, before the two teams began trading goals until the final score was settled in favor of the Macedonian champion.

Through the victory, Vardar advanced into third position in Group 2 (8 points).  Their home match against CSM Bucuresti in 10 days will probably decide the ranking going into the quarter-final.  Speaking of it – quarter-final participation has not been in the cards for Savehof for quite some time.  The Swedish record champs may have their best chance to score their first main round points when FC Midtjylland visits them next Friday.