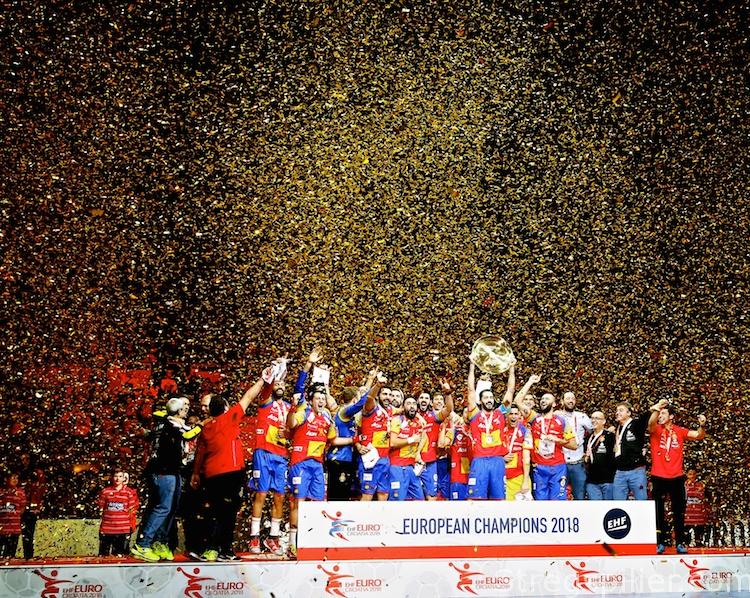 No sleep tonight for Dani & Co.

Finally, after four unsuccessful attempts and a devastating loss against the underdog from Germany, in the 2016 final, Spain captured the EHF EURO 2018, following  an outstandingc defensive effort in the second half, while shutting down Sweden’s offense.

After the match, I had the chance to talk to Spanish playmaker legend, Dani Sarmiento. and well,

Congratulations – finally you are European champions!

DS: Thank you. To be honest it was a very strange game, with two very different halves. In the first one we could still feel the physical strain from the match against France, as the first half today was as demanding from a physical perspective. Then it got much better, we created some fast-breaks, and with every additional minute we felt more comfortable in defense.  We were able to steal many balls and achieved some easy goals. Our team got more faith; we stayed patient and in the end it was just great. Leading by a big margin in the final minutes calmed us down – we are the champions, now.

DA: Yes – a lot of things were going through our mind: the final of Poland, the Olympic qualification tournament in Sweden, when we weren’t able to qualify. All the things that happened to Spanish handball over these past few years. But the most important take away today, for us, for the country, for handball in Spain, is that we can still win.   It was very hard against Slowenia, but the team grew stronger and stronger with every game that went by.  We left our heart on the court and in the end we won the championship. I can say that this is possibly be the most important tournament in the history of Spanish handball.

DS: Yes, yes, it is.  Actually, we were trying so hard to finally win this title. after coming close so many times. We already participated in four finals and we lost four times.  It’s moving, it’s hard, isn’t it?  I am extremely happy, we made it and we qualified for the Word Championship in 2019. We will be there and we will try to be even better, but for now we have written Spanish handball history.

Will you find any sleep tonight?