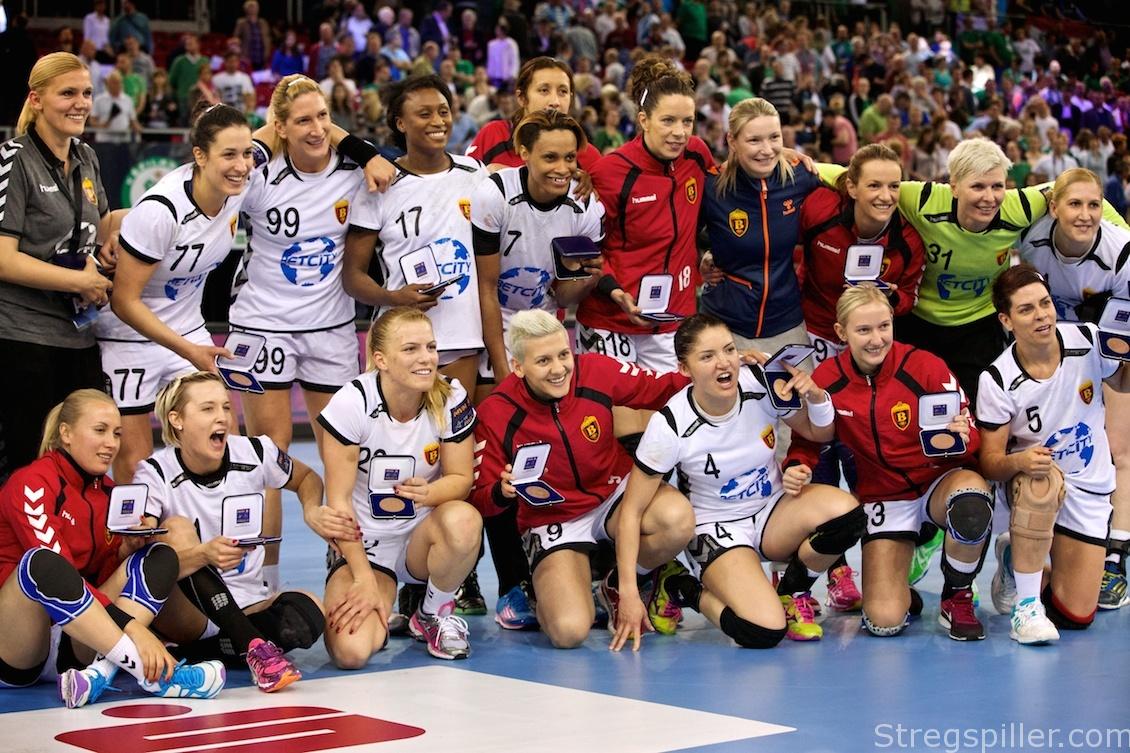 INTERVIEW – After three consecutive third places at the Champions League FINAL4, Andrea Lekic wants more and something better for her club Vardar at the end of this season, she tells stregspiller.com in this exclusive interview.  She also reveals that she would be happy to play for Serbia again if only given the chance.

Three times has the Women´s Champions League been decided in a FINAL4 format.  HC Vardar Skopje was there in Budapest on all three occasions and every time did the Macedonian handball powerhouse finish in third place.
One of Vardar´s absolute key players, Andrea Lekic, is tired of this kind of consistency.

“I am asked all the time if I expect us to finish third again this year, and I certainly do not!” she says.

We will get back to this statement.  Apart from the curse of an “eternal” third place, the 29-year-old playmaker is actually very satisfied in Vardar, and she is particularly pleased with her team´s Champions League campaign so far this season.  Rightly so, as Vardar starts the main round at the end of this month with seven points on top of their group.

“I think we can be content with our Champions League season so far.
“We got off to a poor start with our draw (27:27, ed.) at home against Ferencvaros, but I think that was our only really poor performance in the group matches.
“In fact, I think we got better and better as the group phase went on, and our last group match, away against Ferencvaros was our masterpiece so far,” she says, recalling Vardar´s stunning 37:24 victory in Hungary on November 13.

She does not say it herself, but Vardar´s improving form curve during the fall had a lot to do with her own return to the court following a long injury break.
In the semi-final against CSM Bucuresti in the FINAL4 in May of last year, she tore her Achilles tendon and was sidelined until a few months ago, meaning that she also missed the first Champions League matches with her club.

“I should not complain, though, as this was my first real serious injury, and when I had surgery for my Achilles tendon in May, it was the first time in my career, I had to undergo an operation.
“However, while I was in rehabilitation training after the medical procedure, I suffered a meniscus injury, which obviously delayed my comeback a lot, and this made it really hard.
“During that break, I learned how much you can really miss playing handball and being part of the action – when you are outside and can do nothing about the things that happen on the court,” she says.
“Now, I finally feel that I am back at my best again.  I feel I am top fit physically and mentally and that my game is back to the level before I was injured,” says Andrea Lekic.

Starting main round with key match

Considering Vardar´s position ahead of the Champions League main round, it comes as no surprise that she is quite optimistic on behalf of her team´s chances in their group.

“Our first match at home against Buducnost who are second, one point behind us, will probably be key.
“Already in a week´s time, we meet them in the regional league, and that match may very well give us an indication of our chances, but I think they are good, although Buducnost should obviously always be taken very seriously.
“This also applies to our second opponent – Metz – as well.  They played a very strong group phase.
“Metz plays a fast and flowing attack, and I very much like their way of playing handball.  They will definitely be a tough hurdle for us to overcome, especially on their home court.
Our third opponent, Thüringer HC practice what I would call a typical German kind of handball, and they could absolutely become a challenge too.
“However, it is pretty obvious that we want to finish on top of our group in order to get the easiest possible opponent in the quarter-final.  Our ultimate objective is to qualify for the FINAL4 again,” states Andrea Lekic.

The curse of third place

And this brings us back to the “eternal” third place question, which has been all Vardar could accomplish over the past three years.

“I have had to comment on it a lot of times, but all I can really say is that very small details usually decide the FINAL4.
“For instance, who could have foreseen that CSM Bucuresti would win the FINAL4 last year as Champions League debutants?
“The top in women´s club handball in Europe is so close these days, that simply reaching the FINAL4 is a big achievement in itself.  Obviously this is our first objective.  Then we will have to see if we can do better than third place, or if I will have to comment on it again,” says Andrea Lekic and laughs.

She already has one Champions League title on her CV, as she was part of the team in Gyor, when the Hungarian team won the tournament for the first time in 2013.  By the time Gyor repeated the triumph in the following year, she had already moved on to Vardar, where she is currently playing her fourth season.

“Of course, I remember what it was like to win the Champions League.  It was fantastic, and I am often reminded on it, as people still ask me what it was like – how we celebrated etc.
“I would really love to experience this feeling again, and I would really like to win the Champions League with Vardar, not the least because there are so many of our players who have never been there, and I really wish for them to experience the triumph,” she says.

National team? Yes, please – if only the coach would give me a call!

Andrea Lekic also has time and energy left to take care of other issues than her own career.  Each summer, she arranges a handball camp for children and youngsters in her homeland Serbia, and even last summer, while recovering from her Achilles tendon injury, she hosted her annual event.

“I find it important for us top players to be good examples and role models to young people, and ever since I played in Krim five years ago, I have found it important to give children a good handball experience – and it really pays off, when you see all those smiling and happy children!” she says.

Even though she probably still is Serbia´s best female handball player, she does not play for her country and has not done so for quite a while now.  Even after Sasa Boskovic – who was not equally popular with all players – was replaced with Dragica Djuric, has Lekic returned to the Serbian national handball team.  Many people believe that she has dumped the national team on her own.

“This is a misunderstanding.  I and some other players seem to have been eliminated from the list.  Anyway, we never received another call,” says Andrea Lekic who confirms that she would be happy to play for Serbia again.

“Yes, sure I would, if only the coach would give me a call!”