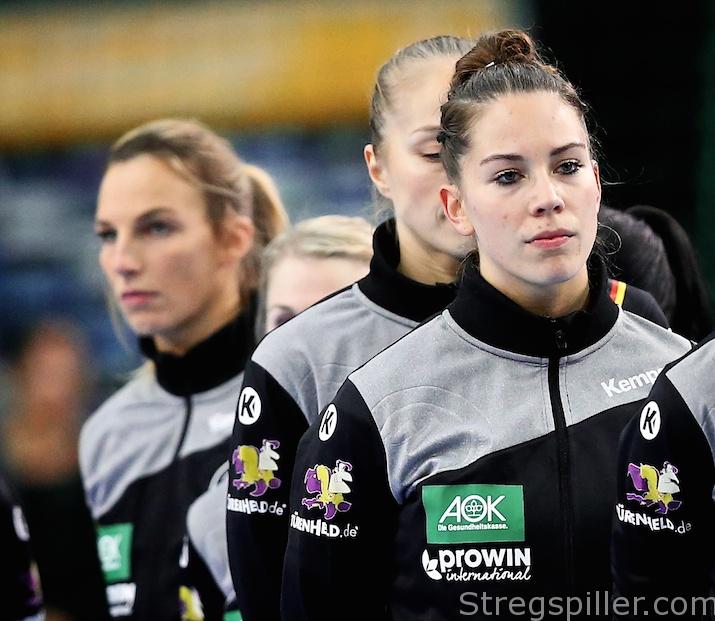 Being just 19 years old it’s quite a burden if a whole handball nation expects you to be the decisive factor, leading your team to the promised land and winning a medal at the World championship, on home soil. But Emily Bölk couldn’t help her team too much so far because of a minor injury. With the top match against The Netherlands coming up later on Saturday, there’s hardly any time left for her to get back into perfect shape.

You played only a few minutes against Serbia, then a bit more against China. For a player it’s important to have some kind of rhythm, and getting a feeling for the game. How far away are you from “being into it”, right now?

EB: That’s true. At the moment I’m trying to find my rhythm. I’m happy about the minutes I got against China, and that I was able to score some goals. I think it was a step into the right direction and now I hope more training sessions will help me getting back to the highest level in the Round of Last 16.

Well, a game against the Netherlands might not be the perfect occasion for trying to find your rhythm?

EB: That’s absolutely right, but with the help of the crowd, I think a lot will be possible – finally it’s a real European opponent. Especially, when you consider a more backward oriented defense. That’s what I’m used to, that’s what’s better for me as a back-court shooter. That’s why I think it will help me getting into my moves which benefit my style of play.

In general, I miss a little bit of courage when it comes to squeezing by the opponent’s defense from the back-court positions. Would you agree with the observation?

EB: Yes, I do.  So far, we have played outstanding defense, backed by two awesome goalkeepers. That’s where we found our self-confidence.  Now, it’s all about using this self-confidence when playing offense.  Sure, it’s unusual to play against these kind of defense systems (i.e. China ed.) and we can do better. For Xenia Smits and me, in particular, it was important to have some good actions as we had against China. Now, we are ready to take off after our injuries.

Talking about the game against The Netherlands – the Dutch players have some exceptional qualities. Which one of those qualities are the most important and what do you have to do to shut them down if you want to win the game?

EB: I think it’s probably their back-court. They play a very fast ball  and know each other extremely well.  They were very successful in recent years; they also established clear goals before coming here, fighting for medals. It will be very tough to beat them, but we will be well prepared and I’m optimistic we will have enough solutions once the game starts.

When I talked to Tess Wester, the Dutch goalkeeper, she told me it might not be as much of an advantage knowing the opponent’s shooters so well, because, as she put it, “they are not dumb”. Who got the advantage?

EB: Well, I think when we play against Clara Woltering, Katja Kramarczyk or Dinah Eckerle in the league you see that they know us well from so many training sessions – if you ask me the goalkeepers have an advantage. Tess also knows us well – she knows where we prefer to shoot. Sure, it’s a different defense compared to what she is used to at her home club, but overall it’s definitely no disadvantage for her.