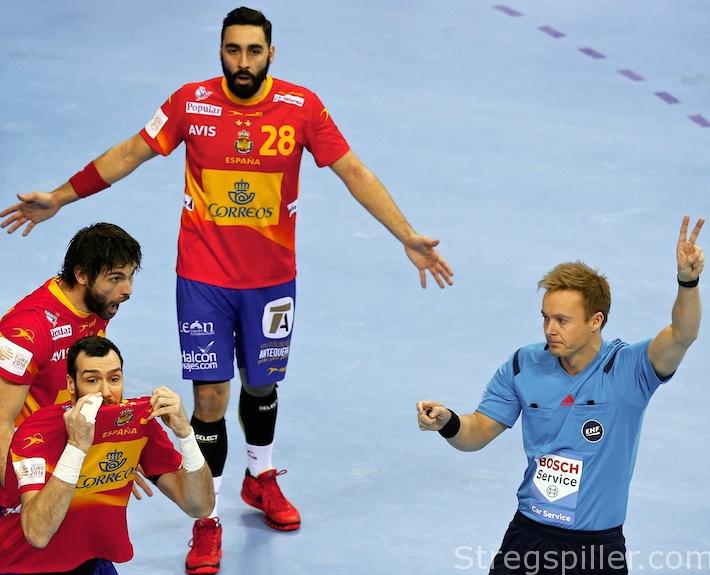 No time for transition

When France, Germany and the eventual winner, Denmark, were fighting for Olympic Gold back in August, one major handball power was missing out on the party, Spain.  The 2013 World champion and runner-cup at the EHF Euro 2016 didn’t qualify for the Rio games and wasn’t too happy about it.  But it could turn into Spain’s advantage at the World Cup in France, as they come into the tournament on rather fresh legs.

Spain is not only rested, but also presents a new coach.  It’s the first major competition for Jordi Ribera.  He was at the helm in Brazil during the last four years and follows Manolo Cadenas, who won two medals, Bronze and Silver, at the 2014 and 2016 EURO’s, as head coach of the Spanish squad.  While it’s not as “difficult” to guide a team like Brazil, Spain is a different matter.

Sure, Brazil had a lot of pressure going into the Olympics on home soil, but everyone knew that reaching the quarterfinals was probably the maximum the could achieve.  Leading Spain means that everybody expects you to make the semi-finals.  And I’m quite sure that the team consists of various complex characters, as many players on the roster are true handball superstars, like Julen Aguinagalde, Victor Tomas or Raul Entrerrios.

Some of the older players decided to end their international careers, like Arpad Sterbik, the charismatic goalkeeper.  Cristian Ugalde is no longer a part of the team, as is Jorge Marqueda.  Younger players will need to step up, and this shouldn’t be a problem.  In goal, Gonzalo Perez de Vargas and Rodrigo Corrales will form one of the best duos in the world.  Still, a lot of leadership will be missed.

And there’s just no time in Spanish handball to switch from one generation to the next in an orderly fashion.  The team needs to perform after the stunning loss to a young German team at EURO 2016, in Krakow, one year ago.  Thanks to a favorable draw, Spain will face rather easy opponents.  Slovenia will travel to France without Dean Bombac and veteran player Uros Zorman, he prefers to stay home to get some  rest, before a long season continues in early February.  And Iceland is still totally dependent on a healthy Aron Palmarsson.

Maybe Macedonia could be a threat in a single game, but everything has to go right for Kiril Lazarov & Co to beat Spain.  Tunisia, and Angola, shouldn’t cause any concerns.  The Spaniards will get five games to find their rhythm.  This should be enough for a quality squad like them.  Will it be enough to beat France, Germany and Denmark?  I’m not so sure.  But while some star players are gone, Joan Canellas and the above mentioned veterans still know how to play handball and close out a match.

Right now, a muscular injury of Raul Entrerrios appears to be more of an issue for Spain than the opponents during the group stage.  He injured himself in a test match just a few days ago and could be sidelined for up to two weeks.  My guess, he will be rested until the very last game of the group stage, then he’ll see a couple of minutes to get the feeling and eventually try to lead his team to glory, like he almost did a year ago when he was named the MVP of EURO 2016.

Spain will either be upset in the quarterfinals or finish 4th, at least that’s what I expect.  I don’t see the team defeat the “Big Three”, but they are still good enough to beat everyone else.  However, if the players of Jordi Ribera lose focus, nations like Russia, Norway or Sweden could easily inflict some serious damage.  No matter how you look at it, Spain doesn’t have any time for transition. When you’re used to go deep into a tournament, missing an event like the Olympics results in even more pressure, next time a prestigious trophy is up for grabs.  The time is now.