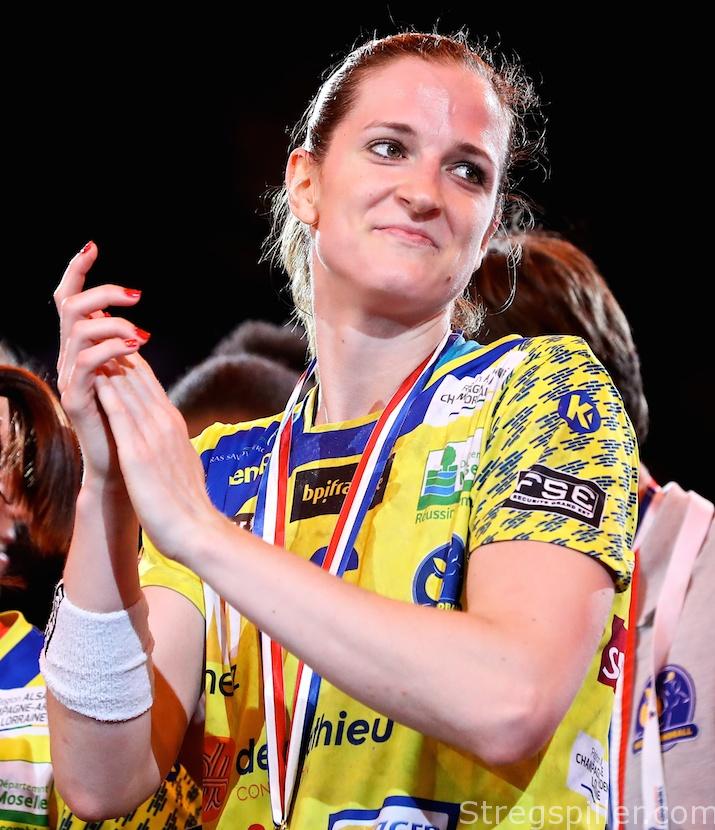 INTERVIEW – Ana Gros has no second thoughts about her transfer from Metz to Brest before this season, despite her former team’s success in the 2018/19 Champions League season, while her current club does not have a chance to reach the quarter-finals anymore.

“I like to be a part of building a new strong team here in Brest,” is her explanation in this exclusive interview with stregspiller.com.

Edith Piaf sang the song for the first time in 1960 and today, Ana Gros may follow her tune – sort of.

For sure, the 28-year-old Slovenian right back will be able to sing it in French, as she speaks the language fluently after nearly seven years in France.

Is there any reason to regret the two-year contract she signed with Brest before this season? Her former club seems to be heading straight to the FINAL4 of the Women´s Champions League as the first French team in history, while her new employer is out of the race for the quarter-final.

“No, I do not regret my decision and the move from Metz to Brest.

“Of course, Metz have been doing better than us this season – in the Champions League as well as in the French league – but I am sure our time will come.

“Furthermore, I really like it here in Brest. It is a good club, the other girls here are nice and besides all of it, I enjoy living by the sea. It’s another part of France compared to what I have been used to,” Ana Gros tells stregspiller.com.

“Of course, there were some people who did not understand why I was leaving Metz and join their strongest rival in France, but I felt that I needed a change.  At the same time, it was important to me that I remain in France, where I like to be and where I speak the language.

“That said, life in Brest is very different from the one in Metz.

“In Metz, you could say that it was a bit like living in Germany, where I stayed a couple of years when I played for Thüringer HC.

“Here in Brest, by the coast, it’s different and maybe a bit more relaxing,” she finds.

The appeal of building a new team

Not only have Metz been doing better than Brest this season, but the club from the west coast of France lost big time against Metz in the French league as well as in the Champions League.  Those losses hurt and Ana Gros agrees.

“It’s obvious that Metz have done much better this season than us.  Of course, it’s painful because they are our toughest rivals.

“However, I really wish them all the best for the rest of their Champions League campaign. For France, I think it would great to finally have a team in the FINAL4.  I think it would only be a logical development, when you look at the success of the French national team at the most recent championships.  It makes sense that France enjoys the same success on the club level as well.

“I only hope we can follow in the footsteps of Metz soon – ideally, as early as next season.

“At least this year, we did better in the Champions League compared to last season, where the team was eliminated after the group phase without a single win.  I don’t see why we wouldn’t do better next season, when I expect us to have an even stronger team,” she says, referring to the addition of Danish national team goalkeeper, Sandra Toft, who will join from Team Esbjerg.

“I like to be part of building a new and strong team here in Brest and I am patient about it. I know that such developments take time. In Metz, it also took some time before we had the team that could compete with the best in Europe.  I truly believe we can do the same here in Brest, although things may not have been going our way this season,” says the 185 cm tall Slovenian international.

Currently, she still is the top scorer in the Women´s Champions League with 69 goals, one more than Czech international, Iveta Luzumova, from Thüringer HC.

“I was particularly happy with some of my games back in the fall. No player can perform at her peak all the time – in general, I am satisfied with what I have done here.

“I know what I am here for. I am a goal-getter and I do my best to fit this role, although to me it doesn’t matter so much who scores the goals as long as we score enough of them,” she says.

Ana Gros admits that she is fond of France and the way of life.  It’s also a major reason, why she has stayed in the country for almost seven years.

“When I consider my future, I would absolutely like to stay in France at least for a while.

“Currently, I have one year left on my contract with Brest.  Of course, it’s too early to say what happens thereafter.  You never know when some better opportunities turn up, but I like it in France and as I said, I like to be part of building a new team here in Brest, where I see a bright future.

“I definitely do not regret my decision to be here,” emphasizes Ana Gros.