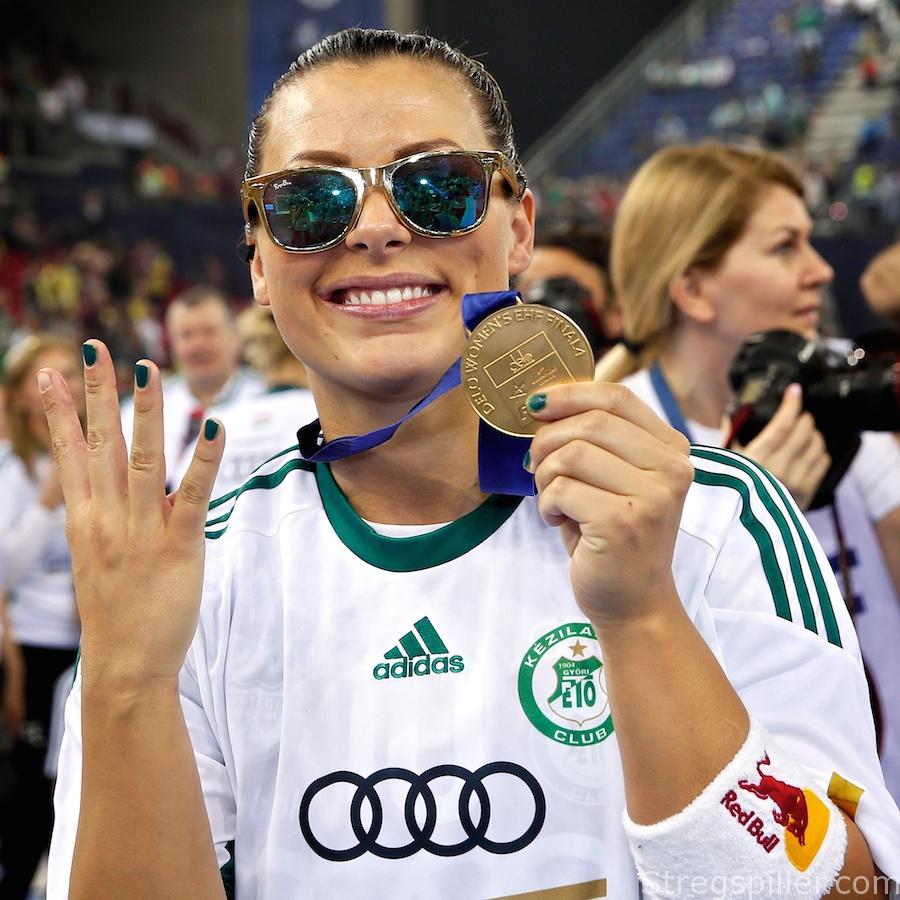 Nora Mørk: “The beast is going to come out”

Last June, we pondered Nora Mørk’s move to Vipers Kristiansand, for family reasons, and figured that it could be a perfect transition if the stars aligned. Few could have predicted things to go this well, however.

In April, the 30-year-old returned to action after an injury scare and guided a Vipers team, completely bereft of competitive action, to a remarkable quarter-final win over Rostov-Don, booking the club’s second trip to the DELO EHF FINAL4 in Budapest.

“It was quite difficult. I had a small injury in the previous game against Rostov and, of course, everybody including me was expecting the worst. But finally, I had some luck and I needed rest, I was out for eight weeks and felt my knee was stable again but I hadn’t been practicing handball with contact for more than one week or so, so my body felt like it just went through pre-season all over again.

“And to play a quarter-final against Rostov, two matches in Russia with a full house, it’s exciting, right now it’s like travelling back in time with spectators. I played better than I did in the trainings, let’s just say that,” Mørk says with a laugh.

We can only imagine what happened in those training sessions then, but her performance in the back-to-back games spoke for itself with 14 goals.

A true display of mental fortitude for an athlete with 10 knee surgeries behind her, diving right back into the deep end and leading Vipers to a seven-goal aggregate win.

“I think it was a lot of preparation, mentally, I have played many games like that before, so I know I can perform at my best when there is the most pressure – it was exciting. Also for us, we found out on the same day that Vyakhireva would not play which is a huge advantage for us because she is one of the greatest players and creates a lot for Rostov.

“Then we thought to ourselves, OK, now we can really attack them. We looked like we had a lot of experience out there. We were calm and efficient in the first game, which was crucial for us to get the seven-goal difference and I knew we wouldn’t be able to waste that opportunity. It was a great victory for the club.”

Something we saw the right back do for the first time in a while was get involved in defence. Usually held back for attacking purposes only, Mørk got stuck in at the other end of the court and appeared to relish the opportunity.

“Yeah actually, before I tore my ACL, I played quite a lot of defence for Györ and if, let’s say I have a more free role because you know I will never block any player, so if I am free, I am quick on my feet and can play defence.

“Løke and I were switching, I hadn’t played for two months and she hasn’t played for four months, whenever we could or whenever she needed two minutes. So I was just happy I could help but now in trainings, I’ve been practicing it quite a lot, in case that happens.”

Race to get in shape

When the news broke last year that she was heading home, Mørk revealed to Norway’s TV2 that her mother was diagnosed with breast cancer.

In Norway, COVID regulations have been among the strictest in Europe, coming to a head at the turn of the year as the national league was suspended and foreign clubs not allowed to visit for matches, resulting in a season full of mixed emotions.

“It’s been so good to see my family so much and also be closer to them, that was the most important thing for me.

“On the other hand, it’s been very frustrating not to be playing almost anything in the Norwegian league and only away games in the Champions League, so for me as a player who wants to be in shape, it’s not optimal and I also want to be in top form heading into the Olympics, which is hard when you don’t play the games.

“Here in Vipers, we haven’t had any COVID cases and we’re all healthy, which is something, I guess, but it is a bit frustrating because I want to be the best and be in the best shape and now we just have to make the most out of it and hopefully we’ll be ready and healthy for the Olympics too.”

In February, Kristiansand went on a five-game trip, lasting 11 days, to finish their group phase campaign. Three defeats and an injury to Mørk left their FINAL4 hopes looking diminished.

After surviving a fascinating play-off battle with Odense, Vipers were almost back to full strength for the quarter-final and showed us all just how dangerous they are.

“We went on this European tour and I think when we lost two times against FTC, nobody expected, including us, that we would be in the FINAL4 but when we have our full squad, though we are missing one of our best defenders in Silje Waade, then we have a good team. Løke is back, which is a huge advantage for us as we can count on her in these big games.

“We go to the FINAL4 with our goal to get there achieved already, so I think we should just enjoy it and see what happens. I know myself that when I get there, the beast is going to come out, so we’ll see, the other teams are very strong too.”

In the quarter-final and EHF EURO 2020 last December, many were delighted to see the Nora Mørk they know and love on court but there is plenty more to come.

“I still feel I have some way to go but it has been quite a tough two years, actually, not to be able to be at the top level and my injuries have been crucial and limiting the opportunity to get better.

“But I think in the quarter-finals, you could see a glimpse of the old me and what I can do. I’m the type of player who wants to get better, it doesn’t matter if I’m getting older, I just need to get better.

“I feel like I’m getting there, there were some moments at the European Championship where I was doing the best I could at that time but I know I have more and I hope I will be in my best shape again at the Olympics, especially from nine metres, that’s something I’ve been working on because it has been hard being out for so long. Having that confidence and efficiency, that’s what I need.”

While Mørk recovered from the minor injury sustained in February, Norway followed their dominant performances at the EURO with a shaky weekend in Montenegro to qualify for the Tokyo Olympics, which at the end of the day is what 2021 is really all about for her.

“Yes, I’m not going to lie. I think it’s perfect that we qualified for the FINAL4 because then we get a weekend of top-quality handball and we get to experience the pressure and everything around it.

“I’m excited and I think everybody who knows me, knows that this is going to be a very important summer, for sure.”

Unsurprisingly, there is a serious Norwegian flair to the final weekend in Budapest with 11 likely members of the Olympic squad competing for Vipers and Györ.

“It’s amazing, we’ve had national team meetings and we’re all very satisfied there are so many Norwegian players playing that weekend. There’s a good chance of Norwegian winners and it’s also good practice.”

Excited to connect with Gulldén and Pena

Mørk recently signed another one-year contract with Vipers in a period of change for the Norwegian club. The team will have a bit of a different look to it with Bella Gulldén and Nerea Pena among the players joining this summer, while Henny Reistad, Malin Aune and Emilie Hegh Arntzen are moving abroad.

“For me, it was really important to get top players here, especially as we are losing Henny, who is in the best shape of her life and is still very young, so it’s a big loss to lose her and the other players.

“But I think Gulldén and Pena can be a good fit, especially for me, who likes to be close to the goal and play with the pivot, they do the same, so although it will be different, I think it can be really good. I think we’re all excited.”

It was 2016 when the Norwegian star left a Larvik side in deepening financial woes for Györ and a return home to a successful club was an unlikely prospect.

“When I left Larvik, the plan was to stay abroad for a long time. Now I’m back in Norway for different reasons but I can see myself playing abroad again. But no, maybe I didn’t expect Vipers to be that good so fast, so it was a nice plus because there was no chance for me to continue in Bucharest due to the situation at home, so I am very happy about it.”

Pain in the ass for opponents

Looking ahead to this weekend’s DELO EHF FINAL4, both Vipers and their opponents CSKA must have both been happy with the draw, knowing they have a chance to claim a place in the final and let Brest and Györ go at it in the other semi-final.

When Kristiansand made their debut at the event in 2019, they were ecstatic with a bronze medal but this season’s squad seems destined for something greater.

“We mainly focus on the semi-final against CSKA but I do think that we have a good mix of young players and experienced players. Lunde, Løke, Sulland, Knedlikova and I have been there many times before and we’ve also been able to win. I don’t see us as underdogs for the FINAL4.  Ok Györ are maybe the favourites, which is natural, but I think we can be a pain in the ass to meet because we run a lot and we have been preparing ourselves since the quarter-finals.

“I love to play with a full house and a huge crowd, that’s what gets me going and I really enjoy it. I know it is a big advantage for Györ and I know the feeling of playing there with the home team and it gives you extra energy. But I’ve been on the other side of so many semi-finals and finals, I don’t notice that much if they are against us or not.

“We have a strong team with many players who have been able to help, so I don’t see us as total underdogs but a little bit, then again, we have experience, so it’s possible to stir things up in Budapest,” concludes Mørk.