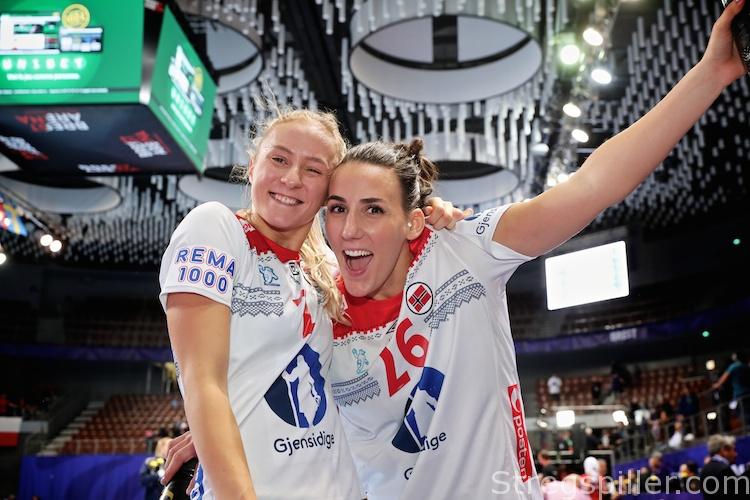 Norway back in the driver’s seat

MATCH REVIEW – Norway were back in the driver’s seat, but the opposition was modest, as the Scandinavian’s swept the Czech Republic – especially in the first half

*Both teams needed a win following respective losses in the opening round of the tournament.

*Norway´s coach, Thorir Hergeirsson, had called up 32-year-old veteran, Camilla Herrem, from second division club Sola as a third left wing in his squad, in addition to Sanna Solberg and Thea Mørk. The move begs the question if Thea Mørk is not entirely fit to play after her injury that kept her out of the match against Germany? But, Mørk’s name was still listed on Norway’s team sheet.

It was Norway all the way – playing the kind of handball that spectators have grown used to.

Once again, they executed their fast breaks with much more speed and purpose, the attack was back to a normal pace, and on the other end of the court, defense was remarkably tighter when compared to the match against Germany, two days earlier.

It must be mentioned that the opposition was much more modest, especially when considering what Germany had to offer. Still, it became clear quickly that this Norwegian team was eager to erase the bad memories of the loss in the opening round of the competition.

From the start, Norway were back to their normal game after their disappointing effort against Germany, on Saturday.

However, the Czech Republic helped a great deal and did not offer not much resistance to stem the tide.

A series of poor shots, which did not cause any trouble for Norway’s veteran goalkeeper, Katrine Lunde, got their feared fast-breaks going. And, a rather weak Czech defense was the yet another factor that allowed Oftedal & Co. to stay in firm control.

The Czechs were only able to follow their opponent until 2:2. From that point onward, it was all Norway. Six goals in a row, from 10:7 to 16:7, the reigning champion effectively decided the game.

The fact, that Kari Brattset received a two two-minute suspension and an unjustifiable red card for Marit Rønsberg Jacobsen with three minutes left in the first half, did nothing to worry Norway. Their 10-goal lead at the buzzer was not one goal too many.

It’s not reasonable to expect intensity in a match, that continues with one team tailing by a ten-goal margin.

On the other hand, Norway stayed focused and deserved credit for not relaxing. Often, this kind of game ends with the winning team succeeding by three or four goals. Not so on Monday, as Norway carried on all the way to the end.

“It was good that we did considerably better compared to our previous match.

“There were ups and downs with regards to my own performance, but even so, it went much better for me as well than last time.

“I think we were a bit scared because we expected Norway to come out with a vengeance after their defeat to Germany.

“That’s probably one of the reasons, why we played so poorly in first half.

“However, I think that we did better in the second half and that’s what we must take with to the deciding game against Germany.

“In this match, we will definitely not be frightened. Now, it’s all or nothing – it’s that simple.”

The big margin of difference between the two teams helped in one way. It assured that the referees did no get a chance to become a deciding factor, as the two Swedes, Maria and Safia Bennani certainly did not have their best evening.

The couple never found a consistent line, and the expulsion of Marit Rønsberg Jacobsen in the first half was highly debatable, at the very least.

Norway can start preparing for what will become a very attractive match against Romania, on Wednesday.

The Romanians already made it to the main round but will certainly not relax against a Norwegian team that still has to get there.

The Czechs, on the other side, find themselves in a “must-win” situation as well, in their last match against Germany if they are to keep their main round hopes alive.