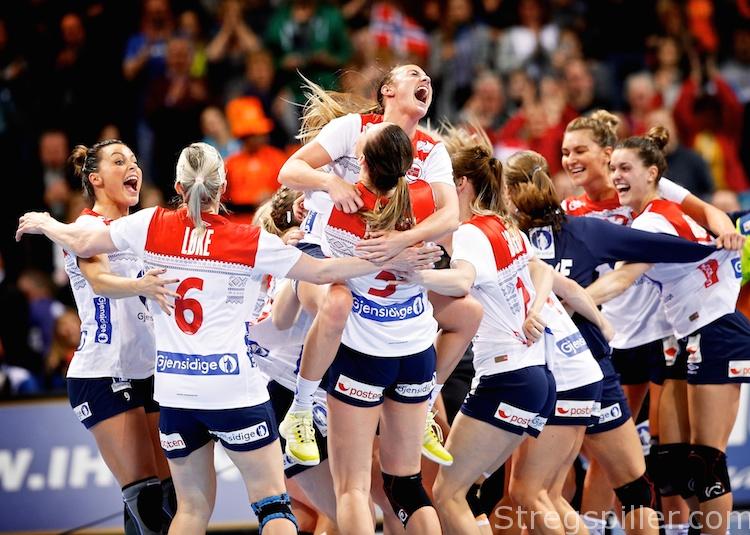 Norway – in a league of their own

The semi-final day in Hamburg turned another demonstration of Norway´s superiority in women´s national team handball.  The Netherlands were no match for Norway who decided the game within the first 12 minutes.

In the other semi-final, a questionable call by the referees, towards the end of the match, led to Sweden’s fall against France.

Just two days earlier, Norway had run over Russia 34:17 in their quarterfinal game at World Cup’17 – it was a show, rarely seen in the history of women´s handball.

Virtually any expert saw the Norwegians as the odds on favorite, not only to win the semi-final, but also to defend their title.

Nobody has to look past Norway – to no surprise this was the lesson of the first semi-final at Barclay Card Arena in Hamburg.

The match was more or less decided by 12th minute, as Norway were leading 8:1 and the rest of the game was one drawn out Norwegian handball clinic.

When Norway play next to perfect handball, there is no team on this planet that can get even close to challenging them.  As they came woefully close to perfection in the first half of the match – the Netherlands did not stand a chance.

And as a spectator you could only lean back and enjoy Norway’s game.  Even at a breathtaking pace, Norway executed some of the most complicated and refined combinations.

Within 12 minutes, Norway went up 8:1, at which point Helle Thomsen called her second timeout already.

Just as the first interruption, at 1:5 after eight minutes, it did not help much against a spectacular amazing Norwegian team. The Scandinavians continued pulling away via 10:2 and maintained a seven to eight- goal ahead for the rest of the first half.

Considering the difference in performance during the first half, it was more than hard to see how The Netherlands would come back into the game. As a matter of fact, they did not.

Norway did not maintain the torrid pace of the first half, as coach Thorir Hergeirsson used his bench more frequently.

It was more than enough to stay clear of the opponent and they even increased the lead even further.

One notable observation – Hergeirsson does not seem to have much confidence in his other left backs, Emilie Hegh Arntzen, Emilie Christensen and Hilde Fauske.

Only with less than 13 minutes left on the game clock, Hegh Arntzen was sent on, and she had the honors of providing Norway their first 10-goal lead, as she scored her one and only goal at 30:20.

Nora Mørk was officially awarded Player of the Match, and she certainly played well, but in my opinion, Stine Oftedal was once again the superb leader of the Norwegian attack, guiding her team to victory.

Some empty seats could be spotted in what was officially announced as a sold-out Barclaycard Arena. But the 11,261 spectators, who did attend, certainly created a fine atmosphere, with the Norwegian fans more or less dominating the rest of the crowd.

Norway can prepare for Sunday’s final against France with confidence and optimism. It is extremely hard to see how France – or any other team for that matter – can cause Norway any trouble at the last stage of the competition.

The Netherlands and Sweden will have to collect themselves and fight for the bronze medal.

The two teams had at least one thing in common.

Both opened their World Championship campaigns with a surprising defeat – Sweden against Poland and France against Slovenia.

Since then both sides had improved considerably, Sweden in particular. In their match against Slovenia (33:21) in the Round of Last 16 and in their quarter-final against Denmark (26:23) the Swedes showed impressive performances.

France may not have reached the levels as in previous tournaments but in their Round of Last 16 against Hungary (29:26) in their quarterfinal against Montenegro (25:22), Olivier Krumbholz´s team did what they had to. “Les Bleus” are ready for their third championship semi-final in a row.

France is not known for being involved in high-scoring matches, and this semi-final certainly did not serve as an exception.

Unfortunately, a questionable call by the two Spanish referees played a deciding role in a close match.

Although, the match was not played at the same frantic pace as the previous semi-final, it did not take away an entertaining handball game.

France had the better start and went ahead 8:5 and 10:6. And even though Sweden’s coach, Henrik Signell, brought Hanna Blomstrand as right back – just like in the semi-final against Denmark – she did not have the same impact this time around.

Still, Sweden came back into the game before half time, and after scoring six goals in a row; the Scandinavians changed a 6:10 deficit into a 12:10 lead.

Nathalie Hagman, who had moved from right back to right wing, after Blomstrand came on, scored the 10:10 equalizer four minutes before the break.

It was also Hagman who gave Sweden their lead making it 11:10 a minute later, a one-goal advantage that Sweden maintained until the break.

The two teams took turns taking the initiative in the 30 minutes that remained in this World Cup semifinal.

When France got up 19:15 between the 41st and the 45th minute, the game appeared to be decided, but it took Sweden only six minutes to even the score at 19:19.

The rest of the match became a thriller with the two teams taking turns, trading one-goal leads– until the Spanish referees Ignacio Garcia and Andreu Marin made the aforementioned debatable call.

At the score of 23:22 for France, they wrongly awarded an attacker´s fault against Sweden, and Blandine Dancette decided the affair, making it 24:22 from her right wing position.

The Player of the Match does not necessarily have to come from the winning team.

With her eight goals, several of them scored at crucial points in the game, Hagman was the outstanding player of this World Cup semifinal.

Actually, the two Spaniards, Garcia and Marin did a good job, but unfortunately the erroneous call towards the end became the match-deciding event.

Can France stop Norway´s amazing offense in the World Cup final? And which one of the defeated teams will regain their composure quickest and secure the bronze medal? Answers forthcoming on Sunday, December 17, 2017.