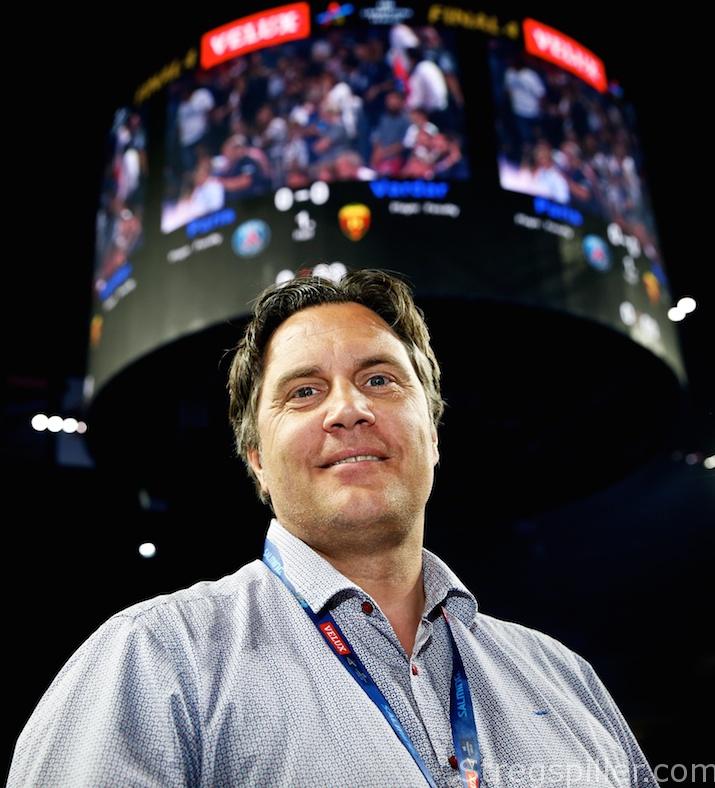 INTERVIEW – Frode Scheie used to be the shot-stopper of Norway’s national handball team, but these days he is the voice of handball for TV channel Viasat. I talked to the former goalkeeper about the upcoming World championship in Denmark and Germany and what’s in store for the team of coach Christian Berge.

How much are you looking forward to the tournament as it’s played in possibly the two biggest handball nations in the world?

FS: I’m very much looking forward to it – I think it will be a fantastic event. I once said: “Let’s have all the women’s tournaments in Denmark and all the men’s competitions in Germany.” Now, we have one tournament split between both countries – that’s just awesome.

What are your expectations?

FS: My expectations are very high because we have three, very good teams in Scandinavia, right now. Two of them will reach the semi-finals and two of them are likely to win medals. I am also curious to see what Germany can do. In 2007 they were not among the favorites, but they won the Gold medal, plus they’ll have the support of the fans.

Let’s talk about Team Norway. The women’s team has been dominating the scene over the past 15 years and they just finished 5th at the 2018 European championship. Does this put more pressure on the men’s side?

FS: The players themselves said that they want to win the Gold medal, but I think expectations depend on what you base them on. Last year, in Croatia, the team didn’t do too well.  And, this time with regards to current injuries all key players are basically ready, like O’Sullivan or Johannessen, Myrhol and Bjørnsen as well. It’s just Kent Robin Tønnesen who will be out, but considering the current form of Harald Reinkind, I don’t know if that’s a problem.

You say Reinkind will be able to replace Tønnesen, but he and Magnus Rød are different kind of players. How much will the team miss the 1-on-1 abilities of Tønnesen?

FS: Well, that’s tough question. For sure, Tønnesen is a player Berge can rely on and even on a bad day he can score five goals. In Veszprem, he has had a solid season thus far, although the team didn’t play well for most of the time. Reinkind, on the other hand,  had a rough start in Kiel, but once he got used to a different system, he played realy well, especially in those two matches against Rhein Neckar Löwen. Reinkind has a good eye and this helps his wing players. Whereas, Rød has taken the role of defender.  but, he is very good at running fast-breaks – he is tall and can shoot as well.

Norway has developed quite well over the course of the last three or four years. Has the team reached a peak?  From the outside it looks like there is a perfect mix between young and veteran players.

FS: Yes, it’s a great combination. Norway is ready. When you look at the squads from the other group, like Sweden, Hungary and Qatar, it’s almost set up for Norway to advance to the semis and I think they will. Today, men’s handball is different compared to the past, when teams like Poland, Russia or Romania (back in the day) were extremely strong. Germany is not what it used to be as they miss some good players in the back-court. So, it’s the perfect time for teams like Norway to sneak in and one day they will win the title. Maybe not this time, but maybe next year.

What is the biggest strength of this team?

FS:  I think all the players know each other perfectly well and that’s a huge advantage. They are playing together since the days of Robert Hedin (former head coach of Norway ed.). Yes, there are some newcomers, but they have played the same system all along. They were able to reach the final four and they made it to a final game as well. Now, they know how it feels to play a whole tournament. Almost all the players are on the same level, but more recently some other good teams like Germany or Spain won the titles. Sagosen is our big star and for me he is the single best player in this tournament. That’s a strength as well, as opponents will have to focus on him and that will create space for the other players. In addition, the team has great speed – they can run.

What do do you have to do if you want to beat Norway?

FS: You have to run, run, run and match Norway’s speed. And, you have to be patient to avoid easy mistakes. Obviously, you have to take care of Mister Sagosen as well.

Who is your favorite to win the tournament or will we experience a big upset?

FS:  Norway, Denmark and Sweden are the three contenders from the groups that play in Denmark that will make it to the semi-finals. From the groups that compete in Germany, I see Spain as the best team. They are my favorites. France without Karabatic will be interesting to watch, but they may have a problem in goal, as neither Gerard nor Dumoulin have shown the form of the previous season. Germany has to be the surprise package in the competition. I don’t think last year’s problems surrounding the coaching position are all gone. I’m not convinced that they will be able to deal with all their issues.

And who, except Sander Sagosen, can become the star of the tournament?

FS: Usually it’s a player who is on a winning team. Alex Dujshebaev will have a decent shot, I think. Finally, he is the leader of his team, unlike in the past. He is very close to become a true world-class player. So, I go for Dujshebaev.