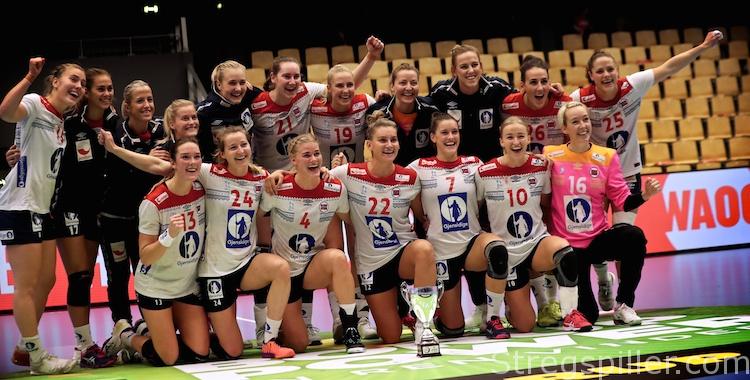 ANALYSIS – Norway lived up to the expectations and won the Golden League, defeating the Danish hosts on the last match day.

The last round of play in Horsens also showed a Polish squad that’s progressing nicely and a French team who’s longing for their injured key players to get fit.

What a weekend it turned out to be for Poland.

After beating Denmark 23:21 on Saturday, Poland went on and defeated the French World champions by no less than six goals.

Keeping France down to 16 goals is an achievement in itself for any defense formation. But from day 1 of the tournament, Poland’s 6-0 formation got better and better, and so did their goalkeepers, Adrianna Placzek, who was in charge during the first half, and Weronika Kordowiecka.

It was not only in defense where Poland impressed.

They continued their fine development from the match against Denmark, and even though they tried to take the pace out of the game they did show a number of creative moves when in attack.

French coach, Olivier Krumbholz kept searching for solutions, but although he dug deep into his toolbox, he never managed to find the right key against a clever Polish team. Not even a 5-1 defense formation did the trick.

Once again, France’s offense worked best with Tamara Horacek as playmaker, while on the other end of the court, the team’s work of the day was OK, but not quite as imposing as we have grown accustomed to.

France finishing last in any tournament without a single win is not a common event.

It turned out as it usually does, when Norway and Denmark meet.

The Danes were able to follow their opponents for quite some time, but Norway were in control and in the second half, things could have become ugly for the hosts, had it not been for a fine performance of Sandra Toft in goal.

Once again it became apparent that Norway’s offense works best, when Stine Oftedal and Veronica Kristiansen are on the court at the same time.

But head coach Hergeirsson also tried Marta Tomac as playmaker for some shorter spells.  Unfortunately, the Kristiansand player still has some way to go before she will reach her top form.

And on left back, Hergeirsson continues to look for an alternative to Veronica Kristiansen.

Ingvilde Bakkerud provided a glimpse that she may be an option in the future, but it will take time before the coaching team can fully rely on the Odense player for extended minutes on the court.

One thing is certain – Norway is very well equipped in goal.

In the first half, Silje Solberg showed her best performance during the Golden League, and when Katrine Lunde replaced her after the break, the veteran displayed her usual high level.

Stine Jørgensen did what she could in central offense as well as on the left back position, while Stine Bodholt increasingly looks like Klavs Bruun´s best option on the line. Three goals against a strong Norwegian defense support her case.

Considering all, Denmark’s defense did okay, keeping Norway to 25 goals, but when in attack, the Danes struggled most of the time, unable to pose a consistent threat.