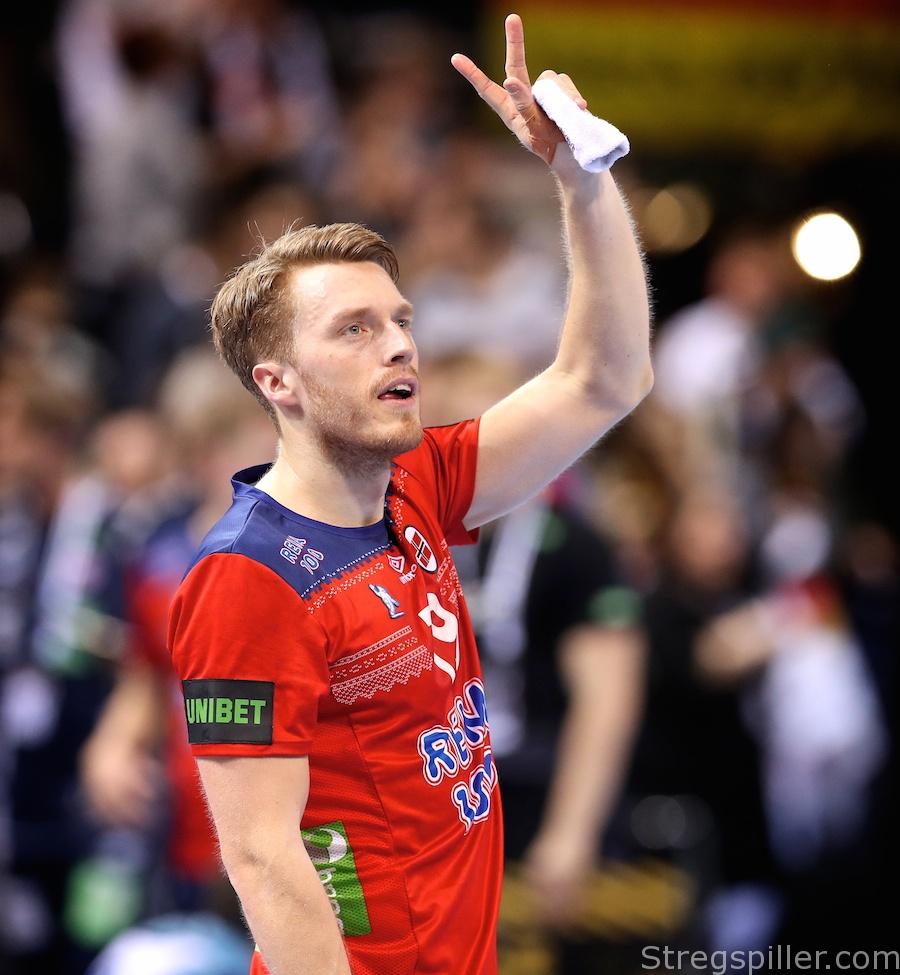 MATCH REVIEW – With a win which was closer than the score suggests, Norway eliminated Germany in the second semi-final in Hamburg and set up the first all-Scandinavian Men’s World Championship final in history.

Together with Denmark, Germany were the only undefeated team in the tournament, having won six games and drawn twice.

The Germans had the obvious advantage of playing at home all the way and retained that advantage in this semi-final in Hamburg. With German flags placed on all 12,500 seats, everything was in place for a German party.

The match looked to be a battle between the German’s physical defence and Norway’s speed and fast breaks.

This seemed to become a particularly interesting match-up, as Germany had not yet met an opponent like the speedy Norwegians.

The six-goal difference at the end does not reflect the exact difference between the two teams, but Norway were the better team over the 60 minutes.

When they finally got their game really going, they were that bit better than the Germans all the way, which was also reflected in the fact that the Scandinavians were two or three goals ahead during the last 35 minutes, before doubling their lead in the final two minutes, as Germany appeared to give up.

Above everyone else, it was Sander Sagosen and Bjarte Myrhol who won the match for Norway. Not only did they score six goals each, but the cooperation between Sagosen in the backcourt line and Myrhol on the line was exemplary.

Neither team were really able to get a grip of the game and consequently took turns at being a goal or two up during the first 25 minutes.

However, as Germany received a pair of two-minute suspensions in quick succession, Norway managed to take the first and only three-goal lead of the first half at 13:10.

Uwe Gensheimer could easily have got a red card for an assault on Sander Sagosen, but the German left wing got off with two minutes, and soon after, it was Norway´s turn to be shorthanded, allowing Germany to pull it back to a one-goal deficit. The first half ended in a rather nasty atmosphere between the two teams and with a two-goal lead for the Norwegians.

The match continued to be physical, but still with Norway in the driver’s seat, never fewer than two goals up.

It helped the German attack, when Fabian Böhm came on at left back, but it was never enough to bring the hosts back into the game for good.

Gradually, the fast Norwegian play became too much for Germany and it definitely did not help their defence when Henrik Pekeler got his third two-minute suspension halfway through the second period.

Norway went four goals up at 26:22 and although Germany closed the gap to two once again, they could not take the final step in the comeback.

As Sander Sagosen made it 28:25 with just over two minutes, it was all over. Norway then managed to score three more goals without reply, leading to a final score which flattered the winners.

The atmosphere in the stands was great and the home crowd did their best to spur their heroes on. It was just not enough this time.

“It was a physical game, but also a good game, I think. We wanted to run a lot with the Germans, but we did not have that much success with that tactic in the first half. It worked out much better in the second half, and I think we played a good game in general.

“Now, we must focus on doing better against Denmark than we did in our first meeting with them.”

“We did not manage to play the way we have done so far in this tournament and I am obviously very disappointed right now.

“I have a really empty feeling, but we will have to pull ourselves together again soon as we want to win that bronze.”

Before that, Germany will meet France in the bronze medal match.