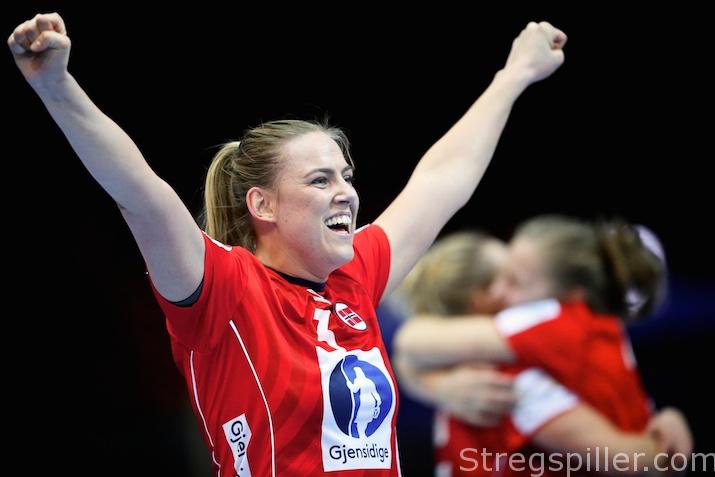 For the second time within the past twelve months, Norway and the Netherlands meet in a major championship final.

Norway clearly won at the World Championship in 2015, but now the Dutch get a chance for revenge.

Norway needed some more time to secure victory in their game against France, but in the end, coach Hergeirsson’s crew earned a four-goal win as well, 20:16.

How would the small -relatively speaking – Norwegian backcourt cope with a physically strong and well-organized French defense, which many experts had characterized as the best in the world?

Ahead of the game, it was widely expected that the match would be determined at the other end of the pitch, in a battle between the two defense formations.

If Norway could withstand the French attack, which Olivier Krumbholz characterized as “having improved during the tournament”, Stine Oftedal & Co. would come out on top.  If not, a French triumph was within reach.

In a tough and physical match, that was equal most of the time, Norway wore down France in the end.  Spectacular saves by Silje Solberg in particular, as the game entered crunch time, guaranteed another final appearance of the Norwegian serial winner.

France was encountering surprisingly few problems scoring goals at the beginning, giving them a three-goal leads at 6:3 and 7:4.

But soon, Silje Solberg would start her one-woman show in Norway’s goal.  For the 13 minutes, she and in improving Norwegian defense, would not allow another single goal.  After being down 4:7, Norway went up 11:7, before France finally found the back of the net again, scoring the last two goals before the break.

Solberg finished the first 30 minutes with an impressive saving percentage of no less than 63.

It did not take France long to come back and equalize the score at 11:11, and in the minutes that followed, the French seemed to be in control.

Olivier Krumbholz´ team took out the pace and began playing the game on their conditions.  However, they had ongoing problems with Solberg and the defense formation in front of her.  And after taking back the lead at 15:14 and 16:15 just past the middle of the half, the French players seemed to be running out of steam, even so head coach Olivier Krumbholz made more use his bench.

Manon Houette´s goal advancing France (16:15) with a bit more than seven minutes to play, turned out to be the last French score in this semi-final.  Five unanswered goals by Norway swept aside all doubt of who the other finalist at EURO 2016 would be.

While, Silje Solberg´s saving percentage dropped from 63 to 59, as the second half went on, she still put on a performance that was out of this world.

Even though Marit Malm Frafjord played a very important role on both ends of the court, scoring four goals at critical times, the award went to Solberg, and rightly so.

Veronica Kristiansen, left-back, Norway, on meeting the Netherlands in the final:

“I am going to meet the coach who was my club coach in FC Midtjylland until recently, Helle Thomsen, and that will be very exciting!”

Just like at the previous semi-final, thousands of Norwegian supporters created a fantastic atmosphere in Gothenburg’s Scandinavium arena.

It will be interesting to see, if Norway´s enormous physical pressure at both ends of the court and an offense that operates at lightning speed will be enough to earn them another gold medal in a final against the Netherlands?

The Dutch team appears to be stronger and more stable than they were a year ago, and we should have every right to expect a closer and more interesting final compared to the one in Herning, twelve months ago.