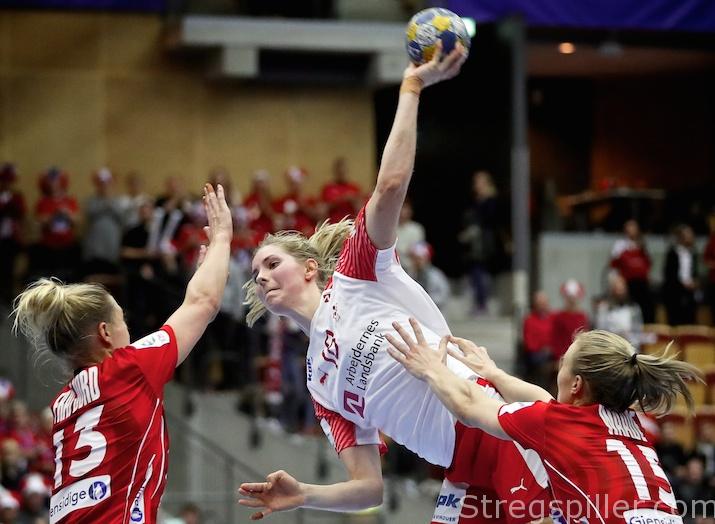 Norway and Romania ready for semi-finals?

Norway and Romania look to be the two semi-finalists from Main Round Group 1.

That is the conclusion after the games on Sunday, where Romania delivered a solid performance, as a depleted Hungarian squad was beaten 29:21.

Norway were not at their best in the Scandinavian derby against Denmark, but they still managed to stay undefeated through a narrow 22:20 win, while Russia were lucky to defeat the Czech Republic 26:24.

The Czechs had played surprisingly well in their preliminary group in Malmö, where they had not only reached the main round, but took two points with them as well

Russia, who started with zero points, was a bit of an unknown factor, having only been able to beat Croatia en route to the elimination round of EURO 2016.

Despite being in the lead almost all the way, Russia were never able to shake off the Czechs who did have a chance to even the score in the last minute of the game.

It was hard to comprehend that this was the same Russian team that won Olympic Gold in Rio, back in August, in brilliant style. While some players were missing, the core of the squad stayed intact.

Evegeni Trefilov made his usual fast and frequent substitutions, which included his talented playmaker, Karina Sabirova, but she found herself playing on the left wing.

However, it seemed that no matter what players Trefilov sent on the pitch, it was enough to keep the Czechs on a three-goal distance for most of the time.

The Czechs were able to follow the Russians closely until 5:5, and from then on, Postnova & Co. were leading in a mediocre first half of handball, constantly by two to three goals.

Finally, eight minutes after the break, Trefilov had moved Sabirova in her favorite position as playmaker – but neither that nor Trefilov´s constantly changing defense formations were enough to fight off the Czechs.

Not even when Russia went up by five goals (22:17), were they able to decide the matter.

Petra Adamkova had cut the deficit to 25:24 with barely two minutes left on the game clock, and Petra Kudlackov saved a penalty from Anna Sen.  All of a sudden the match was on the line.

However, the Czechs did not manage to make use of their opportunity to score the equalizer, and in the dying seconds, Ksenia Makeeva put the game away for good.

Both teams still have a theoretical chance to reach the semi-final, but for both, it will require victories in the remaining two matches, while relying on the help from the some of the other teams.  Right now, neither team looks like a potential semi-finalist.

However, it can only be a matter of time before a more prominent club other than HK Kristianstad snaps up Lucie Satrapova.  The 27-year-old Czech goalkeeper showed an outstanding performance.

Considering their long injury list, it was sort of a miracle that Hungary had qualified for the main round at all, while Romania’s achievement was directly related to the outstanding Cristina Neagu – as always.

Hungary´s coach Kim Rasmussen had replaced his heroine from the deciding group match against Montenegro – goalkeeper Kinga Janurik – with Melinda Szikora.  Considering Janurik´s stellar performance only two days ago, this change was not easy to understand.

A repeat of the duel between the two coaches – Ambros Martin vs. Kim Rasmussen – of this years epic Champion’s League Final, in Budapest added more spice to the game.  But this time Martin had the better end for himself.

Hungary was not strong enough to pose any kind of threat to the Romanian’s and Anita Görbicz is not the same player she used to be.  On the other side Cristina Neagu still is.

Negau was the main reason for Romania´s convincing victory in a match that Romania dominated on the pitch as well as in the stands.

The key question to any defense playing against Romania is how to contain Cristina Neagu – or more correctly – trying to limit her score.

Hungary moved their right-back forward, trying to cover her as closely as possible. They might as well have placed a chair in front of her. Neagu scored as she pleased, actually I was surprised when I checked the half time statistics and noticed that she had “only” scored seven goals. It seemed like a whole lot more.

Romania’s sharp shooter had almost scored as much as the entire Hungarian team in the first 30 minutes.

Kim Rasmussen´s team only managed to follow the Romanian side for the first four minutes.  From 3:3 onwards, Romania continued to build their lead consistently throughout the first half.

Hungary tried man-to-man defense on Neagu, but her teammates always found ways to bring her back into the game

With seven minutes left, Neagu called it a day, with 10 goals on the scoreboard. The second half turned into one long question: How big was Romania’s victory going to be? In, the end, it was eight goals.

Hungary lost a last theoretical opportunity to reach the semi-final.  Romania, on the other hand, showed once more that they are a serious candidate that wants be amongst the final four teams of the competition.  Yes, they do depend a lot on Neagu, but they seem to live with it just fine.  Their opponents will not.

Both teams came into the main round with a maximum of four points, having won their respective groups without any problems.

Norway’s “jenter” were the favorites, as they have been every time when the two teams met in recent years.

At first sight, the match appeared to become a battle between two very strong defense formations.  Yet, another question was if Denmark were able to resist Norway´s extreme pace.

If the Danes had been mentally present from the start, the match could have had a different outcome.

However, the Danish team got down 6:0 before they began to play handball. And if you keep trailing for 60 minutes it’s impossible to win.

It was not only a question of Norway being better than Denmark, but by how much?

Beginning with throw-off, the Danes appeared paralyzed – certainly when in attack.  Poor shot selection, wrong decisions and technical mistakes were prohibiting a better result, while Norway seemed capable of anything.

When Nora Mørk scored with her right hand, making it 6:0, Denmarjk was on the verge of falling apart early on.

But after Stine Jørgensen had recorded Denmark´s first goal in the 9th minute, they managed to cut the deficit quickly (6:5).

However, once coach Thorir Hergeirsson replaced Stine Bredal Oftedal with Marta Tomac as playmaker, Norway’s offense was clicking on all cylinders again. At the half his squad was leading by five goals.

Denmark´s coach Klavs Bruun Jørgensen had ordered his defense to step back – a successful tactical adjustment.  It also helped Sandra Toft to improve her efforts in goal, and upfront, Lotte Grigel added fresh pace in Denmark’s attack.  The 25-year-old playmaker from Rostov-Don did not have a good start to the tournament, but this time she proved her worth to the Danish side.

All of a sudden Norway had lost their rhythm yet, they were still smarter and more experienced than their opponent, especially in critical situations.

The Danes reduced the deficit to one goal several times and towards the end, on one occasion, they even had the chance to score the equalizer, but it did not work out.

Norway took a big step towards the semi-final leading the group with six points.

Romania and Denmark follow (4 points), with Russia and the Czech Republic behind (two points). Hungary lost their opportunity to advance any further in the competition.

After tonight, Norway seems to be unstoppable en route to yet another semi-final, while Romania and Denmark will fight for the other spot.