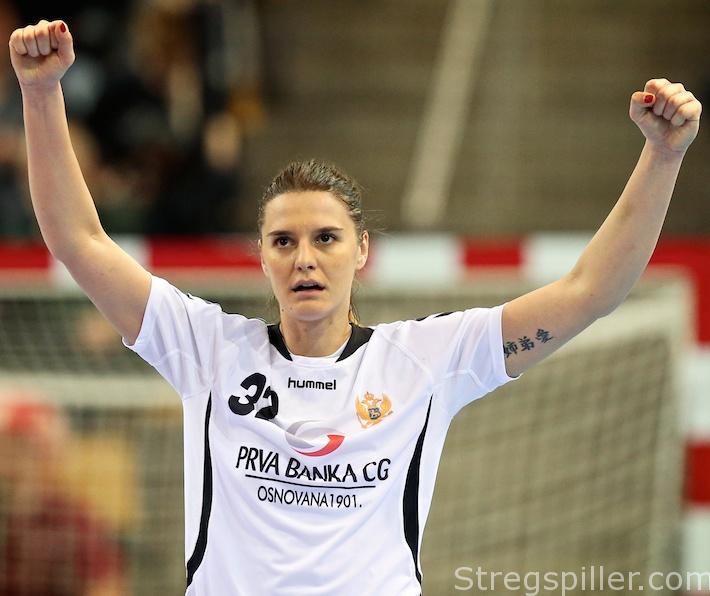 “I do not count my goals”

INTERVIEW – Having scored 14 goals, Katarina Bulatovic played a crucial part in Buducnost´s stunning 31:28 win, on the road, against Vardar on Sunday.

The loss was not only Vardar´s first defeat in their current Champions League campaign, it also marked Buducnost´s comeback after a series of poor performances.

For Katarina Bulatovic, scoring 14 goals was really no big deal, as she tells in this exclusive interview with stregspiller.com.

“I simply tried to do my best, as I always do, and this time I was successful,” says Bulatovic when asked to explain her 14 goals on 19 attempts.

“Normally, I do not count my goals, and I certainly did not do it this time.

“I just fired away, when I had the chance, and it was not until after the game that I realized, I had scored 14 goals!” explains Bulatovic who is currently ranked third in the Champions League top scorer list with 62 goals.

“A very important reason for my personal success was the fact that the whole team played well.

“We were determined to show that we can still play good handball, and there was no better place to show this than in Skopje and no better opponent to show it against than Vardar!” she says.

All time low made us take action

Buducnost´s surprising win came just a fortnight after what looked like the team´s all-time low.

On home ground, at Moraca Hall, the pride of Montenegrin handball was humiliated by Ferecencvaros Budapest.  The Hungarian’s won the encounter 33:25 after leading by 11 goals along the way.

“We have played a couple of pretty bad games, and that match against Ferencvaros was, of course, the worst.

“It made us take action.

“We simply agreed that it can’t be true that we can do better, and that this (performance ed.) was not okay towards our fantastic fans.

“We agreed to show the world that Buducnost can still play handball.

“That’s what we did in Skopje – I am proud of it and proud of having contributed 14 goals of my own.

“I cannot promise that I am going to score just as many next time, but we have other great players who can decide matches for us,” says Katarina Bulatovic.

The win in Macedonia did not advance Buducnost in the league table, where they still find themselves in third position.

However, they reduced the distance to Vardar and Ferencvaros  to three points.  The Hungarian club now shares the lead in the group with the Macedonians.

“It is hard to say how the ranking in this group will look like in the end, but all I can say is that we will do everything to continue what we started in Skopje and show that we are back on track, now.

“We will do that for the rest of the main round and also in the quarter-final,” promises Bulatovic who has won the Champions League four times already – in 2007 with Danish Slagelse, in 2012 and 2015 with her current club, Buducnost, and in between with Gyor in 2014.

“Of course, I am dreaming of making it a fifth time, but I cannot promise that it will happen this year.

“There are so many good teams, but what I can promise is that we will keep fighting as long as we are in the competition.

“We want to show our fans and the rest of the world that we can still play excellent handball and that we will continue to do so!” she says.

Yearning for revenge against Ferencvaros

While she is a bit reluctant to speak about her team´s chances further down the road, there is one match in particular, she does not mind talking about – the return match against Ferencvaros.

This upcoming weekend, Astrakhanochka are visiting  Moraca Hall, and despite the Russian champions recent 26:24 win at home against Thuringer HC – their first points in the main round – they should not pose a threat to Buducnost.

Once this game is behind, the away match against Ferencvaros awaits.  On March 11, Katarina Bulatovic and her teammates will be travelling to Budapest for their last main round fight and the hunger for revenge after the devastating defeat a couple of weeks ago is obviously big.

“We will probably never forget what happened to us in that home game against Ferencvaros, and I can assure you that we are really keen on avenging that defeat, when we meet Ferencvaros again.

“We will do everything to get rid of this stain!” she promises.

What Buducnost can achieve this season is one thing.  The future of the squad and the club is a whole different story.

Cristina Neagu leaving for CSM Bucuresti is already a fact, while line player Dragana Cvijic will be joining Vardar for the 2017/18 season.

Katarina Bulatovic does not know if she will stay on or if she will also leave the club, where she is currently playing her seventh season in total.  She represented Buducnost from 2008 to 2012, and her present stay began in 2014.

“My contract is expiring at the end of this season, and that is all I know at the moment.

“I do not know what is going to happen next, and frankly, I have not given it much thought yet.

“There will always be clubs who want good players, so I am not too worried about my future.

“I do not know what will happen in Buducnost or how many of the current players will be staying, but I am sure that somehow they will manage to build a strong team for the future,” says the 32-year-old right-back, indicating that she may not be a part of the squad after the summer break.

Sad of not being part of the national team anymore

Despite her indisputable qualities and her experience, she is no longer part of the Montenegrin national team.

Dragan Adzic – who is also head coach in Buducnost – has no place for her in the new team that he is forming for the 2020 Tokyo Olympics.

“The coach and the federation have decided to build a new national team with younger players.

“This means that for me there will be no more opportunities to represent Montenegro.

“It makes me sad, but that is life, and of course, it means that I can focus so much more on my career at the club level.

“I am sure that I still have some good years in me!” says Katarina Bulatovic.