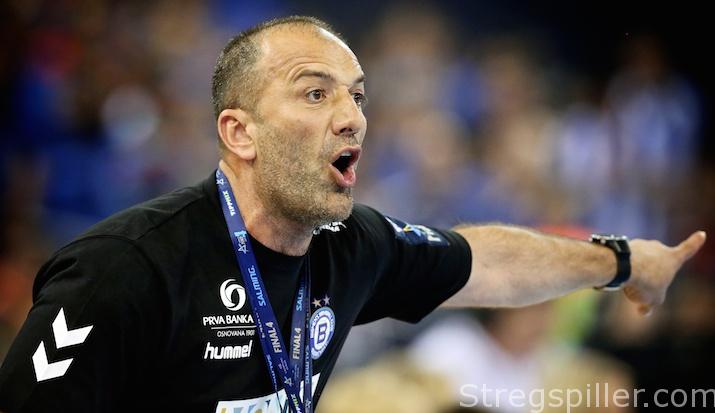 “I would not even think of leaving Buducnost”

INTERVIEW – After 18 successful years in charge of Buducnost, head coach Dragan Adzic lost a number of stars prior to the beginning of the  2017/18 season and decided to start from scratch.  Yet, the thought of working elsewhere never crossed his mind.

For him it’s still a privilege to coach the pride of Montenegrin handball, as he reveals in this exclusive interview with stregspiller.com.

After 18 years in the same job, some people might be looking for new challenges – not Dragan Adzic.

During this time in charge of Buducnost and Montenegro’s women´s national team, he has been one of the most successful coaches in women´s handball, worldwide.

Two Champions League victories with Buducnost – the club has been present at all four Champions League FINAL4´s so far – European champions with Montenegro in 2012, only four months after winning an Olympic silver medal in London, are just a few of his accomplishments that stand out.

These days, life is a bit different for the 50-year-old coach, however.  He is building new teams on the club- as well as on the national level.

Buducnost has seen a number of key players leaving the club – Cristina Neagu, Katarina Bulatovic, Dragan Cvijic, just to mention a few of the most prominent stars, are no longer in the Montenegrin capital.

To a coach, who has been used to success as much as Adzic, such a situation might translate into a strong motivation to look for a job elsewhere. But Adzic still feels privileged.

“To me, it has been a privilege being able to work in my country and in my city and at the same time being able to achieve top results with one of the best clubs in Europe.

“I am very grateful having the opportunity to create new quality from this great base of talent that we have here.

“I am fully committed and happy to have a staff consisting of experts around me.

“And I do not even have time to think about working at other clubs or countries or in different environments,” says Dragan Adzic.

I enjoy seeing my players grow

Even though he will probably have to wait a while for a new triumph with Buducnost as well as with the national team, he makes no secret that he enjoys his current role as a “team builder”.

The fact that he stepped down as national coach after the Rio Olympics last year, but was persuaded to continue in his job, is old news, and these days, he is 100% motivated, when it comes to re-building the national squad as well as the team of Buducnost.

“I feel the need to give myself completely to the future development of women´s handball in Montenegro, as long as there is interest from so many wonderful people who want the best for handball in our country and in my city.

“During my entire coaching career, one of the things I have enjoyed most has been working with young players.  So, now I enjoy every day when I work with these young, promising athletes, who will be the future of Montenegrin handball.

“I enjoy seeing their potential, their development and seeing them grow,” he says.

He is, of course, realistic about Buducnost at the current level.

“In comparison to last season, there are no top seven players in our team anymore.

“Right now, I am aiming for our young players to take responsibility.  That’s a step on the road of creating the quality we have been known for in this club for so many years.

“It is hard to compare the current generation to the one of the past, but I like to tell my young players that the sky is the limit.”

“Being able to produce and develop new talents – something we have been known for in the past – is our only way to survive in top handball.

“I actually believe we can create an even stronger team than before, considering the many talents this club produces.  But it is not entirely up to me.  It demands continuous and dedicated work from all people in the club.”

Buducnost and Montenegro peaking at the same time

Being realistic about Buducnost’s current state of affairs obviously means that Dragan Adzic is just as aware about the club’s prospects in the upcoming Champions League campaign.

Metz, Bietigheim and – most likely – Vipers Kristiansand will be the opponents in the group phase of the competition, while teams like Vardar and Ferencvaros will await in the main round, should Buducnost make it that far.

“Given that we will be the youngest team in the entire Champions League, we will be facing some serious challenges against clubs who have much more experienced players than us, obviously.

“However, I hope that the energy, that our young players possess, can take us far.  We need as many Champions League matches as we can possibly get – it is the experience of these games that will let our young team grow rapidly,” says Dragan Adzic who – understandably – is reluctant to set a specific success criteria for Buducnost in the 2017/18 Champions League season.

“To me, success will be the continuous growth of this young team and the experience we gain in the matches that we get to play in the Champions League.

“This experience is what we need for upcoming seasons, where I hope we can build a team just as strong as the previous generation,” he says.

With regards to the national team, he and the Montenegrin federation are planning for the squad to peak at the 2020 Tokyo Olympics.  It is the hope and objective that Buducnost and the national team will reach former glory at the same time, at the latest.

“There is no doubt in my mind that you will see Buducnost in the FINAL4 of the Champions League again some day.

“Maybe we will have a clearer picture already at the end of this season, but I do hope that we will be in the FINAL4 before the end of this Olympic cycle,” says Dragan Adzic.