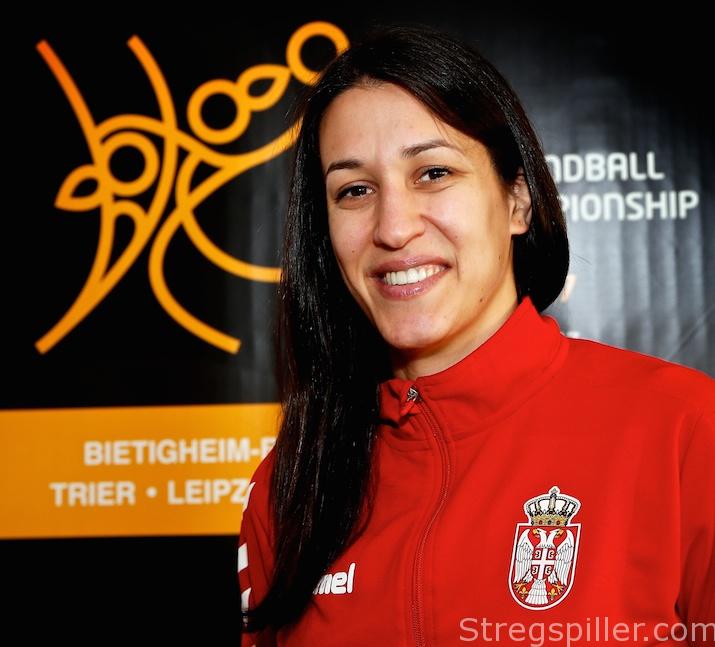 “I would not be here if I were not fit”

INTERVIEW – Andrea Lekic confirms that she is completely fit after her shoulder injury, which threatened her participation at the 2017 World Championship until the very last moment.

Despite the return of several star players in the Serbian team, she is still a bit reluctant to speak about objectives.

Finally, Andrea Lekic is back for Serbia.  The shoulder injury which kept her away from the national team as well as her club, Vardar Skopje, does not bother her at all anymore.

She was rested for the first two matches against China, a circumstance that caused Serbia no trouble at all.  Against Germany, she played for 11 minutes, and she got plenty of court time against The Netherlands.

“Considering that I did not play handball for a month and a half ahead of the tournament, I am happy about how much I have been able to contribute already.

“My physical shape is very good; the shoulder is reacting as it should, which makes me happy.

“I feel no pain in the shoulder after Wednesday’s match, and this shows me that I can continue pushing myself,” she says.

But what exactly was wrong with her shoulder?

“I had a problem with the “labrum” (link between arm and shoulder, ed.) but fortunately, I avoided surgery.  Instead, I have done plenty of exercises for a month and a half, and now I feel that my shoulder is even stronger than it was before.

“I received the green light from the doctors and from the athletics coach – so I am completely ready to meet the pressure.

“The shoulder feels well and I am totally fit – I am prepared to meet the challenges of the World Championship,” she says.

“I would not be here if I was not sure that I was completely fit, in every respect.

“I was tested two or three days before the start of the tournament, and there were no problems; I managed all the tests, so I have no doubts that I can make it.

“The best proof is that after the match against the Netherlands and all the fouls against me and all the shots I took, I feel no pain – really nothing.”

With six points after their first four matches, Serbia are already in the Round of Last 16, and Lekic is happy with her team s performances so far.

“From my perspective, I can only be satisfied.

“We are still undefeated, and considering our results the previous three years, we can only be content with this.

“In general, I think our team is getting better match by match,” she finds.

Great to be back

She is one of several crucial players who recently returned to the Serbian team.

“I think you can see by the smile on my face how happy I am to be back.

“When I put on the jersey of my country, it gives me extra power and energy, at least that’s what I feel.

“I am grateful to the other girls on our team, as they give me so much motivation, support and mental strength.

“Before the tournament, I only had the opportunity to train with them once, but they have really helped me a great deal, and I am so proud of being part of this group,” says the 30-year-old playmaker who is happy to have Dragana Cvijic back in the national team as well.

On  daily basis, the two of them play together in Vardar, and it suits both of them well continuing their cooperation on the national team level.

“I already played with Dragana in Krim Ljubljana, and now we are reunited in Vardar and the national team.

“On the court we do not speak. We simply understand each other;s moves very well, and I do not have to tell her where to go or where to stand.

“Together, we function very well, and I even expect our teamwork to become better match by match,” she expects.

Despite a good Serbian start and the recent reinforcements in the team, she is hedging her bets just how far she an her teammates can make it in Germany.

“This World Championship is full of surprises, and you really can’t make any predictions.

“I do believe we are ready for a good result, but I can probably give you a better answer after the eighth finals.  But, I think our team has the quality of reaching the quarter-finals.