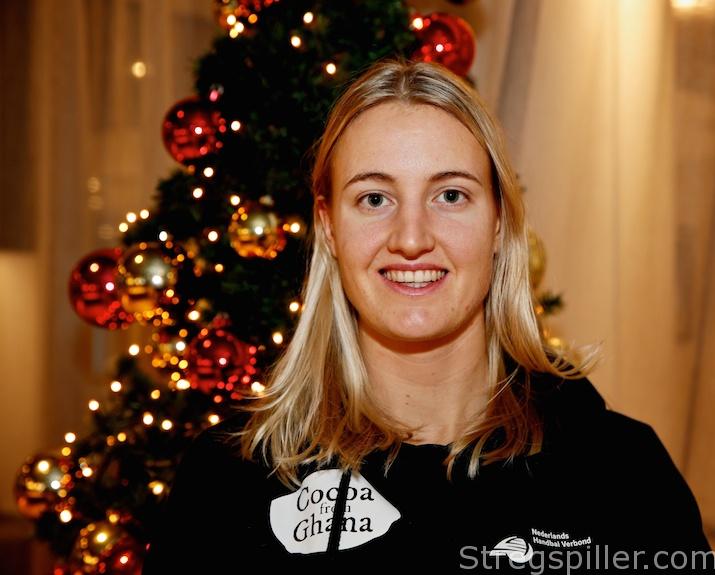 “We haven’t shown the best we can play yet.”

INTERVIEW – Dutch defense specialist, Kelly Dulfer, admits that she is not content with neither her own nor her team´s performance yet – and she confirms that she and her teammates feel the pressure from the inside as much as from the outside world.

“We haven’t shown the best we can play yet.”

Kelly Dulfer is honest when asked about her opinion with regards to the Dutch performance at the 2017 World Championship, so far.

The 23-year-old left back from current Danish league leader, København Håndbold, almost always plays in defense on the national team level, and she is not happy with her and her teammates handball game to date.

“It has not worked out the way we wanted it, and we have yet to find the level where we trust each other. I also think our keepers need to save some more shots than they have done, so far.

“I hope we can already improve against Germany tomorrow – in defense as well as in attack – and that we can show the kind of handball we really stand for and win this game.

“Thereafter, I hope we continue to grow as the tournament progresses,” she says.

“Playing against Germany is always special, and I expect a tough game, where the smartest team and probably the team which puts up the best fight will win.”

Winning against Germany will be critical, from a psychological perspective as well. But she finds it difficult to judge, if finishing first in the group will automatically translate into having an advantage with regards to the next opponent in the Round of Last 16.

“To us, it will be important to win the match, as it will boost our self-confidence.

“With regards to the group that we will be crossing, it is really hard to say what would be best, as the teams in that group (Group C, ed.) keep defeating each other as well.

“The only opponent we would really like to avoid, is Russia. Brazil, Japan, Montenegro and Denmark are all on the same level, I think. It would not matter so much, which one of these teams we meet,” Kelly Dulfer believes.

“Of course, it would be special to play against Denmark, as I play there now. On the other side, the match against Germany is also special, because I have played there for two years as well.

“It is always extraordinary to play against a country, where you live and work,” she adds.

Many of the Dutch pundits have had high expectations in their handball team ahead of this World Championship. Especially, after the Netherlands reached the final at the 2015 World Championship in Denmark as well as the European championship, in Sweden, a year ago.

Kelly Dulfer confirms that the accomplishments of the past have translated into certain pressures that the players are now dealing with.

“We feel the pressure, but there are certainly huge expectations coming from within as well.

“We expect a lot from ourselves, because we have done so well at the previous championships for several years now. And that makes it even harder accepting that things are not coming as easy to us this time around.

“I can only hope it will happen, eventually,” she smiles.

Change has meant a lot

Before this season, her personal handball life changed, when she left Bundesliga club, VfL Oldenburg, to play for ambitious København Håndbold in the Danish league.

“Things are done more professionally in Denmark. Handball is being played faster over there, while it is more physical in Germany.

“The step has been a good one for me, also when considering the national team. I get the chance to play a lot, and I feel really well in the club,” she explains.

With her new Copenhagen team, she is currently occupying first place in the Danish league, but unlike many experts she is not surprised.

“I am not sure if it is so surprising. We have a good team, but I am certainly not sure we can stay on top of the league table.

There are plenty of good teams in Denmark, and it is really hard to predict how the second half of the season will turn out.

“It’s a tough league, where you can easily lose a game or two and give up the top spot,” says Dulfer who admits that moving from a relatively small town like Oldenburg to the Danish capital was a bit of a shock to her, at least in the beginning.

“At first, I thought ‘Wow, such a big city!’ and I felt kind of small, but I must say that my teammates have been really helpful to settle in, and now I like it very much there.”

Playing for the Dutch national team is not the only place where she faces pressure and elevated expectations. In København Håndbold, she has to deal with it as well, as the club is aiming to reach the FINAL4 of the Champions League within a few years.

“I am not thinking that far ahead, but as I said, we have a good team, and I would not rule out the possibility in three years´ time,” says Kelly Dulfer.