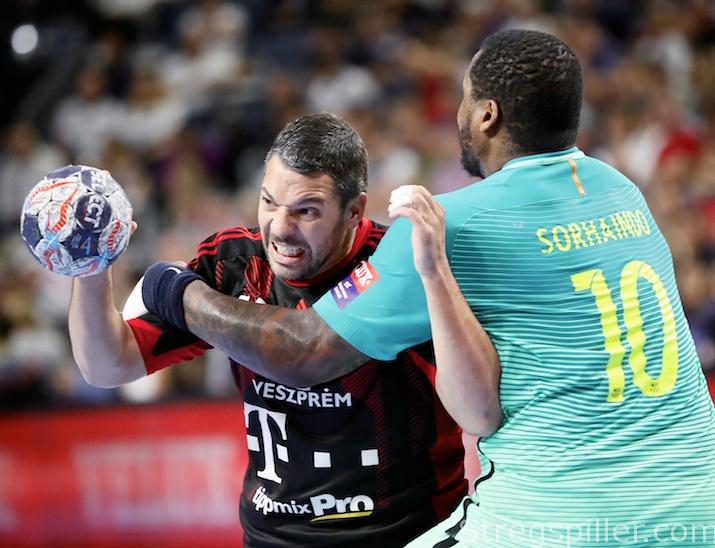 “Now, I can focus more on the fun part of handball “

At 37, Chema Rodriguez is still a name that counts in the world of handball. Seeing him sign with Saran, a club that just played one season in the French top league, raised a few eyebrows. Not only because he could have aimed for a bigger team, as his new coach Fabien Courtial pointed out: “I remember watching him playing in the Champions League on TV, but to coach him now is a little bit of “Disneyland” for me”. But there he is, the Spanish center-back, with a big smile on his face, waiting eagerly for a new season to begin.

Before your agent talked to you about Saran, have you ever heard about the club?

Sports-wise – did you have any information?

CR: I have never seen the team play. But when I was called and the project was presented to me, I liked the idea of playing in a small club, with a “family feeling” mindset, while trying to keep a spot in top-level handball.

The first time that Fabien Courtial, the coach, talked to you, what attracted you the most?

CR: Actually, he confirmed what I was looking for – a small club, with a “family” kind of atmosphere, a quiet place but also a team that looks like a bunch of friends, working together very well. Fabien told me that the club, of course, wanted to stay in the Starligue but that human values were even more important to him.

Did you look for something really different compared to the big powerhouses like Veszprem or Atletico Madrid where you played previously?

CR: Of course! When I began playing handball, I did so in Valladolid which is very much comparable to Saran. There were a lot of young players, everybody knew each other, and so did our families. I wanted to go back to this environment, in some way. Playing handball in this kind of positive atmosphere was something I was really looking forward to again.

Joining Saran is a little bit like coming full circle for you, isn’t it?

CR: Yes, a little bit. I love handball, I love playing handball and I still have a lot of fun. I’ve had a lot of fun in Valladolid before moving on. But I want to step aside a little bit from the pressure you feel in the big clubs, having to play every three days and win every game. Now, I can focus more on “playing” the game, in the true sense of the word, and spend a little bit more time with my family as well.

Talking about your family, only playing one game a week must be quite a change for you?

Yes, it is – but as I’m getting older, my body won’t complain, I think. On that subject, last season with Veszprem was crazy, playing sometimes three times a week in addition to spending all this time on the road. My kids are growing up now and I feel like I have to be there for them as well.

Was your last season in Veszprem a frustrating one?

CR: No, no, not at all. I had a role to play and I did it. When you are in a team as important as Veszprem, sometimes you play a lot and the next day you spend less time on the court. And if you take in perspective that I played with Aron Palmarsson and Maté Lekai – two of the best center-backs in Europe – it feels normal to me to have a smaller role. It was an experience, but not a frustrating one.

When Fabien Courtial compares your arrival in Saran to the one of Alberto Entrerrios in Nantes, a couple of years ago, how does this make you feel?

CR: For me, it’s a positive thing. I wanted to play in the French league. It gives me the opportunity to play at a high-level while enjoying a quieter life. Everything I heard from others like Alberto, Didier Dinart, or Jérôme Fernandez – players I’ve played with – told me about the French league, and it kind of attracted me. They always said positive things about the league and the clubs. And all of it made my decision to come to France much easier.

As a former Ciudad Real player, you will end up your career in France – is this what I hear?

CR: (laughs) I wish it would be that easy! Actually, France is one of the best leagues in the world – Bundesliga still remains the best, in my opinion. In France there are impressive teams and the level of handball is increasing every year. Players like us don’t come here to retire, because nothing’s given to us elsewhere. Playing the French league is not a vacation, but a way to end your career while still playing at a very good level. And I think many more great players will be coming in the next years.

You signed a two-years contract in Saran – how would describe “success” after these two years?

CR:  That’s a good question…success for Saran means to be in the first league in two years time. If we manage to do it this year, under different circumstances than last season (Saran remained in the first league by winning a road game on the very last day ed.), that would be a huge success.