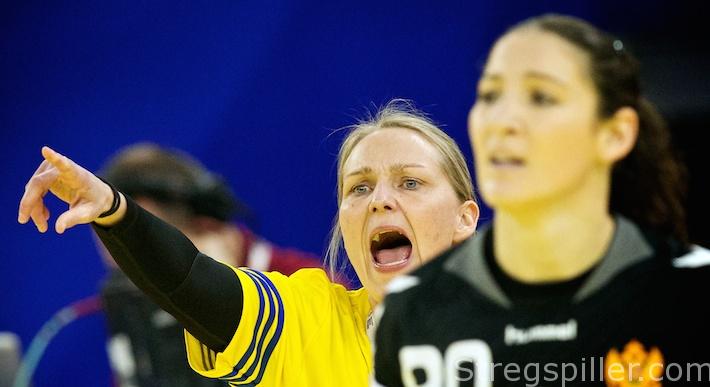 “Of course, I can help out for a fortnight!”

Helle Thomsen talks to stregspiller.com about her return as temporary coach for Sweden´s women´s team.

When Sweden´s handball women fly to Astrakhan, in Southern Russia later this month, to play their qualification matches for the 2016 Olympics, there will be a familiar face on the bench.  Danish Helle Thomsen, who was in charge of the team from the middle of 2014 until last summer, has accepted to return as temporary coach for the qualification games (March, 18 – 20) as well as the test match against Romania in Kristianstad three days before.

“It will only be for a fortnight, so of course, I said “yes” to help the Swedish Handball Federation,” explains Helle Thomsen, who will be taking care of Sweden’s handball women along with her job as coach of Danish champion, FC Midtjylland.  There, she only has to concentrate on the Danish league for now, since her club did not make it to the quarter-finals in the Champions League.

Her first period as Swedish national coach started in the summer of 2014, when she took over from Torbjörn Klingvall together with Thomas Sivertsson, former line player in the Swedish men’s national team and one of the famous “Bengan Boys”.   The unsuccessful Torbjörn Klingvall was sacked after pressure from the players.

Thomsen and Sivertsson were joint head coaches, sharing the responsibility, and at first, the arrangement looked like a success, judging by the results on the court.  Sweden took the bronze medal at the European Championship in Hungary and Croatia in December 2014, but the harmony between the two coaches was tested soon thereafter.

Last summer, after having worked with Sivertsson for one year, Helle Thomsen resigned, stating differences between her’s and Sivertsson´s views on how to play handball.  Thomas Sivertsson continued as Sweden’s head coach, but a ninth position at the World Championship in Denmark was too much – or, more precisely, too little – for Sweden’s handball federation, who let go of Sivertsson in January of this year, while persuading Helle Thomsen to come back and manage the  Olympic qualifiers.  This time, she will be on her own.

“That is no problem for me at all, and of course, I have an assistant coach too,” says Helle Thomsen who will have Kristian Kristensen from Midtjylland, by her side in Russia.

As organizers of the next European Championship in December, Sweden is not partaking in any EURO qualification games this month, unlike other nations.   Bella Gulden & Co. can focus entirely on reaching the Rio Olympics.  En route they will face Russia (the host) as well as Poland and Mexico.  The two best teams of this group will be able to book tickets and fly to Brazil, in August.

Poland finished fourth at the World Championship less than three months ago, while Russia, who were fifth, have the home advantage.  No one will be paying any attention to Mexico.

“Of course, it is a tough group, in which all teams are equally keen on going to Rio.  I see Sweden, Russia and Poland evenly matched.”

“Russia plays at home.  Aside from that, they can play the best handball in the world, when they are in top form.  However, we have also seen on several occasions that Poland has a particularly good grip on Russia.”

“Hopefully, we can benefit from those two teams taking points from each other and secure one of the two places for Rio.  I think our team is strong enough to do that,” says Helle Thomsen, while the Swedish Handball Federation is still looking for a permanent national coach.