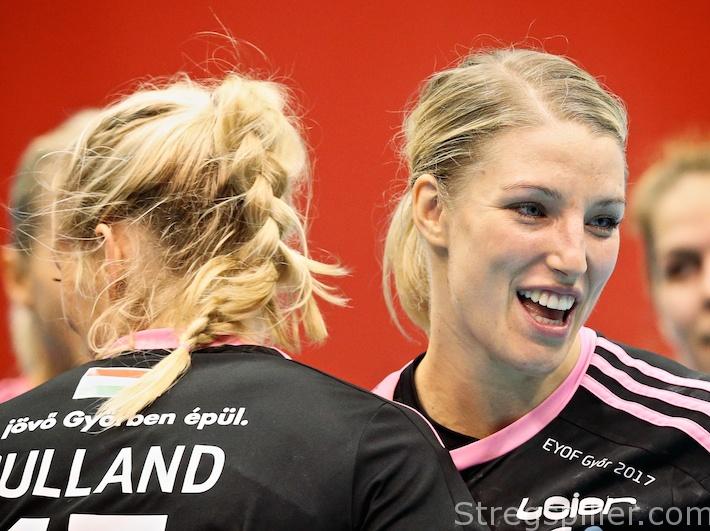 “Of course, it will be special!”

Playing against her former teammates from FC Midtjylland will be an emotional experience for current Gyor player Nycke Groot.

For one of the players on the court of Gyor’s Audi Arena it will be a particularly special experience, when the two Ukrainian referees Tetyana Rakytina and Iryna Tkachuk blow the whistle for the start of the Champions League match between Gyor Audi ETO KC and FC Midtjylland, on Sunday evening.

Gyor´s 27-year-old playmaker Nycke Groot played in Midtjylland for four years before joining the Hungarian top team in the summer 2015.  She came to Hungary with no less than four titles in her luggage:  The Cup Winners´ Cup, the Danish Championship, the Danish Cup and the Danish Super Cup.  FC Midtjylland simply won all the tournaments they were participating in last season.

“Of course, it will be a very special experience for me to play against my former teammates, as I have a lot of great memories from my time there,” says the Dutch international in fluent Danish, a language she masters perfectly after her seven years in Denmark – three years with Team Tvis Holstebro before joining Midtjylland.

“However, once the match is underway, it will be a game like any other, and of course, a win will be crucial to us,” adds Nycke Groot  who got a perfect start to the Champions’  League group phase together with her new teammates.

Their first encounter in Group C – away against one of last season´s FINAL4 participants, HC Vardar – ended in a surprisingly clear 27:22 win for Gyor.

“Our team seems to have learned a lot from last season, when the squad was beaten in the quarter-final by no other than Vardar.”   Shortly thereafter Gyor had to concede the Hungarian championship to rival Ferencvaros.

“We are all really determined to do better this season, though it might not have looked like it in our qualification matches,” says Nycke Groot, referring to the Champions League qualification tournament Gyor had to go through, in order to reach the group phase.

After a big win against Kragujevac (Serbia) in the semi-final of their qualification group in Drammen (Norway), Gyor had their troubles with host Glassverket who were leading by three goals early in the second half, before the team of coach Ambros Martin managed to tighten the grip and win by nine.

“We definitely did not get a good start in the final match of our qualification tournament.  It had nothing to do with underestimating our opponent.  We certainly did not underestimate them.  I think it was more a question of being too keen on doing as good as possible but fortunately we managed to turn the game around and qualify,” she says.

Nycke Groot admits, that joining the Champions League winner from 2013 and 2014 has marked a significant change in her life and sporting career, compared to what she was used to from the Netherlands and Denmark.

“Of course, it has been a new experience, not the least getting used to the culture and the mentality here in Gyor, but fortunately, we have been several new players who have arrived ahead of this season, and we have been good at helping each other.   It has also helped me that there are a few other Scandinavian players in the club.

Furthermore, all the players in the squad are good at encouraging and supporting each other –  so I feel I have settled in by now” she says.

As Nycke already mentioned, she and the entire club are particularly hungry for success this season following the disappointing results of the previous year.

“Of course, I hope we can reach the FINAL4 again.  We all do, and in fact, I think we have a good chance to do so.  The way I see it, we have a really strong team, so we should be able to go far,” says Nycke Groot.

For now, she and her new team got off to a perfect start with their five goal road-win against Vardar.  It will be exciting to see if Sunday’s match against her friends from Denmark will bring another success to Nycke Groot and her new teammates.