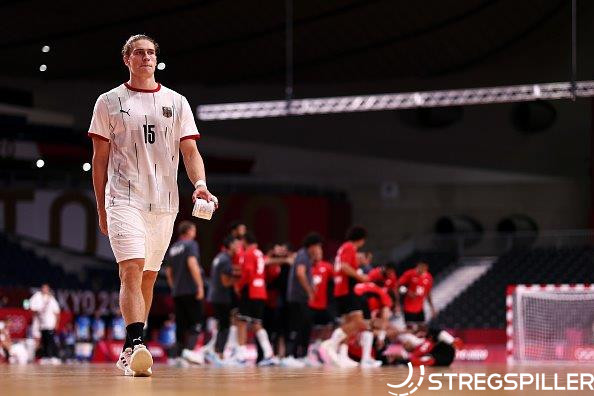 IN FOCUS: Egypt stepped closer to history on Tuesday with a dominant performance over Germany, sending them through to the Tokyo 2020 semi-finals and on course to become the first non-European team to medal since South Korea’s women won bronze in 2008.

Alfred Gislason – 5
Not shy to shake things up and take an early timeout when the players he first chose did not look up to the task but all the substitutions in the world cannot change the squad he has and his team’s shortcomings were exposed by Egypt today.

Johannes Golla – 8
Made the most of slim pickings on the line, ending up top scoring with six goals, while he was also the most productive man in defence. One of the few players who played out of his skin for Germany.

Marcel Schiller – 7
Had a very decent game on the left wing, showing he is the in-form player in that position with five well-taken goals.

Julius Kühn – 7
Settled the nerves a bit with three quick goals after Germany fell 6:1 down. Ended up with six goals and three assists as he emerged as Germany’s only real back court threat.

Timo Kastening – 6
The ball barely reached him out on the right wing but he made the most of the chances he got, scoring three from four shots.

Steffen Weinhold – 5
Played a supporting role in Germany coming into the game, creating movement and space for Kühn to score, then popping up with an odd shot himself. Didn’t get himself into the shooting positions he likes and it showed with two goals from five attempts.

Kai Häfner – 5
Thrown into the attack in the second half and made the odd impact but not regularly enough to change this German back court’s misfortunes.

Hendrik Pekeler – 4
Took a while for him to be involved in attack and won a penalty as soon as he did. Besides that, he did most of his work in defence but was unable to impact the game as he would have liked to.

Paul Drux – 3
Replaced for the first time after just five minutes, which proved to be the right decision as Kühn played well. His physicality was matched by Egypt, rendering him ineffective.

Juri Knorr – 3
Beautiful blind pass into the line as soon as he came on but that was as good as it got for Knorr. Four missed shots in just over seven minutes on court and not much else.

Johannes Bitter – 3
Came on for a while in the first half and was unable to reproduce the brilliant form he displayed until now with just one save from nine shots on goal.

Andreas Wolff – 2
Barely got his hands to anything today, just three stops at 12% as Wolff and his defence allowed Egypt to score for fun.

Philipp Weber – 2
Somewhat anonymous for much of the first half, predictable and stiff when he did come into the action. Had a chance to show that Germany’s playmaker problem was nothing more than a media construct but he just went and proved it was their downfall on the big occasion.

Roberto Parrondo – 10
What a day for Parrondo, his men and Egyptian handball as they made history by reaching the semi-finals for the first time. He set out his team to exploit Germany in every area of the court and it worked to perfection.

Karim Hendawy – 10
Involved right from the start when he came out of his area to intercept a fast break, setting the tone for Egypt’s day. His huge double save early in the second half killed the momentum Germany appeared to be building and he was dominant all day with 18 saves at 41%.

Ibrahim Elmasry – 9
Had a huge role to play in the centre of Egypt’s defence as they completely outmuscled and outmanoeuvred the Germans. Worked perfectly in tandem with Elderaa in the centre of defence and did all this without picking up a suspension.

Yehia Elderaa – 9
One of the busiest men on the court for Egypt today. Battled hard alongside Elmasry in the centre of defence and split time in the playmaker position in attack. A man who can create something out of nothing and always persevere. It worked against him on a couple of occasions but that cannot take anything away from his overall performance.

Ali Zein – 9
What an impact player to have on your bench. Came in and offered variation when called upon. Scored some brilliant goals among his five today as well as three fine assists, a crosscourt pass to Sanad being the pick of the bunch.

Mohammad Sanad – 8
Mr. Reliable on the right wing. Ran hard all day and wasted no time in scoring on each of the four opportunities he was granted, an incredibly valuable asset to have in a team which focused on the middle of the court.

Ahmed Heshem – 8
His tenacity and movement in the backcourt made him a nightmare to deal with. Knows what he can contribute as a playmaker and he played to his strengths, taking all three of his chances to score.

Yahia Omar – 7
Took a while to get into the game but made his mark with a huge crosscourt shot after 20 minutes. That was Omar’s turning point as he went on to score five good goals and connect brilliantly with his fellow backcourt players.

Adel Mesilhy – 7
Relentless effort on the line when he came in to relieve Mamdouh of his duties. Full credit for his contribution, including one of his two goals where he beat three German defenders with pure will and determination.

Mohamed Mamdouh – 7
Found himself in plenty of space right from the off and took full advantage early on. Didn’t enjoy as much luck after that but did enough to keep Germany’s best defenders busy while the back court took care of business.

Omar Elwakil – 7
Occupying perhaps Egypt’s weakest position but did not let the team down on the left wing. Barely touched the ball more than the three times he got it in scoring opportunities and he did not disappoint.

Ahmed Elahmar – 7
A short and sweet appearance for the legend of Egyptian handball, gets a rating of 7 for his perfect three from three on the 7-metre line.