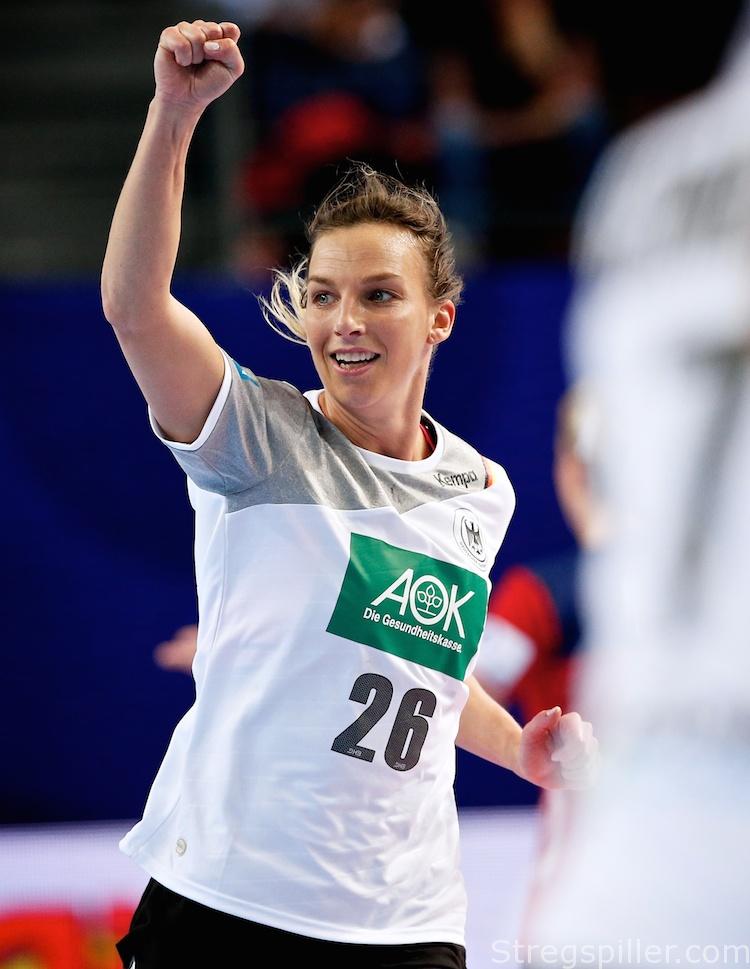 On this day in handball history…

FEATURE – Germany´s fate at the 2018 EHF European championship, in France will be decided on a historic day in German women´s handball.

On Wednesday, when Germany face the Czech Republic, it will mark the 25 year anniversary of Germany´s first World Championship title.

Veteran player, Angie Geschke, does not expect it to play a big part in players’ heads before the important match.

When Germany´s women’s handball team will play their last and deciding group match against the Czech Republic on Wednesday evening, they will be doing so on a historic day in handball history.

On December 5th, it will be exactly 25 years since Germany became Women´s World Champions for the first time since reunification.

Back in 1993, Germany won the final 22:21 against Denmark, in Oslo, after extra time. Now, 25 years later, Germany´s women play another crucial match.

At least a draw against the Czech Republic at the ongoing EHF European championship will be necessary to advance to the next stage of the tournament.

However, 33-year-old, Angie Geschke, does not expect the historic aspects to play a big role in players’ minds leading up to the fight against the Czech Republic.

“No, we are not going to focus on it, but of course, we will try to perfect this historic date by qualifying for the main round,” she says.

But before it all happens, Germany had to digest a 29:24 loss against Romania this past Monday. Naturally, Angie Geschke was not happy – not with how the game went, nor with the result.

“To me it wasn’t a very nice experience, as we didn’t use the gaps in their defense and on several occasions we missed some wide open shots.

“As we went down by seven goals, we actually knew that there was not much more to be gained, even though we made a fine comeback in the last minutes of the game” she tells stregspiller.com.

Mentally harder than against Norway

After the 33:32 opening win against Norway, several German players spoke about the happy-go-lucky attitude in the team and they found that the pressure-free spirit had helped them a great deal in the match versus the Scandinavians.

Following the impressive victory against Norway, all of a sudden expectations were running higher and Geschke confirms that the shift in mindset made the match versus Romania a bigger mental challenge compared to the game against Norway.

“Yes, it was – we knew that we would have to fight hard to bring out the easy-going attitude and that’s not as easy for us as it is for some of the other nations.

“This time, we may have felt some pressure because of the attention we had drawn after the win against Norway, she finds.

On Wednesday evening, a last and decisive match against the Czech Republic is on the menu – a game that will require at least a draw to make sure that Germany will reach the main round of the competition.

“Of course, it’s an extremely important match and we do not even think about the possibility of a draw.

“Obviously we want to win the game and I think that we’ll succeed, simply because of the quality of players, we have in the German team. In any event, we will do all we can to win it.

“We will scratch, bite and fight,” she promises.

And, in the case of a loss Germany will have to wait for another three hours or there about, before the result of the late game between Romania and Norway will be finalized.

If Romania beats Norway, Germany will still advance to the main round, but Geschke does not even want go down this road.

“We will prevent that from happening – at any cost.

“We don’t want to depend on others; we want to rely on our on skills and remove any doubt about our main round berth,” she says.

“I don´t feel that experienced”

As the oldest player on the German roster, she – by some measure – is the most experienced player, someone who can appreciate the current situation better than others. However, she does not see it quite the way herself.

“I do not feel that experienced, after all.

“I never spent much time in the backcourt of the national team, but on the wing instead. Actually, now I do have a new role in the team and I try to fit in as good as I can.

“Wherever there is a need, I try to help and when I succeed, it’s good and if not, at least I did whatever I could,” she laughs.

“However, there is no doubt that I am going to enter the court on Wednesday evening, determined to win this game.

“We do not want to get into a situation, where we’ll have to catch up a deficit once again. We want to control the game, and that’s what we intend to show on the pitch,” concludes a confident Angie Geschke.