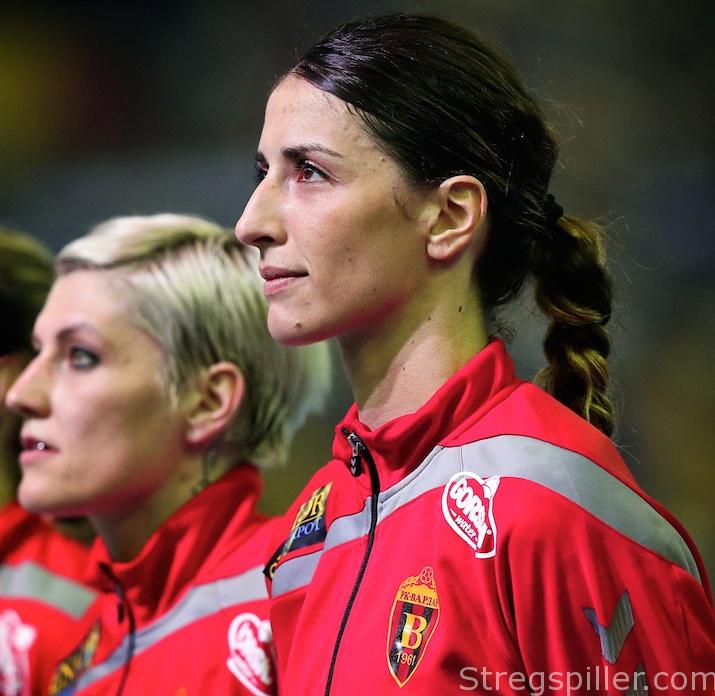 INTERVIEW – Vardar star Andrea Penezic won’t be ending her career at the end of this season, after all.

In this exclusive interview with stregspiller.com, she reveals that she has changed her mind adding another season, but not in Vardar.

Andrea Penezic will play handball at the top level in 2018/19.

By itself, the decision should not be sensational news, as the 32-year-old Croatian left back is at the peak of her career.

She has scored 59 goals for HC Vardar Skopje in the current Champions League season, and she has been playing a major role in Vardar’s undefeated track record as they have won all nine of their matches so far this season.

Before Christmas, however, several media outlets reported that she was going to end her career in the summer of this year.  As it turns out, we’ll be getting the opportunity to enjoy her skills on the handball court for some more time.

“It is true – I was thinking of ending my career, but think there is more handball in me. So, I have decided to continue playing handball for at least another year.

“Right now, I am negotiating with several clubs, and at this point my destination is still unknown.

“I expect everything to be solved real soon, though,” says Andrea Penezic without revealing the names of the clubs she is negotiating with.

The only certainty – Vardar won’t be in her plans going forward, as the Macedonian flagship club is losing most of their team once the current season ends.

Last week, it became official that a star trio including Andrea Lekic, Dragana Cvijic and Jovanka Radicevic will be joining CSM Bucuresti, while goalkeeper Amandine Leynaud will continue her career in Györ. And World champion, Alexandra Lacrabere, will represent the colors of Fleury in 2018/19.

This season will be Vardar´s last opportunity to win the Champions League.

The ambitious club from the Macedonian capital has been attending the Champions League FINAL4 in the previous four years and after finishing in third place on three occasions, Vardar advanced one position in 2017, when they lost the final narrowly to Györ (31:30).

“Every time, we had the same goal – winning the trophy.

“For four years, we have been trying step by step and game by game to get there, and maybe, this year will be our year, finally.

“Sometimes you just need to be patient and good things will happen.

“Considering the new situation in Vardar, where all players will be continuing their careers somewhere else, it’s obviously our last chance to win the Champions League with this team.

“We are already sure to reach the quarter-finals, but finishing as number one in our group is still our goal.

“We still have three very important matches left to play in the main round, before we have achieved this particular objective – we do not intend to miss one single point along the way,” says Andrea Penezic who is not surprised that she and her teammates have been performing so consistent this season.

“As a team, we have a lot of experience, as most of us have been playing together for four to five years now.

“Another reason for our success this year in particular may be explained by the fact that our coach has remained the same from the start of the season,” she adds with a smile, referring to the frequent changes of Vardar coaching position in previous years.

“However, everything we have achieved thus far won’t matter, if we do not continue playing with the same tempo until May and the FINAL4,” she realizes.

An easy bracket in the 2017/18 Champions League season is yet another reason illustrating Vardar´s achievements. In Group 2 of the main round, Vardar are up against FTC, Metz, Buducnost, Bietigheim and Thüringer HC, while Group 1 includes three of the other favorites for the title – CSM, Györ and Rostov-Don.

“Maybe it’s true that our bracket is easier than the other one, but in the end it does not matter to me at all.

“If you want to become the champion and win the trophy – and we do – you have to beat every team,” Andrea Penezic tells stregspiller.com.

Sunday, March 5, 2017 will probably always stand out as a disappointing day in Vardar’s handball history, at least when it comes to women´s handball.

It was the day when Vardar lost by as much as 42:28 away against Metz Handball in the main round of the 2016/17 Champions League season. If I had not seen it with my own eyes, I would not have believed it.

In this match Andrea Penezic scored 10 goals, but the success on the personal level could not compensate for the humiliating loss.

“No, it did not. Last year, we played our worst game of the season in Metz.

“It was just not our day. We missed everything we could possibly miss.

“This will not happen again – or, at least, I hope it will not!” she says.

The reason for bringing up the nightmarish experience again lies in the fact that Metz will await Vardar in their next Champions League match.  On Sunday afternoon, Penezic and her teammates will enter “Les Arenes” in Metz once again, trying to avenge last year’s dramatic defeat.

“This won’t be easy, though. I agree with those who say that our game in Metz will be our toughest challenge so far this season.

“Metz has an excellent team spirit, and at home they play with some special energy.

“However, we want to wash off the stain from last year so badly,” ends Andrea Penezic.