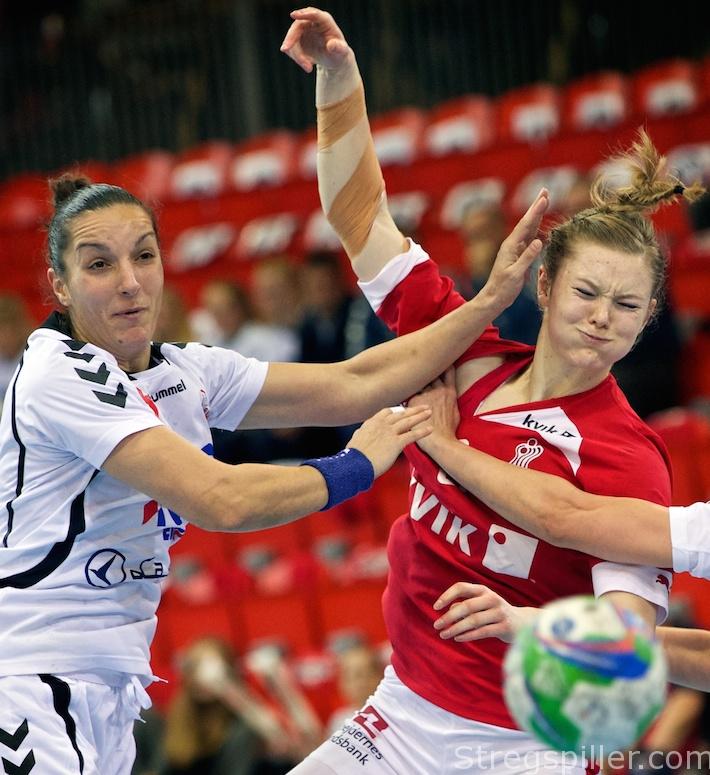 Most Open EURO Ever But Still With Favorites

The EHF EURO 2014 in Hungary and Croatia seems to be the most equally balanced women´s European Championship ever.  Still, it is possible to point out teams that are somewhat bigger favorites than others and also a few that are expected to leave empty handed at an early stage of the tournament.

Denmark´s national coach Jan Pytlick has predicted that 14 out of the 16 teams can possibly take a medal.

He is probably close to being right, although we can safely reduce the number to 13 if Serbia does not get their many injured key players fit in time.  In case Serbia does not, the team will join Slovakia and Ukraine in forming a trio that is unlikely to get anywhere near medals.

But let’s try to find out who are the favorites, who are the dark horses, and which teams will have plenty of time for their Christmas preparations.

Group A: Hungary will make it even without Görbicz

Of course, the absence of pregnant star player Anita Görbicz has been a major theme ahead of the tournament and it will continue to be.  “There is no substitute for her”, as one of Hungary´s other key actors, Zsuzsanna Tomorí, told me recently.  Tomori is one of the players who will have to step up even more if Hungary is going to be successful without its biggest star.

However, supported by an enthusiastic crowd in Györ, they will still be able to make it, even in a tough group with Russia, Spain and Poland as opponents.

I do not like the word “death” in connection with sport, but people with a sense for drama already have baptized Group A as the “Group of Death”.

While there is not much doubt in my mind that Hungary will win the group, even without Görbicz, it is much harder to predict which squad will have to go home after the preliminary round.

Having missed the World Cup last year, Russia is determined to do well once again.  Yet, it remains to be seen if the decision to bring back Yevgeni Trefilov was a wise one.

Spain is optimistic as well and Poland surprised a lot of people in Serbia by reaching the semi-final at the World Championship in 2013.

Still, I do not see the Polish girls repeating their successful performance this time around.  Not even if playmaker Kinga Byzdra will recover from injury.  My fellow Dane, Kim Rasmussen, who is national coach in Poland will not like me for it but his team will be leaving the competition after three preliminary matches.

“This is why Norway may be able to a surprise at the EURO”, read a recent headline in Norway’s newspaper VG.

I admit that I had to read that headline twice to make sure that I had not missed anything or my understanding of Norwegian being possibly worse than I thought.

But it was correct indeed. The article was a commentary from one of Norway´s leading handball experts, journalist Jostein Overvik, who claimed that Norway is still in a position to be a challenger but not a favorite.

Winds of change are definitely blowing in Norway and his cautious assessment is understandable after a disappointing fifth place at the World Championship last year and two consecutive defeats to its southern neighbor Denmark within the last six weeks.

Obviously Norway’s performance is boosted by Heidi Loke´s return as the main line player and the absence of pregnant, world class goalkeeper Katrine Lunde has been compensated by brilliant performances of  Silje Solberg and Kari Alvik Grimsbø in particular – so far.  Still, the Norwegians are in a tough bracket and one of the major obstacles to win Group B will undoubtedly be Denmark.

Jan Pytlick´s team looks good – really good!  Of course, the recent loss of injured line player Marianne Bonde will be felt in central defense but Louise Svalastog seems to be just the right replacement.  She may not have been in the team for the past two and a half years but she still knows the defensive system of team Denmark, at least as long as coach Pytlick sticks to its 6:0 formation which – in my opinion – would be wise.

Just as important – Svalastog is used to playing central defense together with Pernille Holmsgaard at their club København Håndbold.  The duo should be able to transfer their good team work from the club level to the national team.

All in all, the Danish squad possesses so many qualities that first place in Group B seems to be a realistic goal.

Experience is always important in handball, like in most other sports I know of, and experience is what Romania brings to the table.  Therefore, no one should write-off the Romanian squad, even though they appear to have only modest expectations, aiming to finish amongst Europe’s top eight teams.  The easy prediction in this group is pointing out the team that will be going home after its first round matches.

Ukraine appears to be significantly weaker than the other competitors and therefore will only get those three matches in Debrecen to leave an impression.

Home court advantage always plays a great part at championships.  Just like Hungary will benefit from being hosts, so will Croatia.

The Croatians may not be the strongest team in Group C but with the support from an enthusiastic home crowd and because of the skills of key players like Andrea Penezic and Miranda Tatari, they will win this group.

When it comes to pointing out the squad that will follow behind, the forecast becomes harder.

The Netherlands seem to have a sparkling crew and will most likely reach the main round.  Under its new coaching duo, Helle Thomsen and Thomas Sivertsson, Sweden has produced convincing performances in qualification- as well as in test matches.

All of it means that another Danish team leader will have to bite the dust early.  Team Germany, together with head-coach Heine Jensen, will be travelling home to decorate Christmas trees much sooner than they would like.

There is only one relatively easy prediction to be made in this group.  Slovakia will not get any further as they look to be the weakest one of the four teams.

However, Serbia may come close to an early exit as well if they do not get at least some of their six injured, key players fit in time.  Without players such as Andrea Lekic, Kristina Liscevic and Sanja Damnjanovic as well as Katarina Tomasevic in goal, national coach Sasa Boskovic will need to do more than grabbing opponents by their shirts (like he did with Linn Jørum Sulland at the 2012 European Championship) in order to advance his team.

The question that remains to be answered is what France and Montenegro are capable of this time?

It is difficult to see Montenegro copying their triumph from Serbia in 2012 when they stunned the handball world by winning the European Championship in the first competition after Bojana Popovic had ended her career as a player.

Montenegro has not really been convincing since then.  Still, in this particular group, their qualities should suffice to qualify for the main round while securing the second spot.

This leaves France as the group winner.  Not an unlikely choice, as the team has been blooming under Alain Portes lately.  Experienced star players such as Amandine Leynaud, Allison Pineau, Alexandra Lacrabère and Siraba Dembele are still crucial to the team, but young talents are popping up as well.

Main round groups even harder to predict

This leaves us with two main round groups which will look like this (teams listed in the order as I expect them to emerge from group phase):

If the preliminary round was hard to predict, the outcome of the main round seems even more difficult to foresee, but let’s give it a try.

Moving from Györ to Debrecen should not reduce the amount of support for the Hungarian team and it may very well go on to take first place in this group as well.  Of course, a lot depends on the points the respective teams will have with them from the earlier round. The other semi-final berth seems to become a battle between Denmark and Norway.  Once again, I believe more in the team from Denmark, that I expect to have taken two points from Norway in the preliminary round, which will place them above the Scandinavian neighbors.

But who are Hungary and Denmark to meet in the semi-finals in Budapest?

Main Round Group 2: Croatia continues to ride the wave of support from the home crowd.

Just like Hungary in Group 1, Croatia is expected to move on while being carried by their home crowd in Zagreb.

It will be close, but Croatia will win the group and in the race for second position France will emerge as the triumphant team, ultimately.

This leaves us with two semi-finals that any handball aficionado can only dream of.

Friday the 19th of December in Budapest will be like Christmas Eve five days early with the semi-finals of Hungary vs. France and Denmark vs. Croatia.

Second to last question – who will go to the final?

Once again, I place my faith in the Hungarian team (and their fans).  Tomori & Co. will defeat France while Croatia will be without the massive support from their home crowd for the first time in the tournament.

Denmark will be the beneficiary of such circumstances and avenge the defeat against Croatia in the qualification rounds that led up to the 2012 European Championship.  I am looking forward to team Denmark qualifying for their first final match at a major championship in the past ten years.

At the same time, it will all translate in yet another special Christmas present for handball fans on Sunday when Hungary and Denmark square off in the final game of the tournament, following Croatia’s narrow defeat against France for the bronze medal.

So who will take the trophy and the most precious of all medals at the end?

My prediction is Hungary.  Even without Görbicz, the hosts will be strong enough to go all the way spurred on by their fantastic fans.

Will I be proven wrong?  Probably in some aspects since handball is not nearly as predictable a game as many people would like to see it.  And this is only one of the reasons why we love this sport so much, is it not?

I wish everyone a great Women´s EHF EURO2014.