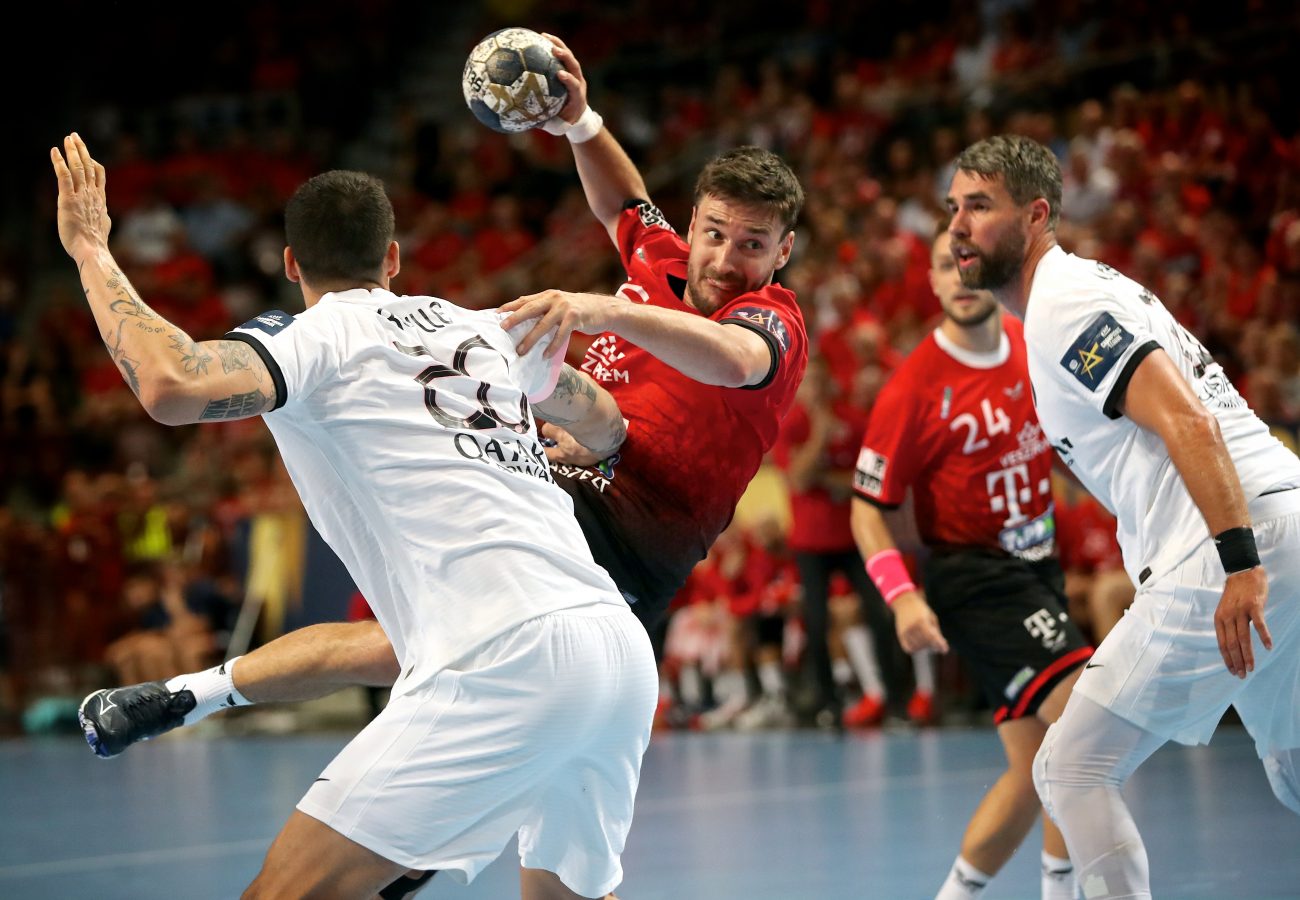 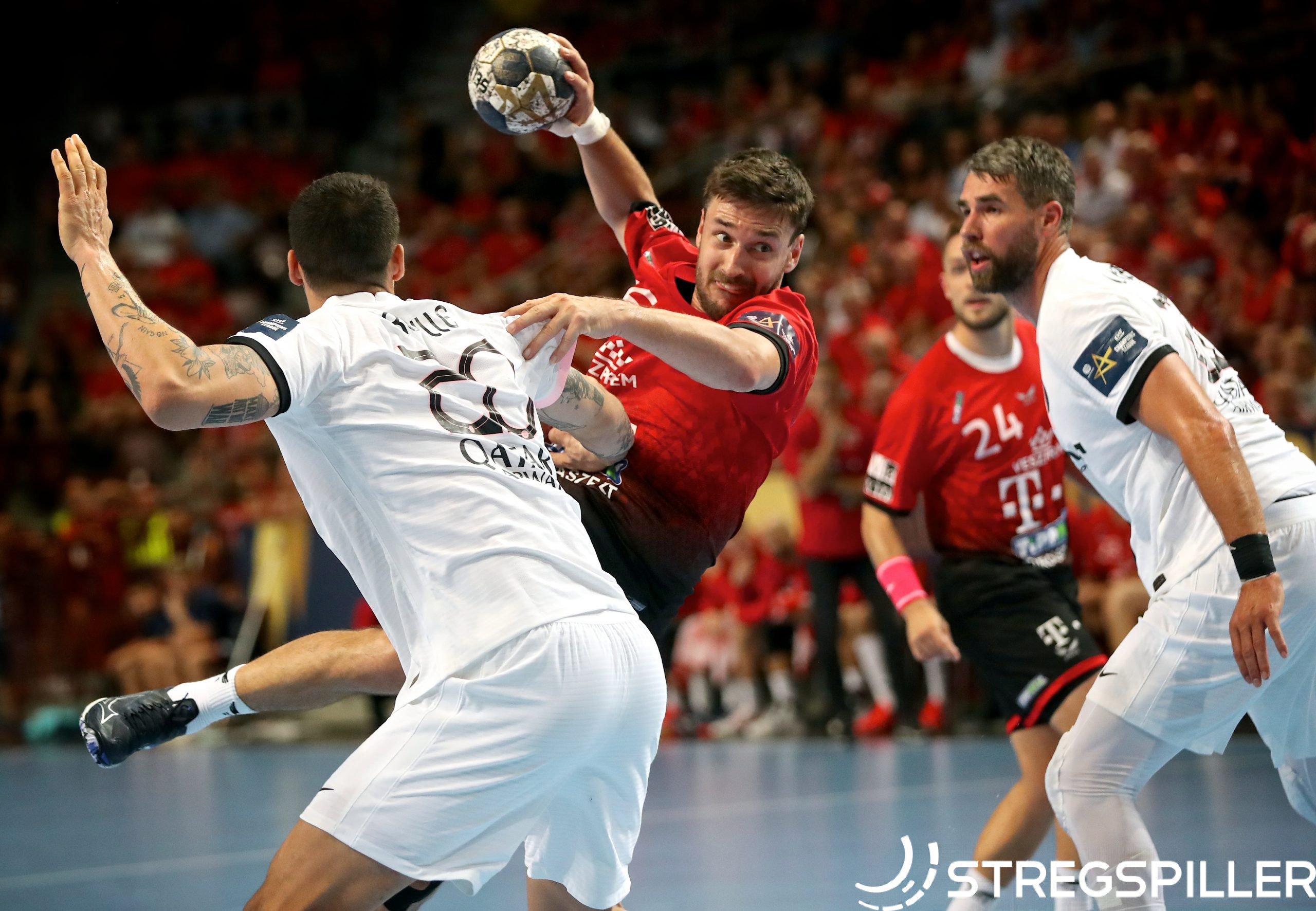 Europe’s premier handball club competition is back and there is much to look forward to.  Among other reasons a whopping 8.5 Million EURO’s will be at stake for the teams competing in the men’s and women’s 2021/22 EHF Champions League.

Including the EHF European Handball League and EHF European Cup the total prize money approaches almost 12 Million EURO’s – much appreciated funds for most organizations after suffering through the Covid-19 pandemic.

Certainly, Telekom Veszprem and Paris St. Germain will be two squads who will fight for the lion’s share of the record setting prize fund and the opening round of the competition at Veszprem arena would set the tone in a powerful Group B, including the record Champions League winners from Barcelona, SG Flensburg-Handewitt the 2014 champions and the ambitious Polish site from Kielce.

In the end the home team walked away as winners despite trailing by four at the half.

A vociferous – near capacity crowd – at Veszprem arena pushed their squad over the finish line.  Ten minutes before the final whistle Mathe Lekai scored the equalizer and Veszprem never looked back. For the freshly minted head coach, Momir Ilic, it was a successful start in the 2021/22 EHF Champions League campaign.

After trading goals for the better part of the half, Paris made a late push and went on a 4:1 run five minutes before the break.

The team of head coach Raul Gonzalez appeared to be in firm control of the affair, backed by a strong defense effort.

Although, Veszprem tried hard to change the course of the game, PSG had an answer every time Lekai & Co.came within one goal.

The 4,600 supporters would have to wait until the 50th minute before their team would turn the table for good. In the final ten minutes of the match, the host outscored Paris 8:5 with Mathe Lekai and Yahia Omar inflicting most of the damage.

For 60 minutes the Covid-19 pandemic appeared to be a thing of the past.  A frenetic and mostly mask-less crowd pushed their team over the finish line.  For most of the match it looked and felt like Paris would leave Hungary with a victory in tow, but Veszprem could rely on their home court advantage and a very noisy arena.

When Lekai tied the match with 10 minutes on the clock, the place erupted and it all went downhill from there for the French visitors.

Congratulations to Paris Saint-Germain, they could have won the game too. It was an amazing first game for me in Champions League, I’m very satisfied with the victory, the players have shown real character in the second half. We made a lot mistakes in the last 10 minutes of the first half, we gave away a lot of balls, we conceded a lot of fast break goals. Also, in the middle of the second half we had a bad period, we missed a lot of chances and three penalties. But the victory is the most important, I’m really happy with it.

Congrats to Veszprém. I think we played very good at the first half, but we made some mistakes especially in the second half. I think we had a good start to the match – in defense and in attack as well. It made the difference before the break. In the second half everything changed. They got much closer and we played with one player less for a long time.  They kept playing better and better, had a good run for 15 minutes and won.

Like my coach said,we were better in the first half, but in the second half  Veszprém was better. It’s not enough to play well for only 30 minutes – we have to improve. We made a lot of mistakes, mostly in attack. I think we lost because of our weak play in attack. For the next game we have to prepare better.

We played a fantastic match – it was a typical Champions League game. I am satisfied with our performance and with the victory. We stepped on the court with a huge motivation and we showed how to play on home court with a team like Veszprém. I hope we can continue the upcoming matches on this high level.