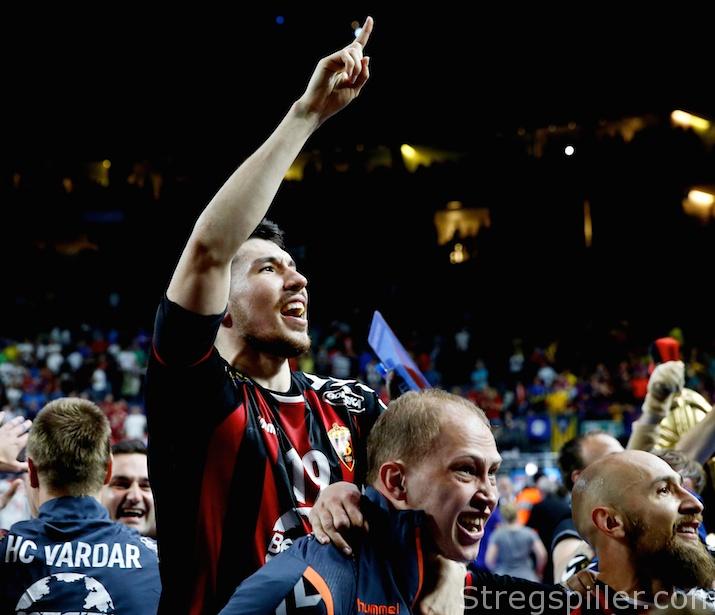 Is he truly convinced? Find out in this exclusive interview with the Spanish star from PGE Vive Kielce.

He knows better than most what it takes to win the Champions League.

In 2017, Alex Dujshebaev won the competition with Vardar Skopje, when the Macedonian club were the debutants at the FINAL4, in Cologne.

The success at the time was just as big a surprise as when Dujshebaev´s current club, PGE Vive Kielce, took the trophy, in 2016.

In order to reach yet another FINAL4, he and his Polish teammates are up against no other than mighty Paris Saint-Germain Handball.  Dujshebaev´s memories against this opponent are not the best.

Last season, Kielce also ran into PSG in the quarter-final and after the first half at Hala MOSIR, the Polish champion was down by 12 goals, as PSG were leading 22:10 back then.

At that point it meant game over, even though Kielce caught up half of the deficit in the second half, limiting the loss to 34:28 before surrendering by three goals (35:32) in the French capital, one week later.

Alex Dujshebaev is well aware that he and his teammates will have to avoid a first half similar to the one last year, when PSG visits on Saturday.

“Actually, I don’t think we played as bad as the halftime score looked back then.  We missed a number of wide open shots in the first half, several of which were one-on-one situations against the goalkeeper after fast-breaks and from the line position.

“When you miss such opportunities, you obviously provide your opponent all the chances to score easy goals, and when you play against a team like Paris it will be deadly.  They are extremely good running fast-breaks; so that is what we will have to avoid,” says the 26-year-old right back, who is playing his second season in Kielce, after leaving Vardar in 2017.

“I was happy in Vardar – both clubs are obviously among the top in European handball. When asked to point out a difference between Vardar and Kielce, I’d say that Vardar is probably more a big city club.  In addition, all of Macedonia is behind Vardar –  they are the pride of the country. Here, only Kielce cares about Kielce!

“The fact that we are a smaller Polish city makes it easier to feel like the locals,” explains the Spanish international, who recently extended his contract with Kielce for another three years until the summer of 2022.

” I think it is a great club, we are making progress and, simply put, I’m happy here.  I believe in this project and  that was the key reason why I determined that for me the best option is to stay.

“It was easy to join in the first place, as everyone received me well.  In general, I believe we have a great team spirit.

“Right now, we are in a transition period. Every year our team gets younger – not necessarily better – but different.  As I said, I believe in our project and I am sure our future will look great,” he expects.

Of course, the question that needs to be asked, is what it’s like to have his father, former world-class player, Talant Dujshebaev, as coach and playing together with his younger brother Daniel?

“Having my father as coach is special, and ‘yes’, it sometimes is a bit peculiar. But, on the other hand it’s rather simple after all. He is the coach and I am the player and when we are on the court we are all equal.

“As far as my brother is concerned – well, he is injured at the moment, but apart from that, it has been a good experience playing together with him. I believe in him a lot, and I expect our cooperation to get better every year,” says Alex Dujshebaev, who plays right back most of the time, but has performed as center back as well, especially during the time, when Croatian star playmaker, Luka Cindric, was injured.

“Being playmaker is different – you have to think more and plan what you want to do next. What will work better against a particular defense formation?  What’s the best move to create a scoring opportunity?  You have to be very focused on everything that’s happening on the court.

“It is easier to play the other back-court positions, as the playmaker will tell you, what to do.

“As center back, you have to think about all of this yourself and that makes it more challenging,” he finds.

Saturday evening, he hopes to start in the right back position, when Kielce will do everything to avoid another nightmarish performance against PSG.

“We cannot miss open shots, as it will make things very difficult for us.

“At least, that’s the situation at the start, then we will see how things develop as the game goes on.  After all, it will be decided over  the course of 120 minutes and before it all begins we have as good a chance as our opponent,” claims Alex Dujshebaev.