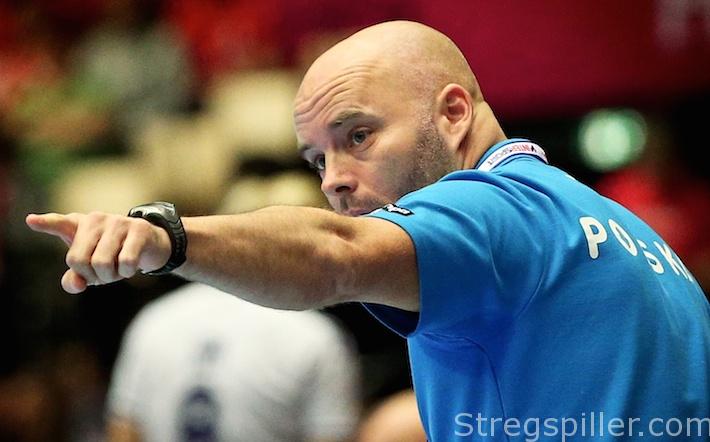 “Our spirit can take us far!”

INTERVIEW – Poland´s Danish coach Kim Rasmussen speaks to stregspiller.com about his team´s World Championship thus far and his expectations before the semi-final match against the Netherlands.

Poland has been one of the biggest and most positive surprises at the 2015 World Championship.  After some inconsistent performances in the preliminary round (the squad finished third in Group C), not many people – apart from the team and their most enthusiastic fans – expected to see them amongst the final four contenders.

“But, now I am standing here, talking to you the day before the semi-final,” Poland´s Danish national coach, Kim Rasmussen says, in Herning’s Jyske Bank Boxen on a rainy afternoon.
It was viewed as a big surprise, when Poland eliminated Hungary 24:23 in the eighth-final – and it was considered to be a sensation, when Poland’s women handball team sent title favorite Russia out of the competition with a 21:20 win in the quarter-final.  When asked to explain why his team stands in the semi-final of a World Championship for the second time in a row, Kim Rasmussen mentions spirit and cohesiveness as the most important factors.
“My players have an enormous will to win and they are prepared to do virtually anything to achieve their goals.  I think it is best illustrated by the fact that Karolina Kudlacz has probably been playing the whole tournament with a broken finger.  She receives treatment three to four hours every day, but she refuses to withdraw from the competition or even to have an x-ray.”
“Furthermore, there is a great spirit in our crew.  The players believe in themselves and we all together trust each other,” explains Rasmussen.

He is the first one to admit that Poland´s start to this championship was far from being convincing.
“You are absolutely right – we lacked stability during the group stage.  Actually, we played terrible most of the time in our preliminary group.  We had a very good preparation phase and some fine results in our test matches.  It led us to believe that we would go to Denmark and play a great tournament, win big against Cuba, China and Angola, play good matches against Sweden and the Netherlands and get far,” says Kim Rasmussen.

As is known by now, Poland did go far, but it certainly did not work out as planned.
“We started with a poor performance against Cuba (27:22 for Poland).  Then we played well against Sweden but lost by a small margin (31:30) and then followed up with  another poor match against China (29:24 for Poland) and another one against Angola (29:27 for Poland), before the disastrous game against the Netherlands (a 31:20 defeat) marked a low point.

Forget the past – look at the future

“It was obvious that things could not go on like that; so after the preliminary round, we all sat down and agreed to forget the past and look at the future.”
“We agreed on the following: Allright, our five preliminary matches were all test matches.  We have known all the time that we would get at least six matches at this championship, now let us get the best out of it.  So we reminded each other once again, that we trust each other and believe in each other and confirmed our will to win,” states Kim Rasmussen.

“This attitude paid off against Hungary, even though we were still very inconsistent in that game too.  We were leading by six goals at 11:5 – and then all of a sudden, we lost a period 8:0 and fell behind.  Still, we managed to come back and win the match.”

“It is that will to win that I love so much and which suits my own temper so well.  Just like me, the players want to win at almost any price – they simply hate to lose.  This is the spirit that has brought us thus far and it can bring us even further,” says Rasmussen, who has been in charge of the Polish national team since 2010.  Aside from leading Poland’s national women handball team, he also finds the time to be head coach of the ambitious Romanian club, CSM Bucuresti, with whom he has qualified for the Champions League main round this season.

Huge respect for The Netherlands

While Poland has been one of the positive factors at this World Championship, the Netherlands have been the other squad that has caused a stir.  Friday evening, the two nations will meet in the semi-final.

“I do not see the Netherlands as a surprise at all.  I think they have a fantastic team.  Just like ourselves, they are very good two-against-two and one against one.  They have some outstanding players, who are the result of how the Netherlands develop talents – a way I admire very much,” says Kim Rasmussen.

Of course, it is natural to have a certain respect for an opponent who has beaten you by 11 goals once already in the same tournament, but despite his admiration for Dutch handball, Kim Rasmussen firmly believes in a Polish victory on Friday evening.
“I feel sorry for the Netherlands that they won´t get past us.  If they were not running into us, I could very well see them as World champions.” he says and laughs. He believes to have the recipe for defeating the Netherlands.
“I am not going to reveal it here as I do not want our opponent to be able reading about our tactics in advance.  However, I am sure everyone can agree that we will need to get a grip on their back-court players.”
“Apart from that, we have our spirit – and that can take us far,” believes Kim Rasmussen.