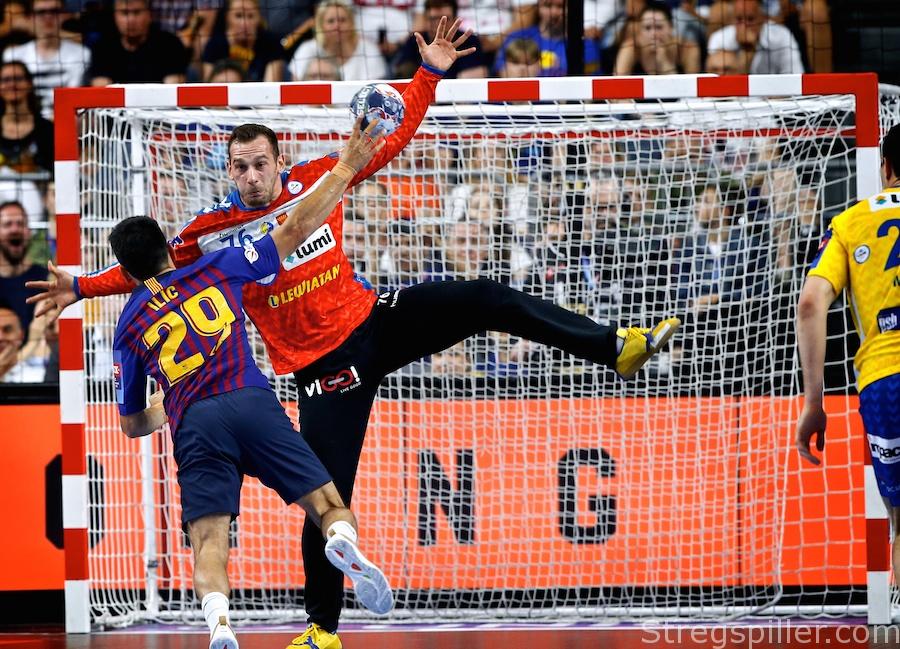 “These FINAL4’s live a life of their own,” Barca coach Xavi Pascual told stregspiller.com the day before the event started.

In the semi-final on Saturday, he certainly had to realise the truth in those words, as he saw his team lose a seven-goal lead and the match against Kielce.

On Sunday afternoon, he would be pleased that the special life of the FINAL4 went his team’s way, while his fellow Spaniard on the opposite bench, Talant Dujshebaev received no present on his 51 years birthday.

Aron Palmarsson had a great part in ruining the Kielce coach’s birthday.

With an impressive performance, the Icelandic playmaker had a big hand in the Catalan win on a day when defending was more or less neglected on both sides.

The pace was high in the first half – in the game as well as in terms of goal-scoring, and Barca turned out to be better suited to this pace.

After Kielce had opened the match with many one-goal leads, Barca took over, and after turning a 3:2 deficit into a 5:3 lead, they never really looked back.

Their success had a lot to do with Aron Palmarsson.

Bringing a stellar performance as the playmaker, the Iceland international provided one amazing assist after the other, practically all of which resulted in goals.

The question obviously was if Barca would lose the grip in the second half the way they did in the semi-final.

They did not, but they actually looked to be on the way to do so, as Kielce managed to reduce the distance to only two goals at 31:29 with 14 minutes left.

This time, however, Barca managed to ride the storm.

Defending was still not really in fashion for either of the teams, but instead, we got plenty of good attacking play and lots of spectacular goals.

Kielce managed to reduce the deficit to three goals at the beginning of the second half, but Barca answered back by going six goals up before Kielce went within two goals again with 14 minutes left.

Barca proved their mettle and stormed ahead under Palmarsson’s guidance.

He might not have had that many goal-giving passes in the second half as before the break, but he certainly saved his team, when they were in trouble and short on players.

In that situation, the Icelandic took the matter in his own hands and made it 34:30 – a goal, which basically decided the matter.

At the end of the day, Kielce had to realise that they could not match Barca on the day.

Artsem Karalek did a good job again, but too few Kielce players were at their best and playmaker Luka Cindric definitely did not cause much harm to his future teammates.

“It was a difficult game to play due to many confusing situations and many confusing decisions from the referees, but I think we overcame any trouble well.

“Although I am sad we did not make it to the final, I am content that we at least won the bronze match.”

“I think it must have been a great game for the audience to watch, and I am proud of the performance we made.

“Of course, I am disappointed that we suffered another defeat and finished last, but you have to remember that Barca are a really great team and I am still proud of the way we fought and played.”