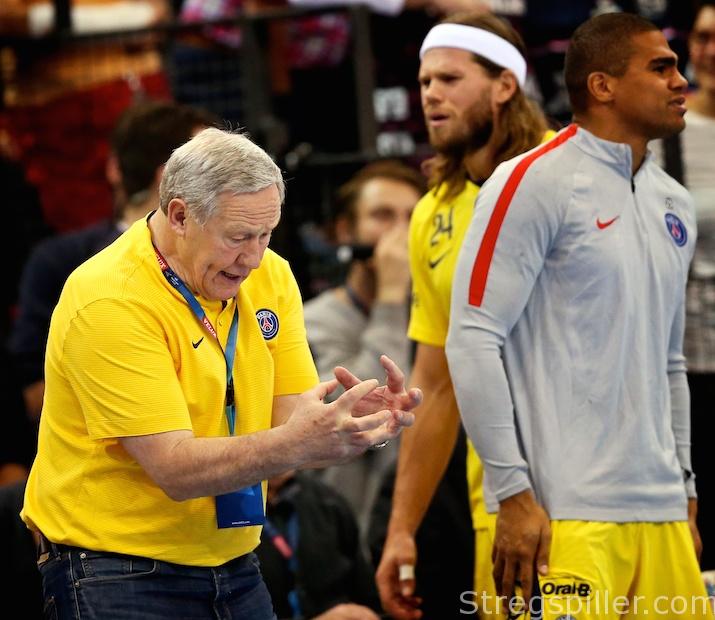 In the seventh round of the Men´s Champions League group phase, Paris Saint-Germain demonstrated what they are really capable of – finally.

The round also showcased an impressive and heroic effort from Rein-Neckar Löwen, and it provided at least one juicy surprise.

The top match in Group B between Paris and Veszprém became one of the best games this Champions League season.

Elsewhere – in Palau Blaugrana, we got a thriller between a well-rested Barcelona team and an amazing performance of Rhein-Neckar Löwen after a tough Bundesliga match just 24 hours earlier.

We also saw a couple of surprises, and we have to get used to the name Edouard Kempf.

Match of the Week Round 7

This game really deserved the title Match of the Week. It simply had everything a handball fan could wish for.

Frequently, PSG have been criticized – justifiably – for not living up to their entire potential, instead only doing what was necessary to win a match.

You may argue that they also just did what was absolutely necessary on Sunday evening against Veszprém, but that was a fantastic effort.

After dominating the first half, Paris were really put to the test by Veszprém in this top game of Group B, and without Luka Karabatic, Luc Abalo and Daniel Narcisse – all injured – they passed.

And who really misses Abalo, when you have such great right wings as Benout Kounkoud and Edouard Kempf?

Thierry Omeyer showed one of his better performances in goal and the match almost inevitably had to turn out the way it did.

On Veszprém’s side, it was a true surprise that William Accambray got to see plenty of court time.

Obviously, Veszprém’s coach, Ljubomir Vranjes, expected Accambray to be highly motivated against his former teammates. And Vranjes´ intuition was correct, but Accambray’s performance wasn’t enough to impact the result.

Match of the Week #2

What an effort from the Lions!

Just 24 hours after taking an impressive 29:23 road win against Leipzig in Germany’s Bundesliga, they were able to secure one point in one of the toughest arenas in Europe.  And at one point, they were even reaching for victory.

However, the circumstances surrounding Löwen´s heroic effort were sad, even tragic.

Forcing a team to play two important matches within a 24-hour period is not only ruthless exploitation of the players – it is damaging the sport of handball.

The people, who are responsible for such decisions, cannot possibly share the same love for handball, that so many of us feel.

“Naturally”, Nikolaj Jacobsen was playing seven-against-six most of the time, after being down 5:1 at the start.  The tactic was a success.

Rhein-Neckar Löwen were leading by four goals several times in the second half, before Barca caught up in the end.

Just as we thought Kiel´s troubles were over, it started again.

Certainly, it was not expected that Celje would take their first road win in the 2017/18 Champions League at Sparkassen Arena, nevertheless, that’s what happened.

Kiel were in control for the better part of 40 minutes, leading by three-goals most of the time.  But in the last 20 minutes of the game, it went downhill, and a 20:17 Kiel advantage changed into a 26:29 Celje lead.

Now, both teams have five points after seven matches in the group phase.  Kiel not even making it to the knockout rounds is no longer an unrealistic scenario.

We need to get used to this name.

This 19-year-old Frenchman certainly made himself known to the international handball public, this Sunday, in the Stade Pierre de Coubertin, in Paris.

With six goals on six attempts, he stood out in a match that saw a number of stellar individual performances.

No doubt we will see more of Kempf soon and there is plenty to look forward to.

This weekend marked the end of the first half of the group phase. But the show continues next weekend already, and one of the more interesting games will be the showdown at Jane Sandanski arena in Skopje, where the defending champions Vardar take on Rhein-Neckar Löwen.

Can Jacobsen´s men impress again? This time, they won´t even have to play another Bundesliga match 24 hours before entering the court in Macedonia.

Also, it will be interesting to see if Barcelona can keep up with the top when visiting Pick Szeged who seem to have hit a soft patch.

In Group B, Veszprém will not have to wait long to avenge the defeat in Paris.  PSG will be visiting Veszprem arena on Saturday.

And on Sunday, Kiel will get their chance for revenge in Celje.  Another defeat will throw Kiel deeper into crisis, once again.