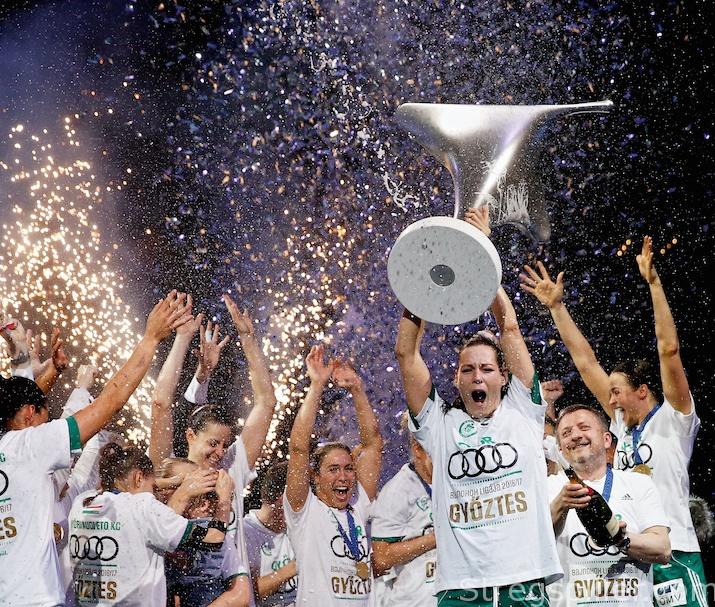 “I play where I make a difference”

INTERVIEW – Anita Görbicz finds that her new role as left wing – after many years as playmaker – has made her more valuable to Györ.

In this exclusive interview with stregspiller.com, she also talks about her team’s injury problems this season, losing two matches in succession and working with foreign coaches.

You cannot teach an “old dog new tricks”, as the saying goes.  Well, it would be an insult to call Anita Görbics “old”, at the age of 34 she continues to play handball at the very top level.

Still, the elegant Hungarian international has adjusted very well to playing on left wing, following her many years as playmaker.

“I play where I can help my team, and where the coach puts me.

“Before this season, we talked about it and that my role would be more on the wing, which I accepted.

“But as you can see, I can still execute the playmaker position.  Now, I have two positions, where I can be dangerous and score goals for my team,” explains Anita Görbicz, who is one of the few elite players, who have stayed loyal to one and the same club during her entire career.

For Görbicz, there has never been any other club than Györ.  Offers from others did not tempt her and only injuries and maternity leave have kept her away from the team in between.

She admits that the first part of the 2017/18 season has been a bit more troublesome than the ruling Champions League winners would have liked.

Recently, Györ recorded two defeats in succession, which is definitely not something that happens every year given the ambitions of the club.

First, they lost 23:22 on the road against Rostov-Don in the Champions League, and thereafter – even worse – they had to surrender 27:25 to their eternal rivals in the Hungarian league, FTC.

Numerous injuries have played a big part in Györ´s somewhat shaky start to the season.

“Unfortunately, there have been several injuries that affected our team, and it made our season difficult, so far.

“(Nycke) Groot, (Zuzsanna) Tomori, (Jana) Knedlikova and (Anne Mette) Hansen are all out, and I believe that any team would feel it, if they were missing four such important players.

“However, those of us who are fit are even more dedicated to winning. We have had some really good training sessions, where everybody is giving 120%, and it’s reflected in our performances in the games.

“Yes, we did lose in Rostov and against Ferencvaros in the Hungarian championship, but those are defeats, we will possibly be able to repair later,” she finds.

“The positive thing about the injuries is that our team spirit, which has already been very good and strong, has become much, much stronger.

“This can compensate for some of the absentees, and as we saw in our home game against Rostov, it can win games for us,” she says.

Nationality does not matter

It is no exaggeration to characterize Anita Görbicz as one of the greatest personalities in Hungarian handball in recent years, on the club- as well as national team level.  Yet, her coaches are all foreigners.

In Györ, Spaniard, Ambros Martín, has been in charge since 2012, when he replaced the late Norwegian, Karl Erik Bøhn.  And in the national team, Görbicz plays and trains under Kim Rasmussen (Denmark).

What is it like for a Hungarian player to work exclusively with foreign coaches?

“To me, it is not a matter of nationality.

“For instance, Ambros and I have known each other for very long and have worked together successfully.

“Kim also is a good coach who has already taught me many good things.

“You see, I am a winner type, and both coaches are the same.

“If you want to be successful, it does not matter, where you come from or where your coach comes from.

“It is more important that you do everything to reach the common goal,” she says.

The team everyone wants to beat

The most important objective for Györ this season is succeeding in the Champions League once again.

The team from Hungary´s sixth largest city got back on the European throne in 2017 after winning a thrilling final against Vardar. Obviously, the injuries will make it harder for the Hungarian champions to repeat the triumph but Görbicz sees other hurdles as well.

“We do have a chance to win again, that is true, but since we are the title holders, we are the team everybody wants to beat.

“The season is long, and it is really difficult to make certain predictions.  But I do think that we will at least reach the FINAL4, and once we are there, we will want to win it all.

“However, there are other good teams with the same objective, like Rostov, Vardar and Bucharest.

“It will not be easy for any team to win the trophy this season,” says Anita Görbicz who has another big event coming up before.

In a few weeks´ time, she and the rest of the Hungarian national team will be playing at the World Championship in Germany.

After having their 2016 European championship dreams more or less ruined by injuries, the Hungarians are hungry for success this time.  Still, Anita Görbicz remains cautious.

“We ended up in a strong group, but I see potential in our team.

“Our coach (Kim Rasmussen ed.) is a great motivator who is able to bring out the best in us.  If only we believe in ourselves, I think we can reach a nice result,” she expects.

Not sure when it ends

Normally, it is not polite to reveal a woman´s age or ask her about it.  In the case of top athletes, however, age is no secret.  A couple of years ago, she became a mother – so it’s only natural if she is thinking about ending her long and successful career as a player soon.

“My current contract with the club runs until next season – so, I will keep on playing until the summer of 2019, at least. Thereafter – who knows?” says Anita Görbicz.