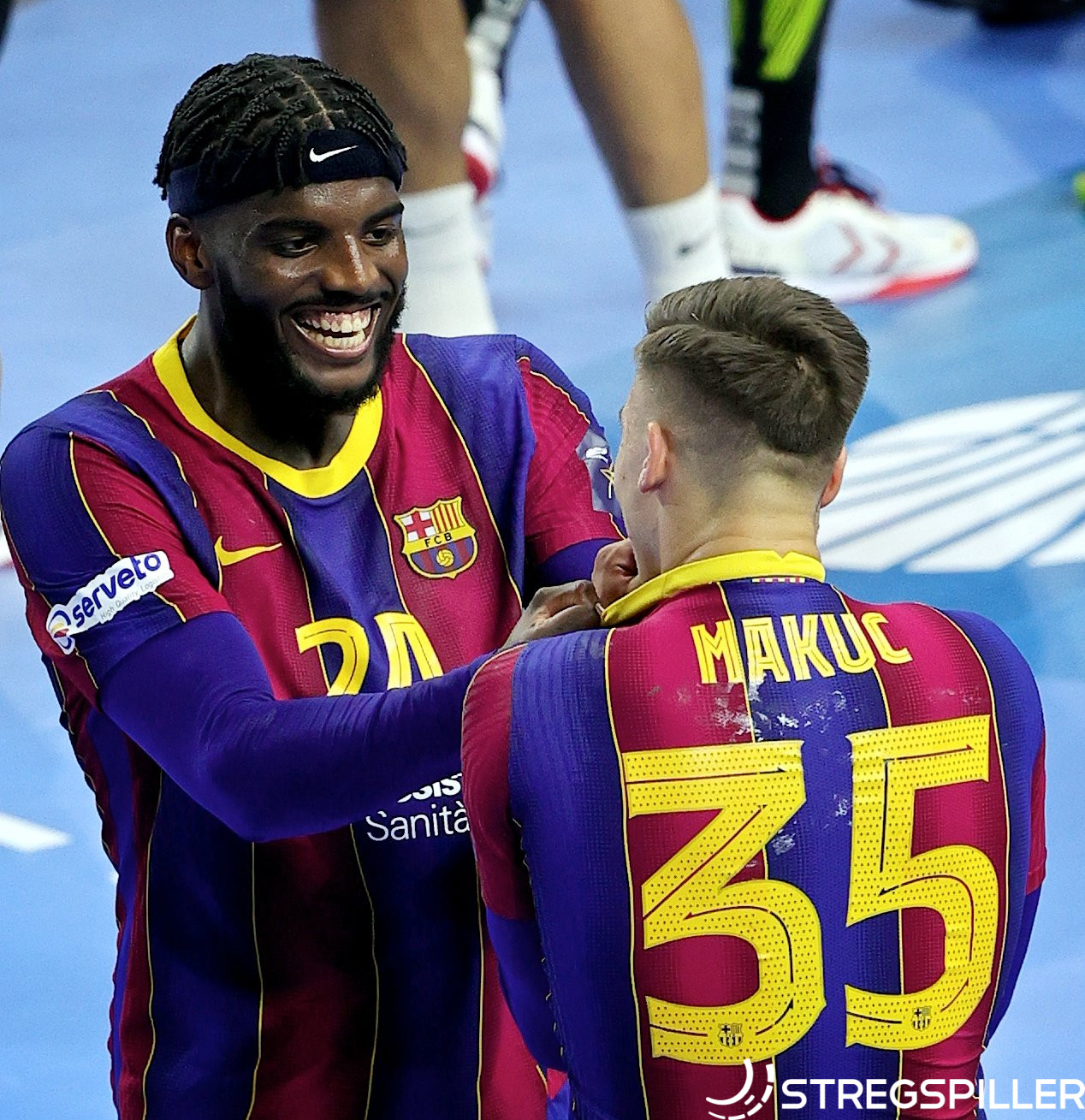 There was no shock result in the second semi-final on Saturday evening in Cologne as Barça held their nerve through a tense middle phase of the second half to break clear and claim a spot in the final against Aalborg.

Coach Xavi Pascual – 8
Accounted for the loss of Palmarsson well as he trusted the rest of his back court to play their part. Fully rotated the squad in the first half to ensure everyone would be ready if called upon in the second and set plenty of traps in his defence for Nantes to fall in to.

Gonzalo Perez de Vargas – 9
Three huge saves in the opening six minutes, setting the tone for his side and remained consistent throughout. Didn’t gift Nantes any easy goals and a pair of saves leading to empty net goals at the other end sealed the victory for his side. 16 saves at 39% in a match winning performance.

Domen Makuc – 8
Made an immediate impact after coming on with a long range goal and never looked back. A player designed for this club’s future was needed here and now and he delivered with some incredibly smart play and confident shooting.

Thiagus Petrus – 8
After struggling to make an impact at times in the first half, the Brazillian defensive specialist was much stronger in the second half, alongside Fabregas, shutting down Nantes’ attack down the middle and cutting out their easy outlet on the line.

Ludovic Fabregas – 7
Plays such a vital role at both ends of the court for this team. He was stuck in the first half, particularly in attack, where he was being torn apart by Nantes on the line and denied by Nielsen but eventually began to find space and exploited it well.

Dika Mem – 7
Looked on fire early on before Nielsen began to read him. Came back on after a rest and looked on the ball again, winning penalties, providing four assists and adding an important fifth goal to make it 20:17 midway through the second half.

Raul Entrerrios – 7
Played a lot more than we would have expected if Palmarsson were fit and rose to the occassion. Played the ball calmly and always made the right decisions, while also playing a solid role on the left side of defence.

Aleix Gomez – 7
Not a classic scoring performance from the right wing but he did come up against a great keeper today. Scored a vital goal to regain the lead in the second half after neither side could score for six minutes, sparking Barcelona’s run to victory.

Timothey N’Guessan – 6
Put in a very solid if unspectacular shift for the team, scoring the odd goal and got stuck in with his defensive duties, even recording a block.

Luka Cindric – 6
Had the attack running smoothly. Left frustrated in the first half as no call went his way and some other referees may have given him some penalties. Scored one of his trademark goals late on but was not at his best by any means.

Casper Mortensen – 6
Was left fairly isolated on the wing but took the one chance he got in the first half. Given a few more chances in the second but delivered a mixed bag of shots and decisions in counter-attack situations.

Jure Dolenec – 6
Scored a trademark running shot but besides that played it safe and unspectacular in the first half. His role in the second was to come on and take penalties, which he did to perfection with 3 from 3.

Blaz Janc – 5
Scored one but didn’t have much more of a positive impact in his first half cameo. A turnover for travelling and an accidental trip leading to a suspension were his less fabulous highlights.

Cedric Sorhaindo – 5
Came in and shored up the centre of the Barcelona defence late in the first half when things were not working for them but was not required in the second.

Luis Frade – 5
Did well to score his goal as he showed his quick thinking and skill but followed that up with a pair of misses and was not given another opportunity.

Alex Pascual – 4
Came on late in the first half and was offered one glorious opportunity on the left wing but he read like a book by Nielsen, who make a comfortable save down low.

Coach Alberto Entrerrios – 6
His side lost the game in attack today and it is difficult to know what he could have done about it. With Cavalcanti and Briet misfiring, he needed to reshuffle his back court, which worked for a while, but soft turnovers and going 7vs6 in desperation during the second half proved to be their undoing.

Emil Nielsen – 9
Quite simply, he kept Nantes in this semi-final. Having won the goalkeeper battle in the first half, a hattrick of huge point-blank saves early in the second looked to have turned the tide in his team’s favour. Despite delivering until the very end, his team could not get it done at the other end.

Theo Monar – 8
Missed a sitter shortly after coming on but made up for it with a brilliant counter attack finish and that got the ball rolling for him. You cannot help but enjoy watching him play at both ends of the court. Looked right at home at this level and I’m certain it won’t be the last time he’s there.

David Balaguer – 7
The ball didn’t come out to him often enough today, which is a pity because he was in perfect form when it did. Caught out a couple of times in defence, perhaps due to the team’s style more than anything.

Dragan Pechmalbec – 7
Lived on the edge in defence and was finally punished with a suspension after 21 minutes. Did almost everything right when he got his hands on the ball on the line but those occasions became few and far between in the second half.

Kiril Lazarov – 6
Some gorgeous balls into the line and selected his shots well. Didn’t try to overdo it today, though that may not have been a bad idea in the second half when nothing was happening for his teammates

Eduardo Gurbindo – 6
Smart on the ball, as always, but lacking a bit of power in his shooting. Silky movement and good passing were his main contributions today.

Rock Feliho – 6
Did everything he could to keep Barcelona at bay and it worked beautifully for 45 minutes. You cannot fault his output, even if like Pechmalbec, he went over the top at times.

Baptiste Damatrin – 6
Ran hard after he came on late in the first half but didn’t see much action before he scored with no angle right before the half-time buzzer.

Rok Ovnicek – 6
Always on the move, probing the defence and setting up scoring chances. Enjoyed a lot more success in the first half but Barcelona had him figured out somewhat after the break.

Valero Rivera – 5
Perez de Vargas got the better of him in the first half, saving two good chances on the left wing. Perfect shooting from the penalty line but two goals from six on the wing is not enough for such a relied upon figure in the team.

Thibaut Briet – 4
Really got stuck in at the defensive end, engaging a battle with Barcelona’s line players. Made some good plays in attack but his shooting was way off, which is a pity based on what we’ve seen from him this season.

Aymeric Minne – 4
Could never really find his groove today. Combined well with Ovnikcek in the first half but he was unable to get himself into the shooting positions which really bring results.

Alexandre Cavalcanti – 3
Took on three early shots, well saved by Perez de Vargas which appeared to dent his confidence. Played a nice assist before dropping the ball on the run and was brought off early. It was much of the same in the second half and although he scored a pair of late goals, he was off the mark.