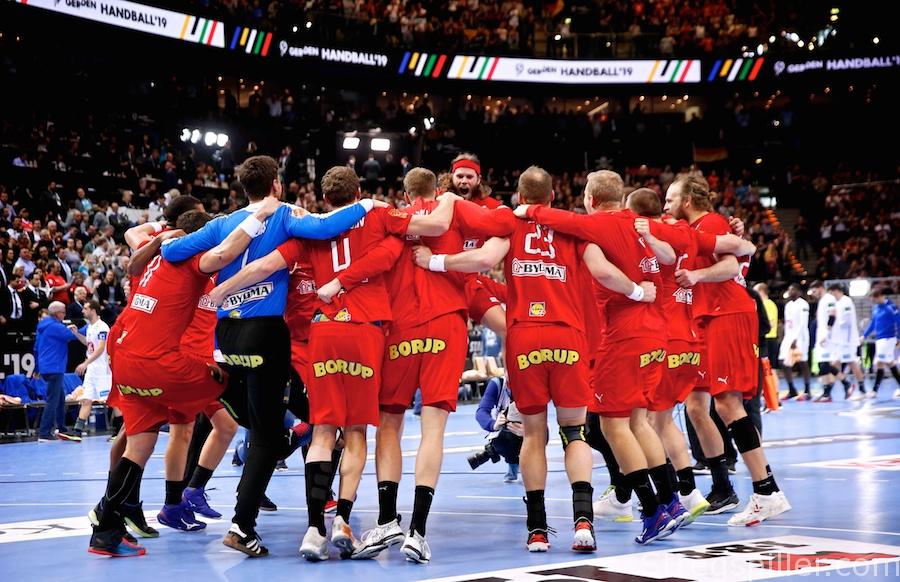 Denmark roared their way into the World Championship 2019 final by demolishing France’s defence in a 38:30 victory. The result was beyond doubt after a free-for-all in the first half and Denmark delivered their best performance of the championship to date.

Coach: Nikolaj Jacobsen – 8
Knew what was required to beat France and put out the right team to do the job. Putting Green in goal helped make the second half a piece of cake. Only criticism is that he could have made some changes and given players a run out in the final quarter with the result in the bag.

Mikkel Hansen – 10
Showed he meant business immediately with a fine goal and two even better assists in the first five minutes. Dishing tasty passes around the court and scoring whenever he liked, Hansen had the perfect attacking game and made his 12-goal haul look easy.

Rasmus Lauge – 8
Overshadowed by the phenomenal Hansen performance, but Lauge played a huge part in the win by scoring more than his fair share of goals and did some heavy lifting in defence.

Morten Olsen – 8
Sidearm shooting machine. Played wherever he was needed, mostly at right back, and not only did he fill in but he made things happen. Almost doubled his total for the tournament with five goals today.

Anders Zachariassen – 8
Put in a fine shift at both ends of the court. Great movement on the line and created plenty of opportunities for himself, all five of which he scored.

Jannick Green – 7
In a match for goalkeepers to forget, Green emerged as the best of the four on show. Came in with five minutes left in the first half and produced a solid second half with a 33% save rate.

Magnus Landin – 7
Completely reliable when called upon to finish chances from the wing and did a fine job at left back in defence, constantly frustrating France’s left-handers.

Lasse Svan – 7
Four goals from four attempts on the right wing, what more can you ask from him?

Mads Mensah – 5
Filled in at right back and kept the ball moving, without offering too much, safe in the knowledge he had Hansen and Lauge alongside him.

Henrik Toft – 5
Not his best match, but gave it his all for the 20-odd minutes he was on court and popped up with a goal.

Niklas Landin – 4
Set the tone for Denmark with a pair of saves to open the match, but that was as good as it got for Landin as the first half turned into a free-for-all. A pair of empty-net goals bumps his score up a bit.

Henrik Møllgaard – 4
Caught out a bit too easily in defence early on, giving away two goals. Found it tough at times against the athletic left side of France’s attack and a defensive specialist is never going to come across too well from a goal-fest like this.

Coach Didier Dinart – 4
He tried to find a solution, but nothing worked. Brought Mahé off halfway through the first half when he seemed to be the only driving force in attack.

Kentin Mahé – 8
Ran the show in attack for France in the first half and made goals happen when there didn’t appear to be an opportunity. His versatility counted against him as he was first shifted out to left back, then benched until thrown back in on the left wing in the second half, where he did everything possible to be involved.

Melvyn Richardson – 8
As he has done since joining the squad, put on an almost perfect shooting display and was France’s best attacker in the second half with six goals and six assists.

Ludovic Fabregas – 6
Ended up playing the most of any French player and he never gave up a lost cause.

Timothey N’Guessan – 6
Slow start to the game, but began to find his attacking lines and found joy against the Danish defence. Overall, a decent performance but his team needed more.

Romain Lagarde – 5
Scored immediately after coming on in the final five minutes of the first half and was involved a lot in the 10 minutes he played, scoring three.

Michaël Guigou – 4
Just one chance to score and he took it. Pushed the fast break any chance he could, but once again he and his fellow wings did not have much to play with.

Nedim Remili – 4
Tried hard, but found very little joy. In a relatively even second half, he had to watch much of the action take place on the opposite side of the court.

Valentin Porte – 3
As expected, not given much service on the right wing, but battled for everything on both ends of the court. Had one chance from the wing and it was saved.

Luc Abalo – 3
Much like his fellow lefties, not much joy in attack today. Scored a nice fast break, but fairly anonymous besides that.

Luka Karabatic – 3
Terrorised by the Danish attack. He and his fellow defenders gave the opposition far too much room to play with and were punished over and over again.

Nikola Karabatic – 3
Tried to help however he could in attack and defence in the second half, but soon realised there wasn’t much he could do today.

Cyril Dumoulin – 3
Second best save rate in the match with 17%, but that’s not saying much. Had a couple of bright moments in an otherwise quiet game, but received almost no help from his defence.

Dika Mem – 2
Day to forget for Mem, missing all but one of his six chances and looked out of sorts. A very soft attacking foul in the first half summed up his day.

Mathieu Grebille – 2
Brought in on the left wing in the second half, missed a shot, off again.

Adrian Dipanda – 2
Only played nine minutes in a defence which conceded 38, not much to write home about.

Vincent Gerard – 1
Struggled to get a hand on anything in the first half and with Denmark scoring 14 in 21 minutes, he was replaced by Dumoulin. Got a second chance and it was more of the same. No saves from 16 shots makes this a day to forget for a wonderful goalkeeper.