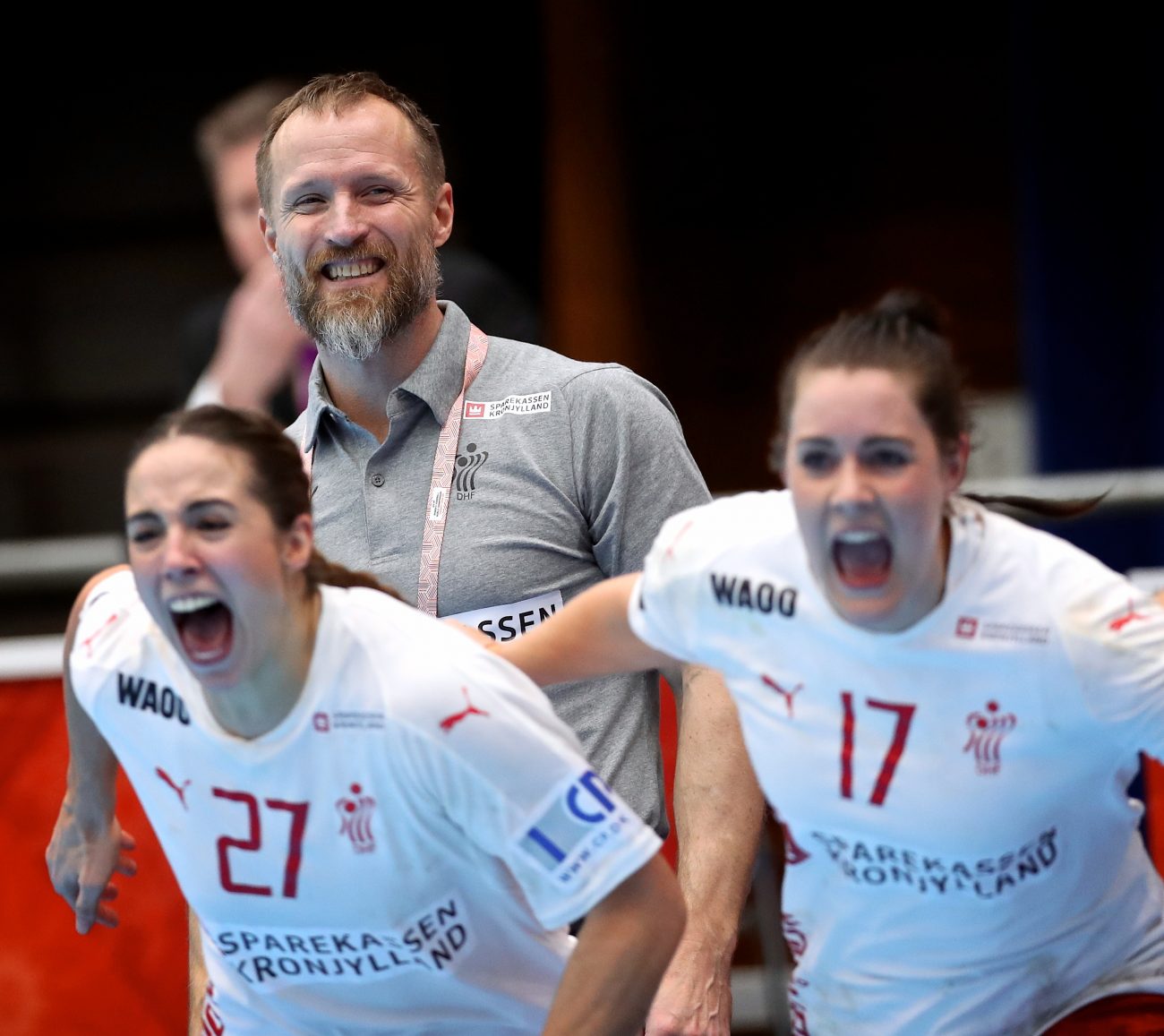 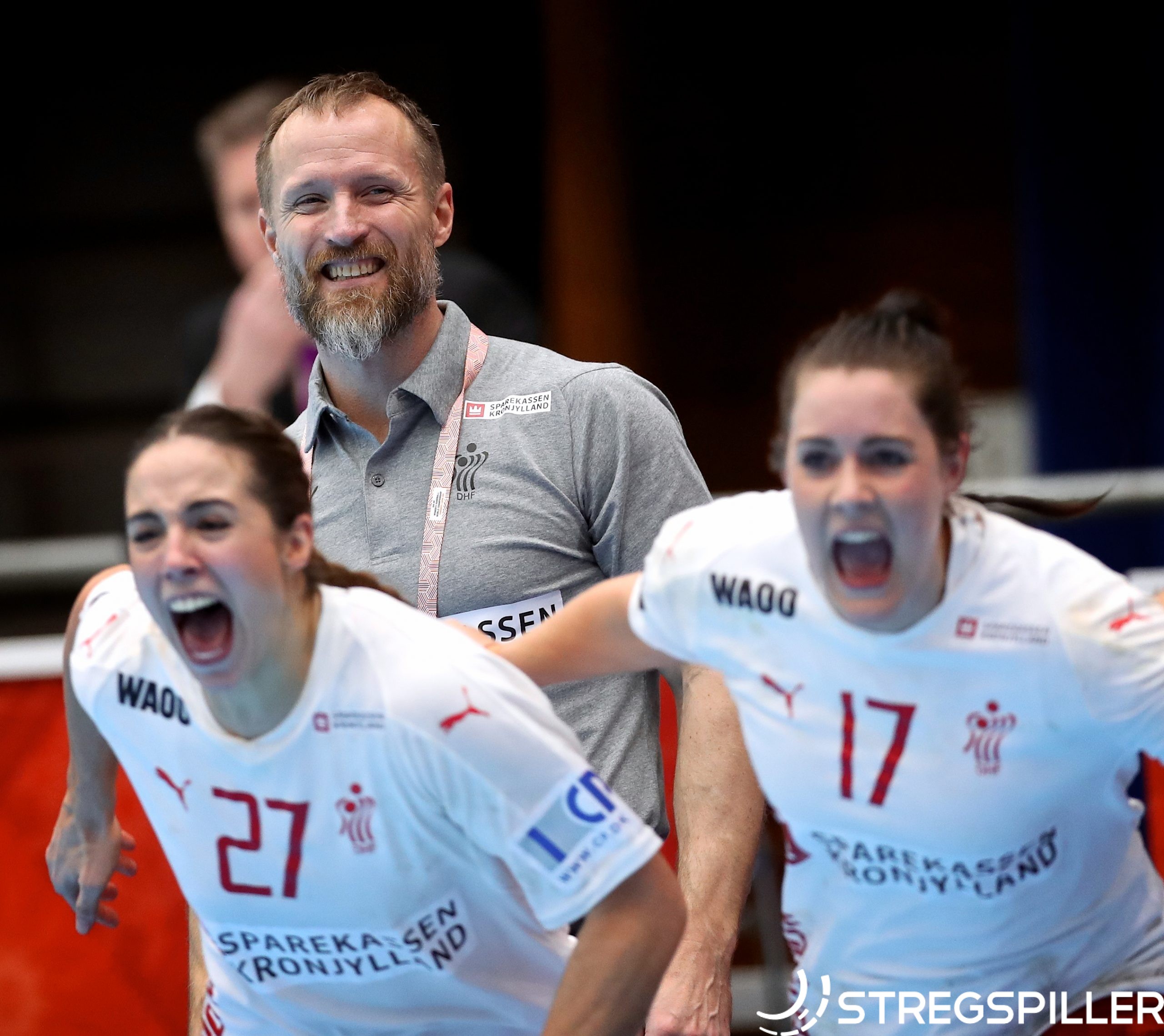 In a do-or-die battle, it was Denmark who prevailed to survive Group B and progress to the main round with a deserved 20:18 win. Japan 2019’s group of death claimed its biggest casualty in the form of defending champions France, who must now face the ignominy of the President’s Cup on Sunday.

His job may have been on the line today and he responded brilliantly. Set up his team very well, particularly in defence, to counter France’s strengths. You could see from the players he used that he had a very precise plan in mind and stuck to it. Seemed to make his feelings felt very quickly at half-time as the whole squad were back out on court, warming up again eight minutes early, and his players delivered a confident second-half performance.

On fire in the opening exchanges, only letting a penalty past her in the opening 9 minutes, and continued her brilliance throughout. Some of the saves were truly awesome and prove what a special keeper Toft is. She said she didn’t fully believe they could beat France, but the Brest Bretagne shot-stopper took fate into her own hands and made it happen with 15 saves and a 47% save rate.

Cometh the hour, cometh Anne Mette Hansen. Wasn’t having the best of days in the first half, with her shooting a bit off, but she just never quits. Played in all three back court positions, created chances for others, put in a barrage of hits in defence and then came to life in the final 10 minutes with three awesome goals to send Denmark on their way.

Haugsted’s performance as a defensive specialist for this team cannot be underestimated. She put in a solid performance in the centre of defence throughout the match and played a big part in restricting a deadly collection of back court players to just eight goals from open play.

Denmark desperately needed a shooter and Stine stepped up when called upon late in the first half. Cool from the penalty line and always seemed to be on hand to score when required.

Troubled the French defence as a right-hander at right back, winning penalties and setting up space for Østergaard on the wing. Used exclusively in defence in the second half and did well before coming off following a heavy hit to the head.

In a first half where there wasn’t much happening for the Danish back court, there were chances being created for the wings and the 23-year-old delivered with three good finishes. Quieter in the second half, but did exactly what was required of her.

Much like Nolsøe on the other wing, Trine was needed to put away her chances in the first half and did exactly that. Hard-working throughout the match at both ends and gave Manon Houette very little to work with.

Created space for herself on the line very well, but couldn’t find the back of the net. Played well against the tough French defence in a tense first half and played her part in defence more effectively.

Came into the game late in the first half and found it difficult to get her hands on the ball on the line, but did more than her fair share off the ball and in defence.

Came in at half-time in attack only and was full of energy. Gave a nice balance to the attack and always looked to be dangerous, but her shooting was not up to scratch today with one goal from four attempts.

She was given the start at centre back in attack and while she looked to control the game, there wasn’t enough to threaten the French defence. A pair of turnovers saw her given the hook midway through the first half.

Threw on the young back court players when 5:2 down and they paid him in return with three immediate goals, but this tactic only worked for so long. His willingness to rotate the bench at a moment’s notice backfired on this occasion, particularly in the final stages, where more experienced heads were needed.

Not much of a presence in attack, but her defensive work was noteworthy. A huge block late in the day could have proven to be a gamechanger, but good defence was not enough.

Perfect from the penalty line with six goals, some of which were gorgeous, but not much else to report from the right back today.

One of the best players for France today. Scored two quick goals after her introduction midway through the first half to breathe some life into her team. Her shooting failed her afterwards, but Nocandy provided three assists and was good value for her court time.

Made some good saves early on, but struggled against Denmark’s wings and couldn’t make an impact in the second half. The usually brilliant fast break passes just weren’t connecting today.

Solid work in defence again from Pineau. Conceding just 20 goals is a fine day’s work and she played a big part in it, even though she was exposed a bit in the second half.

Made an immediate impact when she came on to give France a much-needed goal. When she scores, it’s spectacular, you sit up and take notice. Unfortunately, those moments were few and far between in her 24-minute spell.

Came on for 10 minutes to provide a break for Edwige and missed her only chance of the game.

Came on for a while in the first half and scored her only chance from the wing.

Two goals from seven shots in 18 minutes is costly for a right back, but at least she was taking the shots. Gave France their final moment of hope as she cut the deficit to one goal in the final minute.

Uncharacteristically threw the ball away a couple of times in opening minutes and couldn’t really put it behind her. Two goals from six shots and three turnovers are not the stats France could afford from Zaadi today.

On for half the match, but completely unable to get involved in attack. Got herself two two-minute suspensions, one of which was a soft call.

Seemingly short on confidence, which led to indecisiveness at times in attack and fairly poor shooting did not help her cause.

Somehow got herself two two-minute suspensions in the opening 11 minutes, the second for what appeared to be an accidental football. Provided a couple of assists, but no further action in front of goal.

Not Houette’s day today. Two goals from four attempts is not great from the wing and a couple of missed opportunities on fast breaks were the biggest surprise from the usually consistent wing.