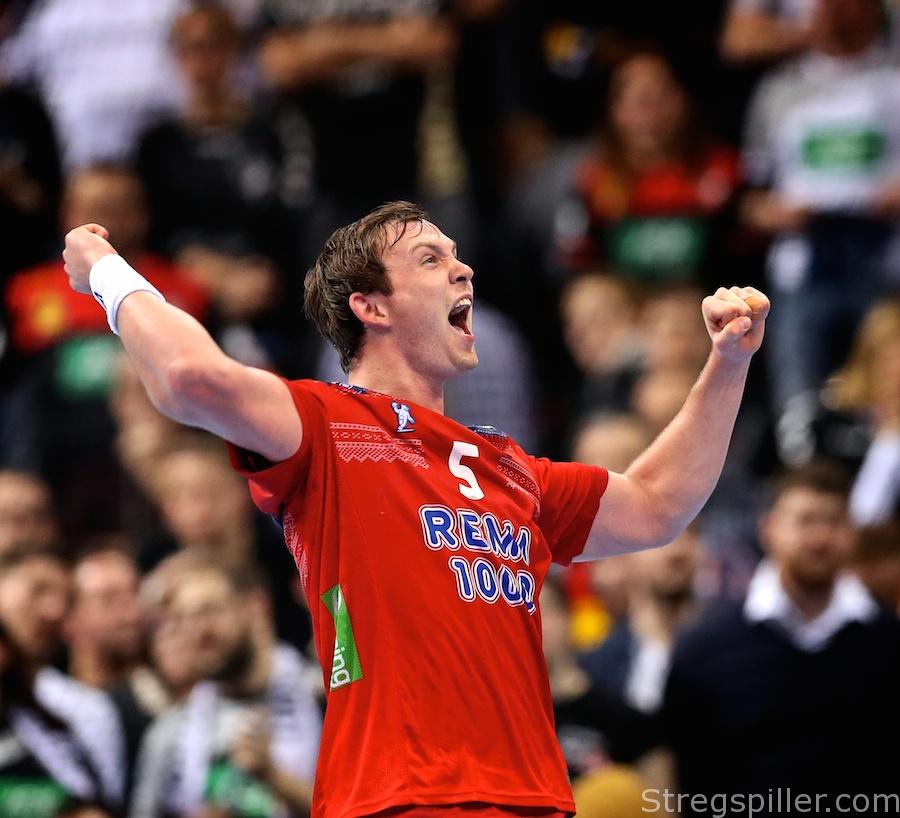 Germany’s dream run to the World Championship final was torn apart by a smooth and smart Norwegian side on Friday night. Norway looked in control for most of the match and set up a Scandinavian derby for Sunday’s final with a 31:25 win.

Coach Christian Prokop – 5
His side went out to destroy Norway, instead of play the strong and smart defence which had served them so well to date. Goalkeeper switches were puzzling and he was not able to give his attack new ideas in the final quarter.

Fabian Böhm – 8
Came on for Fäth and took his chances immediately with two first-half goals. Kept his team in the game early in the second when Norway looked set to pull away and kept banging in the goals with every decent chance he had.

Uwe Gensheimer – 8
Got the party started with a well-taken opening goal and scored all his penalties well. Silly two-minute suspension, which could well have been a direct red, handed the momentum back Norway’s way late in the first half. Feeling inspired, he scored a pair of no-angle goals in the second half.

Fabian Wiede – 7
Continued his good goalscoring form, but throwing the ball away when two men up in attack in the first half was costly. Better in the second half, with some fine goals and six assists, but couldn’t fire in a goal in the crucial final stages.

Patrick Wiencek – 6
Hyper-aggressive in defence, setting the tone for his pals who went over the top a few times. Incredibly he did not receive any suspensions himself. Made some nice blocks and played good defence when in control.

Patrick Groetzki – 6
Took his two chances well and got involved as much as possible, without much joy.

Tim Suton – 5
His bold attacking backfired immediately after coming on but proved useful soon after by forcing two Norwegian two-minute suspensions in quick succession. Brought on again in the second half, but by then the Norwegians had him figured out.

Jannik Kohlbacher – 5
Scored a tremendous goal, but that was all we saw of him with the ball. Struggled a bit in defence as Rød enjoyed enormous success on his side and he received a pair of suspensions.

Matthias Musche – 5
Came on at the end of the first period and scored a penalty.

Paul Drux – 4
Had a bright start and scored early, but got somewhat lost in the game after his two-minute suspension. Offered very little in his 27 minutes.

Hendrik Pekeler – 4
His red card in the 44th minute came way too early for him and his team, a casualty of Germany’s over-aggressive approach to defence today.

Finn Lemke – 4
Only really used after the Pekeler red card and didn’t make much of an impact in defence.

Andreas Wolff – 4
Wasn’t doing too badly before he was brought off in the first half and in the end made more saves than his goalkeeping partner. Underperformed compared to what he has produced so far in this championship and it showed.

Silvio Heinevetter – 3
Brought on in both halves as a sort of impact sub and while he made a couple of great saves, they were the only couple he saved. 11% save rate in a big game sums up his January so far.

Kai Häfner – 3
Given an early opportunity after a Drux suspension and tried too hard to force something to happen with two missed shots.

Steffen Fäth – 2
Disaster for the man who was Germany’s top-scoring back court player coming into the match. Struggled from the beginning with no luck from four attempts. Had a brief second chance in the second half, but didn’t look like he was up to the task.

Coach Christian Berge – 9
Had a plan and stuck to it, regardless of what Germany threw at his players. While the relentless speed didn’t quite work in the first half, they knew it would punish Germany eventually. His defence adapted quickly to Germany’s back court threats and limited them to just two goals on the line.

Sander Sagosen – 9
Knew he would be a target for the German defence and did well to bide his time with some nice assists before scoring a crucial goal after 21 minutes. He took control in the second half, feeding Myrhol with a plethora of balls on the line and scored six himself, brilliantly slipping through the centre of defence on a few occasions.

Magnus Rød – 9
With all of Germany’s early focus on beating up Sagosen and O’Sullivan, Rød took full advantage with three goals and that was only the beginning. He produced big goals time and time again and top scored with seven. Sadly came off injured in the final 10 minutes, time will tell how serious it is.

Bjarte Myrhol – 9
Exploded in the second half when space began to open up for him and scored six goals. His excellent movement and battling spirit saw him tear through the usually watertight German defence.

Magnus Gullerud – 8
Anchored the defence brilliantly and ran well on fast breaks in the first half. Helped ensure nothing was going in to the usually well-fed line players.

Christian O’Sullivan – 8
Had a huge impact in attack, controlling the play throughout his 40 minutes and created space for so many shooting chances with simple and smart play. Very solid performance in defence as well.

Magnus Jøndal – 6
Had a pair of usually 100% wing shots saved in the first half, but held his nerve from the penalty line. Quieter second half on the wing, but scored when he had the chance.

Kristjan Bjørnsen – 6
Very similar to Jøndal. A busy man in the first half, where he missed a couple of decent chances and was fairly quiet in the second half as the central diamond took over.

Gøran Johannessen – 6
Offered something very different in the playmaker position and posed a more obvious goalscoring threat. Came in and scored immediately in the 19th minute, pity not to see him a bit more in the second half.

Torbjørn Bergerud – 6
He’s had both better and worse days at this championship, but he made good stops when it mattered most, denying a few long-range shots in the final stages.

Eivind Tangen – 6
Came in late after Rød’s injury and did well with a goal and an assist.

Petter Øverby – 6
Made his presence felt when he came in on defence, stopping the back court in their tracks on a few occasions.

Espen Lie Hansen – 4
Only used for a few minutes in defence before receiving a two-minute suspension.

Espen Christiansen – 2
Only had 10 minutes to make an impact and was unable to, conceding all seven shots which came his way.