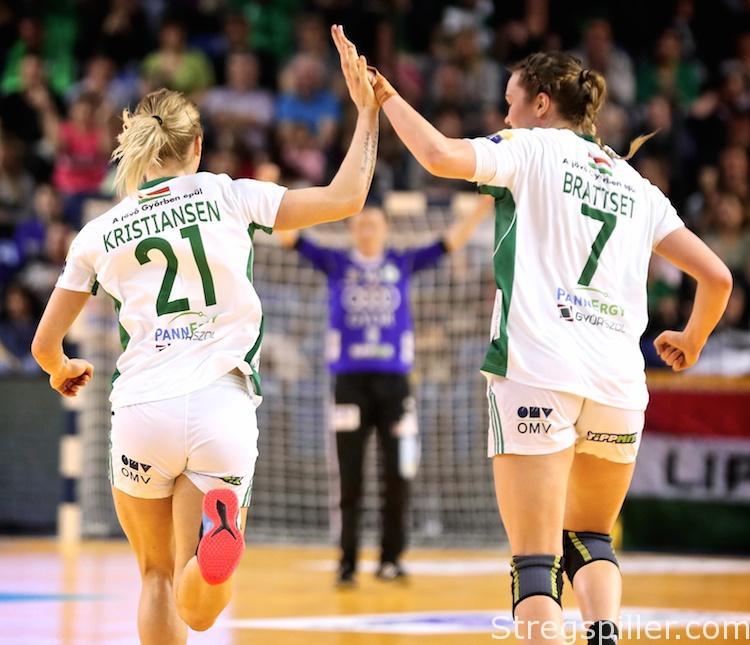 Györ won the first Hungarian trophy of 2019 after beating FTC 32:29 in Sunday’s final of the Magyar Kupa in Debrecen,

Coach Gábor Danyi – 8
Adapted the game plan well enough, compared to the previous two meetings, to dominate the early stages. No surprise he called a timeout when he did, once FTC equalised in the second half, but it made a big impact and changed the course of the game.

Nycke Groot – 9
She is some player for the big occasions. Instrumental in building Györ’s lead at the beginning and again towards the end of the match. It doesn’t matter where she plays in the back court, she is a nightmare for the opposition to deal with and she gives as good as she gets in defence as well.

Amandine Leynaud – 8
Really set the tone at the beginning with six solid saves in the first quarter-hour, not conceding a goal until the seventh minute. Less dominant in the second half, but still popped up with big stops at crucial moments.

Stine Oftedal – 8
A great display of leadership in attach, typified when she took it upon herself to find a goal to break a 4:0 run for FTC in the second half. Squeezed between the defence when needed, scoring or winning penalties, and played sweet balls into the line.

Eduarda Amorim – 8
Played throughout the match, either at left back as a defensive specialist, and proved she is well and truly back from injury. So very strong in the middle of defence and a constant threat in attack.

Kari Brattset – 7
Anchored the defence brilliantly with Amorim and was very comfortable going beyond 9 metres to stifle the opposition attack. Her shooting suffered a bit in the second half, but regained her form when it mattered most.

Veronica Kristiansen – 7
A brilliant first half, where she defended very well and scored three counter-attack goals. Exposed a bit in the second half as FTC began to claw their way back, but overall a solid defensive shift.

Anita Görbicz – 6
Fairly quiet on the left wing, but maintained her composure with every penalty she scored and set up a wonderful in-flight goal during a tense period of the second half. Worked non-stop at both ends of the court.

Jana Knedlikova – 6
Very busy in the opening stages, scoring a couple of goals, but like her opposite wing, it was generally a hard-working but quiet day at the office.

Crina Pintea – 6
Didn’t have too much time on court today, but took her chance in front of goal when it came to her.

Zsuzsanna Tomori – 5
Featured late in the first half and filled in at right back, without making too much of an impact.

Coach Gábor Elek – 6
Didn’t have much joy with his tactical changes in the first half, but whatever he said at half-time worked wonders. However, I cannot understand why Nerea Pena was brought off in the crucial final stages after she dragged FTC back into the game.

Nerea Pena – 8
Controlled the attack well when moved into the playmaker role in the second half and scored five of FTC’s 10 goals in the comeback. Unfortunately didn’t feature in the final 10 minutes when she was needed.

Nadine Schatzl – 7
Scored Fradi’s first goal of the match in the seventh minute and was probably FTC’s best player in the first half, scoring three. Quieter second half as the back court took over.

Noémi Háfra – 7
Had no joy in the first half until her first goal in the 29th minute. Grew into the game in the second half and displayed some of the brilliance she is quickly becoming known for.

Katrin Klujber – 7
Fearless attacking from the young right back, who made an impact shortly after being introduced. One of the more efficient shooters for FTC with her four goals.

Blanka Bíró – 7
Two saves from 15 shots before she was given the hook in the 20th minute, but came back a completely different player in the second half, providing the platform for FTC’s comeback.

Anikó Kovacsics – 6
No shortage of effort from the playmaker as she fought throughout. Was unable to make the right impact early on, but improved greatly in the second, scoring a couple of great goals.

Kinga Klivinyi – 6
Did what few of her backcourt teammates were able to in the first half – beat the defence one against one. Functioned well as a backup, when needed, but could have produced more.

Dorottya Faluvégi – 6
Did what was asked of her with two goals from as many shots, but not overly active in the game.

Noémi Pásztor – 5
Received a two-minute suspension at a crucial stage of the match and despite scoring a goal, she was not involved enough in attack.

Rea Réka Mészáros – 5
Heavily involved in the early stages, but much like her fellow line player, her involvement was more about accommodating her back court.

Melinda Szikora – 4
Was given a chance towards the end of the first half, but was unable to stem the flow of Györ goals.

Dóra Horváth – 4
Got an early two-minute suspension after being toyed with by the Györ back court and gave the ball away on a potential fast break, which summed up FTC’s first half.

Viktória Lukács – 4
Started the match, but missed a couple of chances early on and was soon replaced.