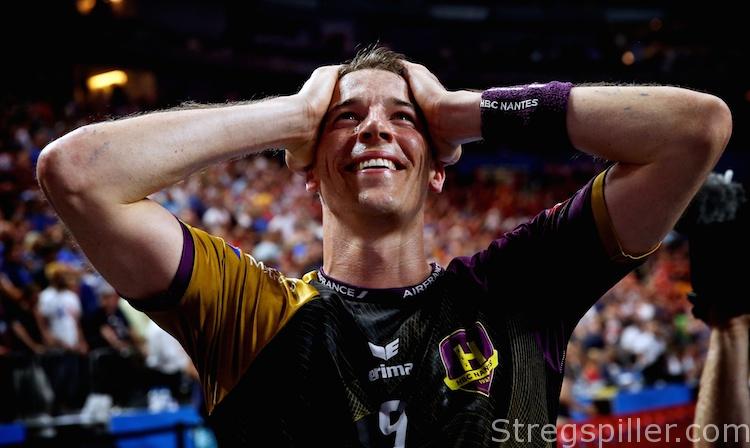 Following HBC Nantes’ superb 32:28 victory over PSG in the all-French semi-final at the VELUX EHF FINAL4, here are the ratings for all players involved and the two head coaches, with everyone rated on a scale of 1 to 10.

Coach Thierry Anti – 9
Rotated his bench throughout, trusting the squad at his disposal and they repaid his trust with an inspired performance

Nicolas Tournat – 10
An absolute nightmare for PSG in attack and defended well for the most part. Little rough patch in second half, but fought his way through it, proving to be the focal point of everything Nantes did well with eight goals and countless penalties won.

Cyril Dumoulin – 10
‘The Windmill’ rose to the occasion to come up with massive saves at crucial moments and was there to save the day when the lead was cut to a single goal.

Olivier Nyokas – 8
No answer to his movement in the backcourt and produced a piece of brilliance in the final minutes to steady Nantes’ ship.

Dominik Klein – 8
His presence on the court alone is worth the rating. This farewell event means so much to him and he took his chances brilliantly.

Kiril Lazarov – 8
Missed a couple of shots from open play and one penalty, but showed his nerve to step up again and ended up scoring seven from the seven-metre line and a strong penalty taker is always incredibly important.

Romain Lagarde – 7
Came on late in first half and took on the PSG defence fearlessly. Gave away a silly two-minute suspension late on, but got away with it.

Rock Feliho – 7
Defence did not look the same without him.

Eduardo Gurbindo – 6
Did his job unspectacularly in the first half and made way for Lazarov.

David Balaguer – 6
Not much action on the right wing, but scored momentum swinging steal and goal in the second half.

Coach Noka Serdarusic – 4
Did not intervene when it looked like PSG were about to lose control in the first half and could not give his players the direction to fight their way back.

Nedim Remili – 8
Looked a bit lost in opening 15 mins, but crucial in cutting the gap both halves with a string of goals. Best performer for PSG.

Mikkel Hansen – 7
Much better second half performance, but more needed from a potential game-changer like Hansen.

Nikola Karabatic – 7
Decent effort in attack, but did not take over the match when PSG needed him most.

Sander Sagosen – 6
Opening goal of the game promised much, but wasn’t given much of a chance in the second half. Defended well at times but torn apart by Claire and Lagarde in second half.

Benoit Konkoud – 6
Came in for Abalo and took a couple of his chances before making way again.

Jesper Nielsen – 6
Good movement on the line, scored a couple early. Let some chances and balls slip late in the first half and never recovered from that.

Luka Karabatic – 5
Improved the PSG defence in the middle after coming on in the second half, but his injury was evident in attack.

Rodrigo Corrales – 5
Saved a first half penalty and stayed in afterwards, but could not contend with the power of Tournat.

Thierry Omeyer – 4
0% save rate in opening 15 minutes, but not all down to him. Finally made a few saves when reintroduced late on.

Uwe Gensheimer – 3
Didn’t see the ball early on and missed first shot, needed 25 mins to get involved and that was about all we saw from Uwe.

Luka Stepancic: – 3
Came on during a two-minute suspension and ends up getting one himself. Not a single shot registered.

Henrik Mollgaard – N/A
Did not play long enough for a rating.