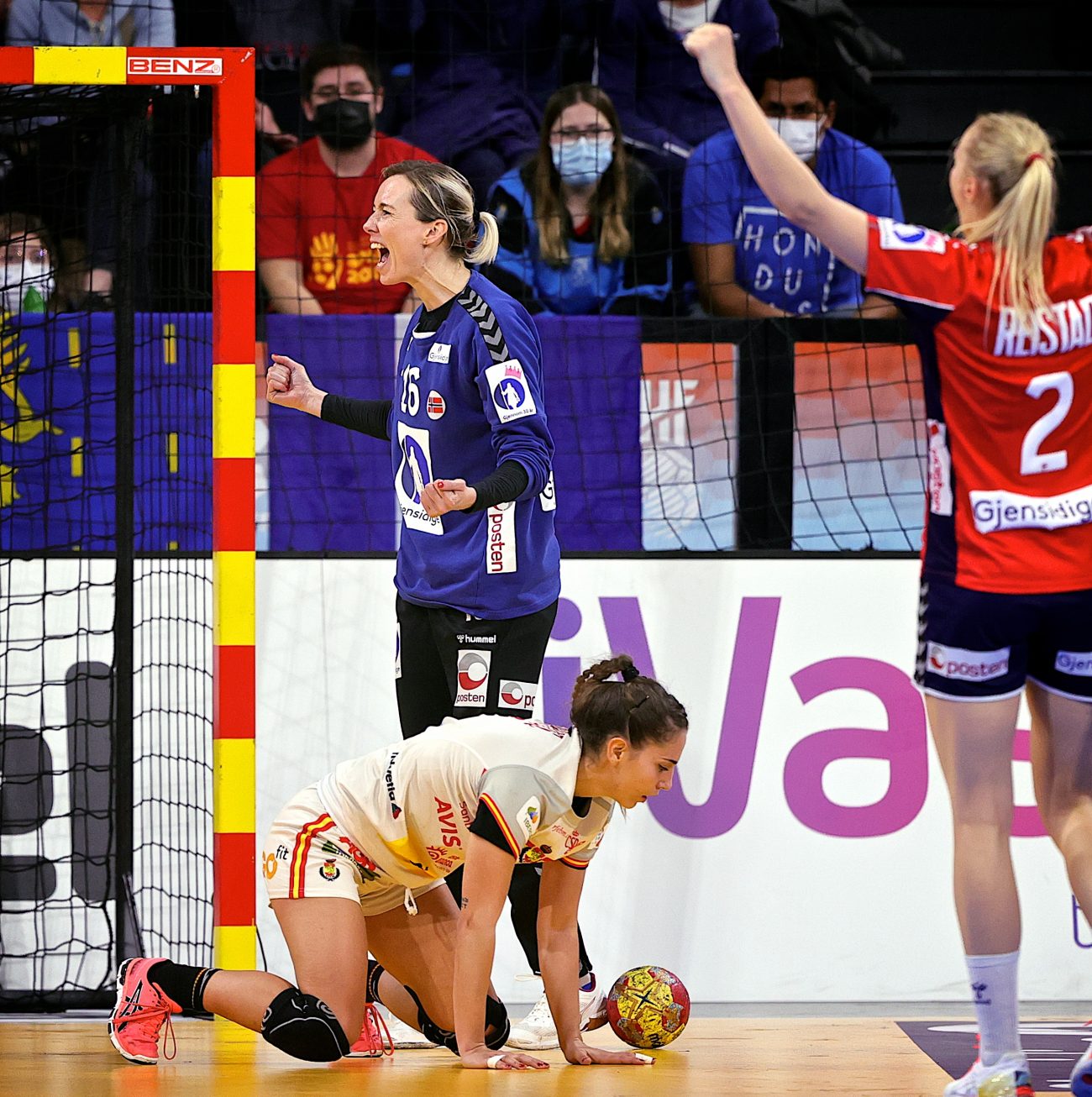 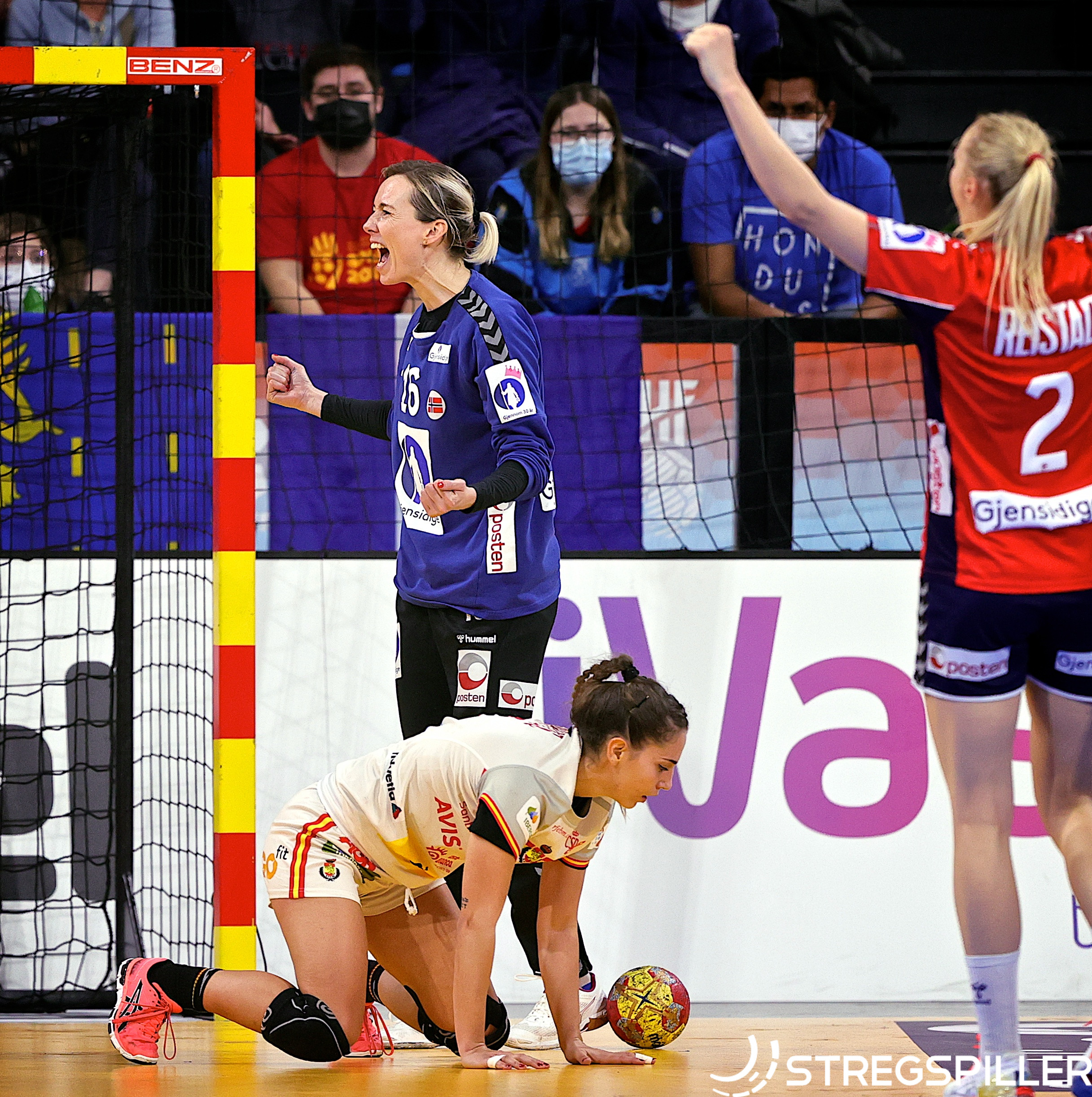 IN FOCUS: Friday’s second semi-final saw Spain and the majority of the packed arena fend off the Norwegian challenge for as long as possible, before succumbing to a six-goal loss, which sends the Scandinavians on to Sunday’s final against France, while Spain battle Denmark for bronze.

Coach: Thorir Hergeirsson – 8
Perhaps went too heavy on the squad rotation in the first half, which allowed Spain to claw their way back into the match but set things straight in the second half and his team delivered a commanding 30-minute display.

Kari Brattset Dale – 9
Was an early focal point of Norway’s attack and a constant one. Bratsett’s role in this team has increased in importance like none other during Spain 2021 and she has lived up to it brilliantly. A perfect 7 from 7 in shooting, a pair of penalties won and steals made in defence.

Katrine Lunde – 9
Norway’s other supreme performer tonight. She produced solid saves throughout the match and worked well with Norway’s defence to send Spain’s shooters exactly where she wanted them. 13 saves at 38%, including six from particularly important shots on the wing, penalty line and fast breaks, another top performance from the evergreen Lunde.

Nora Mørk – 8
A very solid performance from the star right back. Seemed a little unwilling to engage with Spain’s defence in the first half, opting rather to create for others but she really came to life when her team needed her in the second half, scoring five goals in the third quarter as Norway took control.

Sanna Solberg – 8
One of the few players who practically played the entire match and had a large role to play today. As the number 2 on the left of the defence, she was on the receiving end of a lot of Spain’s pressure and dealt with the physical contests well. In attack, she was the most prolific of the wings with three goals from her four shots on goal, an underrated cog in this squad.

Stine Bredal Oftedal – 7
Not a shooting performance to remember for Oftedal but she has enough teammates to do that, her role is to control the attack and create opportunities, which she does in abundance. Eight assists for the playmaker today, who in turn has really cut down on turnovers, two things which will be key in the final.

Maren Aardahl – 7
Did very well in the centre of defence to shepherd the Spanish attackers from harm’s way. Growing into this role game by game and while there is still room for improvement at the attacking end, she is fulfilling her primary role well.

Veronica Kristiansen – 7
Held on to her starting position at left back and was good value for it in the opening 10 minutes. Seems she is still adjusting to her defensive role in the team but you can always rely on Kristiansen to give whatever she can to the team. Came on again late in the match to add a pair of goals and remind Thorir that she can do a job against a number of her Györ teammates on Sunday.

Marit Jacobsen – 6
Much like her fellow right wing, there were slim pickings for Marit today. After a brief spell in the first half, Jacobsen had more a shot in the second and scored her goal on a fast break in an otherwise quiet attacking performance.

Henny Reistad – 5
Just when Spain’s defence had their fill of one vs one battles, on came Henny to fire shots over them. After the first couple of attacks, however, she really struggled to have the desired impact as she committed her shots were well read and committed a number of turnovers. Things improved somewhat in the second half but 3 goals from 8 and four turnovers is not peak Reistad.

Malin Aune – 5
Difficult to judge this one. One for 20 minutes but barely had an opportunity to get involved. Missed her one shot on goal but managed an assist, that just about evens things out.

Coach: José Ignacio Prades – 7
Knew what his team needed to do to compete and he set them out to do exactly that. Took his second half timeout at the perfect moment, before things got out of hand and his team responded well but it felt like it was only a matter of time before Norway would be too much to handle.

Alexandrina Cabral Barbosa – 8
Almost single-handedly kept Spain’s attack ticking over for much of the opening 40 minutes with some inspirational play. Was the one true worry for Norway’s defence but as the second half wore on, her and Spain’s threat wore off.

Paula Arcos – 8
Stood out among the Spaniards in the second half when not much was going right for them. A clear breakthrough rising star for Spain at this championship, who seems willing to jump into any position and any challenge she is asked to. Floating around the back court, she scored three goals and played fearlessly at the top of a 5-1 defence.

Silvia Navarro – 8
Strong start between the posts, making some tough saves and kept that up throughout the contest. In that battle between the two seasoned goalkeepers, Navarro narrowly lost out but 31% and keeping Norway under 30 goals can always be considered a good day’s work.

Jennifer Gutierrez – 7
Quiet enough for most of the first half, before coming to life by firing a penalty into the top corner. Had her next penalty saved but responded confidently with her next wing shot and scored the equaliser right before half-time.

Silvia Arderius – 7
Was the best Spaniard in terms of movement and getting the attack flowing. Came on midway through the first half and her impact was felt immediately as she helped Spain get themselves level by half-time.

Elisabet Cesareo – 6
Started on the line for Spain but was often a passenger as the back court tried to make things happen. Played a key role in the late first half revival, scoring twice on the line but never had a look at goal after that.

Carmen Martin – 6
Really got stuck in early on, influencing as much as she could from the right wing by scoring as a second line player and making a good steal but tried a bit too hard as the game went on and wasn’t able to have as positive and impact as her team would have hoped, particularly with none of her three wing shots going in.

Carmen Campos – 5
Tried her level best to replicate her performance against Germany but today’s opponents were well-prepared and never allowed her to feel comfortable in attack. Got herself a goal but with the game almost over as a contest.

Maitane Echeverria – 5
Came on for Martin and was fairly quiet in comparison. Got her one and only goal in the late first-half comeback but barely had a say in attack during the second half.

Soledad Lopez – 5
Much like Echeverria, couldn’t really make the same impression as her fellow winger tonight, scoring her only goal at the very end of the match.

Kaba Gassama – 5
Has the makings of a good target woman in attack but wasn’t utilised enough, while she was often caught out in the centre of defence with Bratsett roaming free and the back court winning penalties.

Alicia Fernandez – 5
Was heavily limping after the quarter-final and did not appear to be in top gear tonight as there was none of the usual incisive pace and taking on defenders. Managed as many assists as she did turnovers and had her only shot and goal in the dying minutes.

Ainhoa Hernandez – 5
Was thrown on in the second half and came up against a Norwegian defence in ruthless form. Like the rest of the players on the line, the ball simply didn’t get there often enough.

Irene Espinola – 4
Found it difficult to deal with what Norway’s back court were throwing at her and was unable to make any impact at right back in attack, leaving her stuck on the bench for the second half.