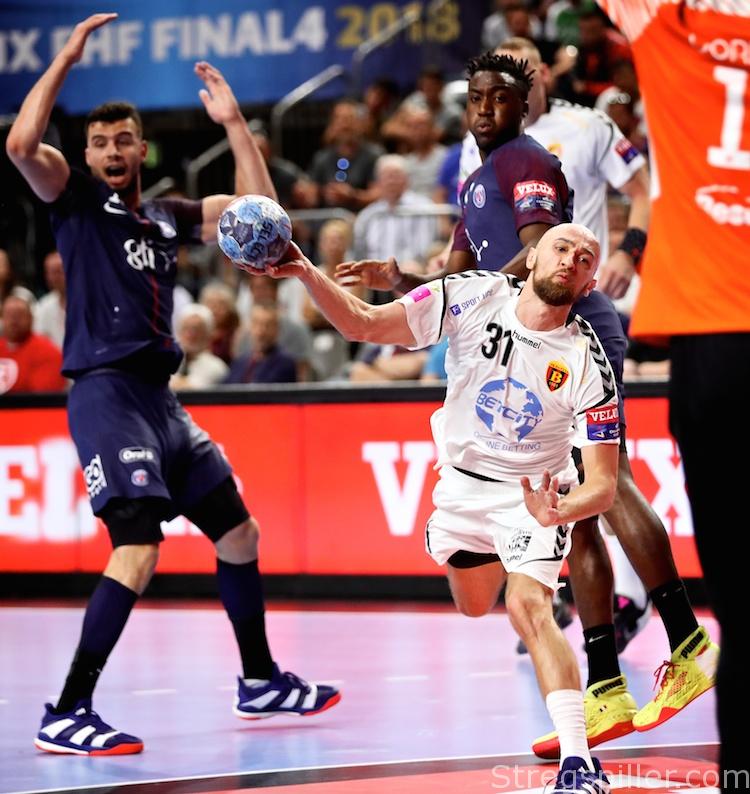 Both PSG and Vardar gave us some moments to savour in the 3/4 Placement match at the VELUX EHF FINAL4, which the French side won 29:28. Here are the ratings for all players involved and the two head coaches, with everyone rated on a scale of 1 to 10.

Coach Noka Serdarusic – 6
His best decision of the day was allowing Narcisse to come on. Assistant Staffan Olsson was the active one on the sidelines, while Serdarusic enjoyed his final international match in charge of PSG.

Benoit Konkoud – 8
Played a stormer in the first half and his five goals was a season’s best in the VELUX EHF Champions League. Took his opportunity very well.

Rodrigo Corrales – 8
Made some brilliant point blank stops, particularly in the first half, and finished with a very respectable 15 saves (38%).

Sander Sagosen – 7
Scored the opening goal of the game once again, but this time he powered on from there and was a constant threat in attack.

Uwe Gensheimer – 7
This season’s top scorer came up with goals at crucial parts of the game to help swing momentum.

Nikola Karabatic – 7
Played the match as if it were a final, put his body on the line. Not the finest of performances, but set an example for his teammates.

Daniel Narcisse – 6
The entire arena were chanting his name in the first half and he got his opportunity to say goodbye to international handball in the second period. Bagged himself a goal with a moment of quick thinking.

Adama Keita – 5
Started on the left wing and missed first two shots inside the opening 10 metres, then made way for Gensheimer. Nice finish for his only goal late in the game.

Henrik Mollgaard – 5
Stoilov left him for dead a few times early on, but put in a decent shift when needed in defence.

Luka Karabatic – 5
PSG defence clearly better with him, but got caught out on a couple of occasions. His hand injury meant he couldn’t make an impact in attack.

Jesper Nielsen – 4
Saw a lot of court time in attack, but was somewhat anonymous today.

Mikkel Hansen – N/A
Did not play enough for a rating

Luc Abalo – N/A
Did not play enough for a rating

Thierry Omeyer – N/A
Only faced penalties today – one save from four.

Coach Raul Gonzalez – 6
Had PSG figured out for most of the match, but could not react accordingly when the momentum began to shift.

Luka Cindric – 8
Tried a bit too hard early on and made some errors, but settled in and continued to push the pace for Vardar in attack. Always popped up with goals.

Jorge Maqueda – 7
The outstanding player for Vardar until he was sent for an early bath by the referees with a quarter of the game left to play.

Ivan Cupic – 6
The most involved wing player over the weekend for Vardar. Missed just one of five penalties and somehow managed to get a shot stuck between the post and crossbar.

Dainis Kristopans – 6
Kept trying, despite taking heavy hits throughout from the PSG defence and enjoyed a good spell at the end with a few nice goals.

Strahinja Milic – 6
Decent showing between the posts again from Milic, but was not able to come up with game-saving stops in the second half.

Mijajlo Marsenic – 6
Honest day’s work in defence and attack when called upon. Got away with the odd suspension-worthy challenge.

Rogerio Moraes – 5
Effective after he came on in the first half and was the most dangerous line player for Vardar again, but once again failed to make it count with just a single goal.

Timur Dibirov – 5
Forced his was into the game more today and got himself a nice goal, but simply not used enough by the back court dominated attacking play.

Vuko Borozan – 5
Scored a couple of nice goals early on, but PSG figured him out afterwards. Suffered an ankle injury in the second half, but 3/9 shooting is way off last year’s breakout performances.

Stojance Stoilov – 4
Danced between the PSG centre block with ease, but could not finish his clear shots on goal and did not feature in the second half.

Joan Canellas – 4
Tried hard to play his part in attack and defence, but did not have much luck

Daniil Shishkarev – 3
Had plenty of time on the right wing today, but barely touched the ball once again.