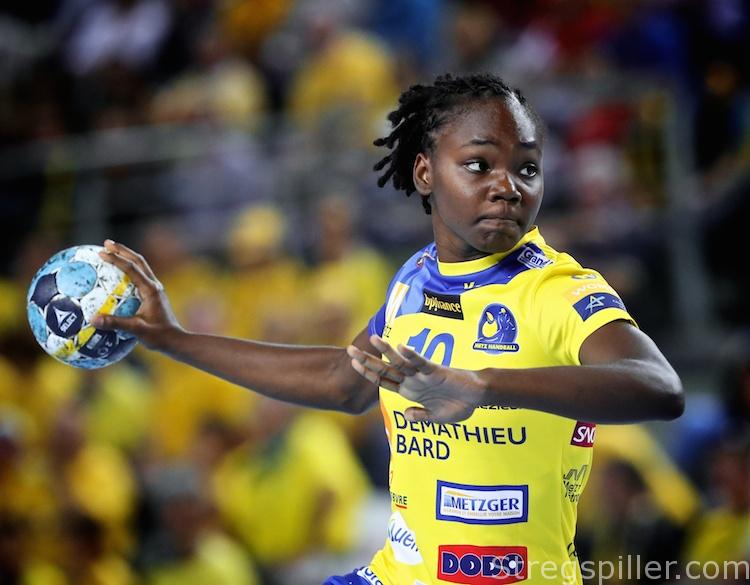 IN FOCUS: Metz ended 2020 on a high with their first away victory of the season, winning 28:25 in a topsy-turvy battle against Esbjerg, who again will feel they could have come away with more but have to come to terms with a sixth loss in this season’s DELO EHF Champions League.

Coach Jesper Jensen – 6
Reacted well to what Metz did on a couple of occasions but in the end he and his team was undone by their relative lack of squad depth.

Sanna Solberg – 8
A huge improvement on the last European match, doing pretty much everything that could be asked from her on the left wing. Well-placed shots, earned a smart penalty and fought hard in the number 2 position in defence.

Mette Tranborg – 7
Was Esbjerg’s go-to shooter in the first half and did not disappoint, firing in four from right back. A bright start to the second half was curtailed by a two-minute suspension and she was unable to get back on track from there.

Nerea Pena – 7
Made an instant impact after coming on and was a driving force as Esbjerg took control late in the first half – even stealing a ball in defence. Just two of her five goals came from open play and it would have been nice to see her take more opportunities in the second half.

Marit Røsberg Jacobsen – 6
A frustrating day for the right wing player. 3 goals from 6 is not consistent enough for her and a fast break miss in the first half is a good example of it. On a positive note, her goals were well-taken and she get involved as much as possible.

Sonja Frey – 6
So tricky to rate Frey because she genuinely gives you a bit of everything. 3 goals from 8 shots, 6 technical errors and 7 assists. Caused the Metz defence plenty of headaches and occasionally her own teammates. Such a blast to watch but today could have been better.

Marit Malm Frafjord – 5
Showed bright signs whenever she was on the ball in attack but not involved nearly as much as she would have liked. A cheap suspension for petulance when a decision did not go her way and a late missed lob were important moments as Esbjerg let the game slip away.

Kristine Breistøl – 5
Not much to write home about in front of goal for the left back. Looked like she would enjoy more space early on but was well-managed by Metz’s defence.

Played an important role in defence and produced some blocks but more was needed at the other end.

Vilde Ingstad – 5
Primarily in a defensive role today but had more opportunities in attack as Esbjerg looked for a way through. Instead was unable to deliver on that front as she found the net just once from three attempts.

Rikke Poulsen – 4
Made a bright start with a couple of very good saves but the well soon dried up for her, managing just a 19% save rate until she was taken off at the 42-minute mark.

Rikke Granlund – 3
Thrown in goal midway through the second half as the game slipped away from Esbjerg and was unable to stem the flow of Metz goals with no saves from six shots.

Coach Emmanuel Mayonnade – 8
I don’t know what he did at half-time but it sure worked. Made good tactical and personnel changes throughout the game, dictating the pace of the game for the most part and making the most of his stronger squad.

Louise Burgaard – 9
A strong performance today against her fellow Danes and her national team coach. Had a couple of rough patches in front of goal but six from ten is a good day in terms of shooting. Crucially for her, she was confident and willing to take on the shots, take on defenders and make decisive passes.

Meline Nocandy – 9
Absolute game-changer! Had a taste of the action late in the first half and then exploded into life in the second, scoring five goals in 10 minutes and setting up a couple more as Metz took control.

Hatadou Sako – 7
12 saves on her account today, more than double her opponents’. It was not so much the frequency, rather the timing of her saves which proved vital, particularly the fast break stops which really boost a team.

Debbie Bont – 7
Ever-reliable Bont with a perfect three from three from the right wing in the first half, that plus an assist is everything needed from her.

Jurswailly Luciano – 7
Only her second game in Europe this season, oddly both against Esbjerg, and looked very sharp. Scored four from the right wing in the second half, much like Bont – did exactly what was required of her.

Orlane Kanor – 6
Was in the wars a bit today, taking some heavy hits from Esbjerg’s defence, but that did not stop her from being involved in front of goal. Three goals from six is not ideal but she did provide one of the killer blows late on.

Olga Perederiy – 6
Not as prolific a game as we have become accustomed to seeing from the line player but still took her two chances well and offered a lot in defence.

Astride N’Gouan – 6
Nightmare to deal with in defence as shown with the penalty she won and her one goal. Was a bit off the pace in defence and potentially explains why she was not involved more at both ends.

Tjaša Stanko – 5
Out of sorts in the first half as the game passed her by somewhat. Great sign of her character as she came back in at a crucial phase of the second half and scored a vital goal.

Laura Kanor – 5
A quiet outing by her standards. Her only goal was an important one though as it drew Metz level in the second half.

Camila Micijevic – 4
Looked to hurt herself as she scored Metz’s first goal of the day. Battled on but was unable to make much of an impact thereafter.

Manon Houette – 4
Got a needless two-minute suspension right after coming on. Also missed a penalty but scored her one shot from open play.