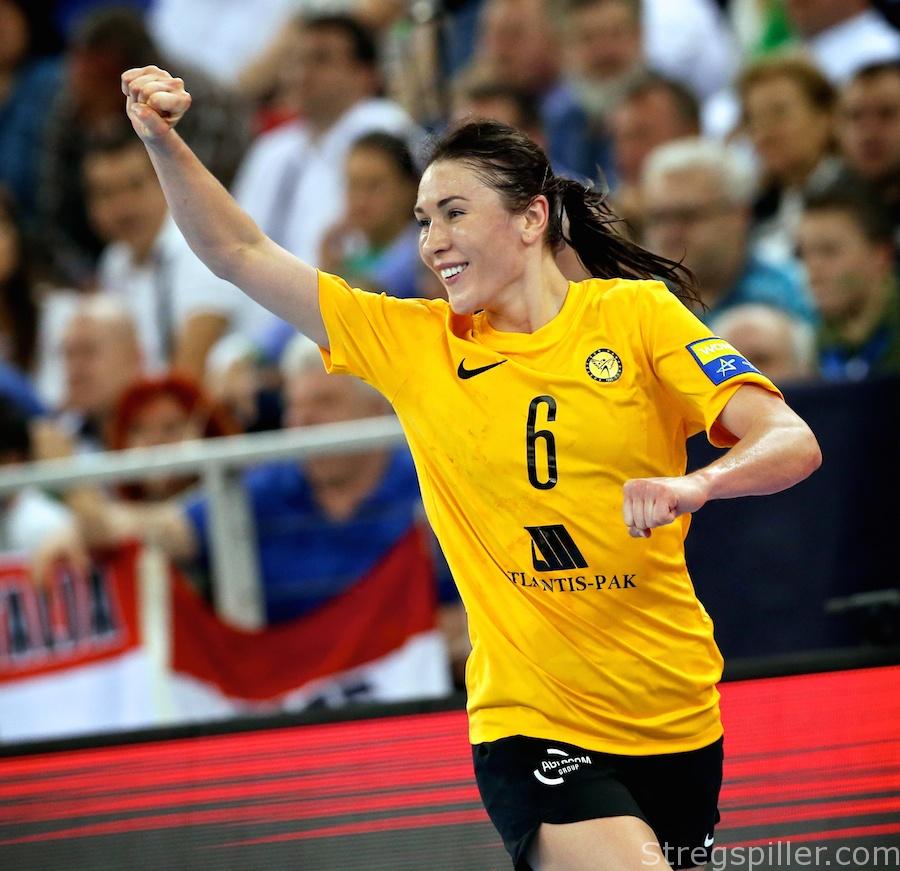 IN FOCUS: There was high drama in this weekend’s highlight match in the DELO EHF Champions League as Rostov-Don escape from Denmark with a 25:24 victory as Esbjerg fail to equalise from the penalty line with the last throw of the match.

Coach Jesper Jensen – 7
You have got to feel for the man and this Esbjerg team. Took his timeouts well today, rotated the limited bench as much as possible and seemed to make the right decisions to deal with Rostov. Probably deserved a point today.

Kristine Breistøl – 8
Six goals from 11 attempts is not amazing but I’ll cut Breistøl some slack here as a couple of the shots were from the right side and a couple were “last-resort” attempts.
Gave Esbjerg the lead with two big shots at the start of the second half and played well at both ends of the court.

Rikke Poulsen – 7
Brilliant against the wings in the first half, even after taking a shot to the kisser early on. Produced two big penalty saves early in the second half which looked to turn the game around but was relatively quiet thereafter.

Mette Tranborg – 7
Shot very effectively today, scoring five from six, but perhaps could have let loose a bit more often as she was clearly in good form. Was caught out a couple of times in defence in the second half but was otherwise solid in the number 2 position on the right side.

Sonja Frey – 7
Was not getting much joy in the opening 20 minutes but got the arena rocking with a scorching shot.
Tried to force some passes and shots which were not on in the second half and frustration with herself was clear to see. Things improved when Frey went back to basics and she burst through the middle twice late on to inspire her team’s final charge.

Marit Malm Frafjord – 6
Played an important role in defence today, keeping the centre out of bounds for Rostov. Probably should have been given more than the one penalty she earned alongside her two goals.

Nerea Pena – 6
Having just arrived on Thursday and been out of action for a month, you couldn’t expect much from Pena, but she played well. Made an immediate impact once she got to play on her favoured side with a goal and having scored one penalty, it was a pity not to see her take the final one where she could have become an instant hero.

Kaja Kamp Nielsen – 5
Brought in late on to deal with Vyakhireva in defence and did so very well but did not have much else to do today.

Marit Røsberg Jacobsen – 5
Had to stay patient to get her first shot, a 6 on 5 situation late in the first half and did not disappoint.
Her shooting was off after but did earn two penalties from counter attacks. Was given the chance to save the day with the final penalty but couldn’t do the business.

Vilde Ingstad – 5
First game in Europe in almost a month and did quite well in both attack and defence when called upon, without doing too much to write home about.

Annette Jensen – 4
Required a couple of shots to get her eye in before scoring a nice long-range shot but that was her bright moment in an otherwise fairly short and standard performance.

Sanna Solberg – 3
A day to forget for the Esbjerg wings, particularly Solberg. Could not score from any of her three attempts and was given the run-around by Vyakhireva on far too many occasions in defence.

Coach Per Johansson – 7
His side may be lucky to get the two points at the end of the day but they did enough on the whole to earn it. Set up his team well and made the right personnel and tactical changes throughout.

Iuliia Managarova – 9
Was named the official player of the match and I find it hard to disagree. Smart and explosive movement combined with her connection with Vyakhireva makes her impact larger than most wing players and she made it tell today. Set the tone with three early goals and a perfect example of her determination late on as she gave the ball away, only to chase back and steal the ball back from Frey.

Viktoriia Kalinina – 8
A very assured and impressive goalkeeping performance from Kalinina. With a 37% save rate in both halves, reading the wings particularly well and stopping Breistøl from going on a scoring streak.

Vladlena Bobrovnikova – 8
Had big shoes to fill with Anna Sen out and filled them very well. A quiet first half had me thinking she could be a weak link in crunch time, but she came into her own in attack in the second half, scoring three exquisite goals and moving the ball well when she was needed most.

Ksenia Makeeva – 7
Had a big role in the centre of defence, keeping the line quiet and Sonja Frey out of harms way but her impact grew at both ends of the court as the game wore on.

Anna Vyakhireva – 7
It looked like it was going to be a frustrating day early on, but the mercurial right back persevered through the heavy challenges and occasionally poor shooting. She consistently found gaps to burst through down the outside right and punched above her weight in defence all day.

Anna Lagerquist – 7
One of Rostov’s outstanding performers this season had an understated and important part in the victory. Was not fed the ball often in attack but made the most if it when it did arrive and combined well with Makeeva in the centre block.

Viktoriya Borschenko – 6
Came in as the playmaker, played it cool and got the ball moving without doing anything spectacular. Did well to draw a penalty and a suspension in the first half, besides that her only shots were from the penalty line.

Grace Zaadi Deuna – 6
Unable to have the outstanding impact she would have liked to, but Zaadi always has a way to help her team. Moved the opposition defence around well at times and dished out plenty of assists before being taken off for the final quarter.

Kristina Kozhokar – 5
Was not involved as often as the other occasions I’ve seen her this season but was fairly solid when called upon, scoring two from three on the left wing.

Polina Kuznetsova – 4
In stark contrast to Managarova on the right wing, Kuznetsova did not get involved much while on court. Had a single shot on goal, which was saved.

Although they did not play enough to be rated, a shout-out to Krpez-Slezák for scoring a penalty when nobody else could in the second half and for Galina Gabisova and her great penalty stop to save the victory for Rostov with the final throw of the game.