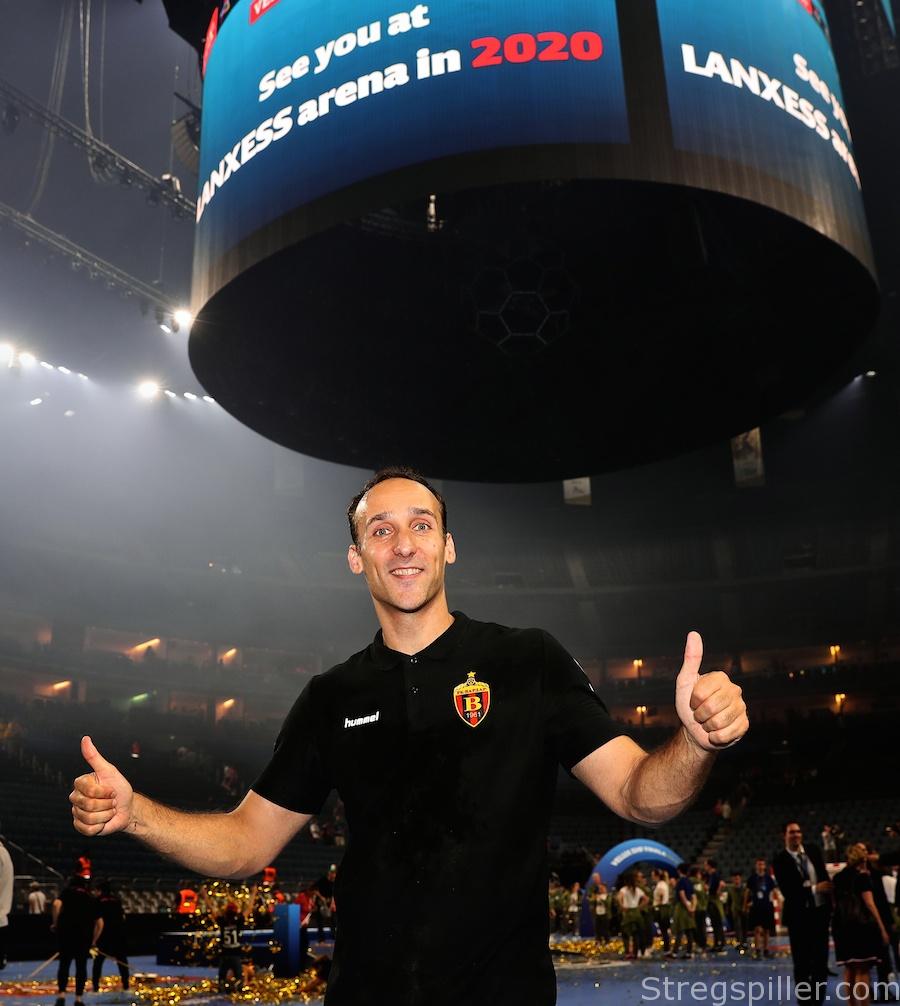 Vardar found a way to overcome all the odds, fatigue and a larger opposition squad to claim their second title at the VELUX EHF FINAL4 in three years with a 27:24 win over Veszprém.

Coach Roberto Parrondo – 9
How he managed to squeeze another performance like this out of such a limited squad, I’ll never know. Needed to reshuffle after the Shishkarev injury and his attacking plan created spaces in all the right places. Awesome first season as a head coach, he and assistant Biljana Crvenkoska deserve so much credit.

Igor Karacic – 9
Some of the passes into the line were out of this world. Not the best shooting performance, but like everyone on court for Vardar, he showed incredible fighting spirit. Considering he had to be carried off yesterday, what an effort at both ends of the court from the man who has had a season of redemption, which ends with an MVP trophy alongside the big one.

Rogerio Moraes – 9
Where did this guy come from? Always seemed to be in the right place at the right time. Placed his shots to perfection and it was exactly the performance Vardar needed on such a big occasion.

Dainis Kristopans – 8
Wasn’t able to impact the game in the same direct scoring way today, but made up for it with some fantastic passing. Scored two important goals in the final 10 minutes.

Ivan Cupic – 8
Came in much earlier than he would have expected, with Shishkarev’s injury, but stepped up to the mark with perfect penalty shooting. Scored three of his side’s last four goals, for his third title in four seasons.

Gleb Kalarash – 8
Played a massive part in reducing Veszprém to just 37 shots on goal. He encapsulates everything which is good about Vardar’s spirit and their unbelievable journey to the title this year.

Timur Dibirov – 7
Began the game much better today, scoring two excellent goals as Vardar built their lead. Always involved, always pushing the pace in attack, proven by the fact that he ran almost a full kilometre more than anyone else on the court today.

Stas Skube – 7
Made his mark in the first half, dancing around and through the Veszprém defence at will.

Dejan Milosavljev – 6
Not the best day at the office, with a 27% save rate, but his seven saves came at important points throughout the game.

Stojanche Stoilov – 6
Brought in during the first half and picked up where Moraes left off, scoring two goals on the line.

Christian Dissinger – 6
Wasn’t able to produce much in terms of attack and was terrorised a bit by Nenadic, but still helped with some solid defending at crucial moments.

Daniil Shishkarev – 5
Departed early due to what looked like a nasty muscle strain in the first half. Did reasonable well before his injury.

Kalifa Ghedbane – 5
Was brought in when their lead began to crumble in the second half. Two saves from seven shots is not terrific, but he produced a memorable moment with a big smile on his face after taking a ball square to the face.

Coach David Davis – 6
Showed us the depth of his squad by starting a plethora of players who didn’t feature much in the semi-final, but they didn’t produce. May have left it a bit late to take his first timeout – five goals down. Appeared to make all the right decisions in the second half, but it wasn’t enough to turn the game around.

Arpad Sterbik – 7
Another medical marvel from Sterbik as he enters the court after half-time. Made a couple of point-blank saves right away and inspired Veszprém’s revival. Besides his 36% save rate, the fact he did it on the back of yesterday’s injury earns him a high mark.

Petar Nenadic – 7
Unleashed at the beginning of the second half and played a central role in the initial comeback.
Won penalty after penalty, combining beautifully with Lekai, but his shooting was somewhat wasteful today.

Mate Lekai – 7
Did very well in attack during the second half, creating plenty of opportunities for Nenadic as well as scoring a pair of goals himself.

Borut Mackovsek – 7
Started at left back and fired in two early goals, but the rest of his working day was carried out in the centre of defence, where he mostly did a good job. Caught out a couple of times in the second half by Karacic.

Kentin Mahé – 6
Some gorgeous passes as playmaker in the first half and he controlled the game better than Saturday. It wasn’t enough to keep him in the game for the second half, but he was able to display his wonderful array of penalty shots, scoring all six of them.

Kent Robin Tonnesen – 6
Filled in as first choice right back well, settling in early with a couple of goals. His four goals came in two short bursts, while large periods of his 35-minute appearance went by somewhat unnoticed. Very much off the pace in defence, and it was punished, but solid output overall.

Dragan Gajic – 6
Starved of possession when he played in the second half and you could see it when he buried his one shot in off the post. Tried to get involved as a second line when the opportunity arose.

Mirsad Terzic – 6
Struggled in the first half, alongside the rest of the Veszprém defence. Read the game very well in the second half and for the most part managed to keep Kristopans under wraps.

Blaz Blagotinsek – 6
Played a crucial role in the centre of defence alongside Mackovsek in the second half. Missed a crucial chance to score in the final five minutes.

Andreas Nilsson – 6
Scored two within minutes of entering the fray, but that was as good as it got for him. Could have been the right man to use on the line in the final quarter, but he wasn’t used.

Laszlo Nagy – 5
Dropped the ball right after coming on, but soon allayed any fears about his shoulder, burying a long-range shot. His shoulder may have impacted his ability to defend and he didn’t offer much besides his one shot.

Momir Ilic – 5
Said farewell to his playing days with a nice goal in the first half, but could have done without the following two shots and two-minute suspension, which was the last we saw of him.

Manuel Strlek – 4
Came on at the beginning of the second half, but like his fellow wings, was simply not involved.

Gasper Marguc – 4
Much like his fellow wings, wasn’t able to get involved in the first half. The only stat of note for Gasper is he recorded the fastest sprint of 29.41 kph.

Roland Mikler – 3
A lot rested on his shoulders after the injury to Sterbik. Mikler has been brilliant all season, but he was not up to scratch today, producing just three saves.

Dejan Manaskov – 3
Didn’t get a sniff of the ball for the opening quarter, then tried to force a pair of no-angle shots. Not the best performance against the club from his homeland.