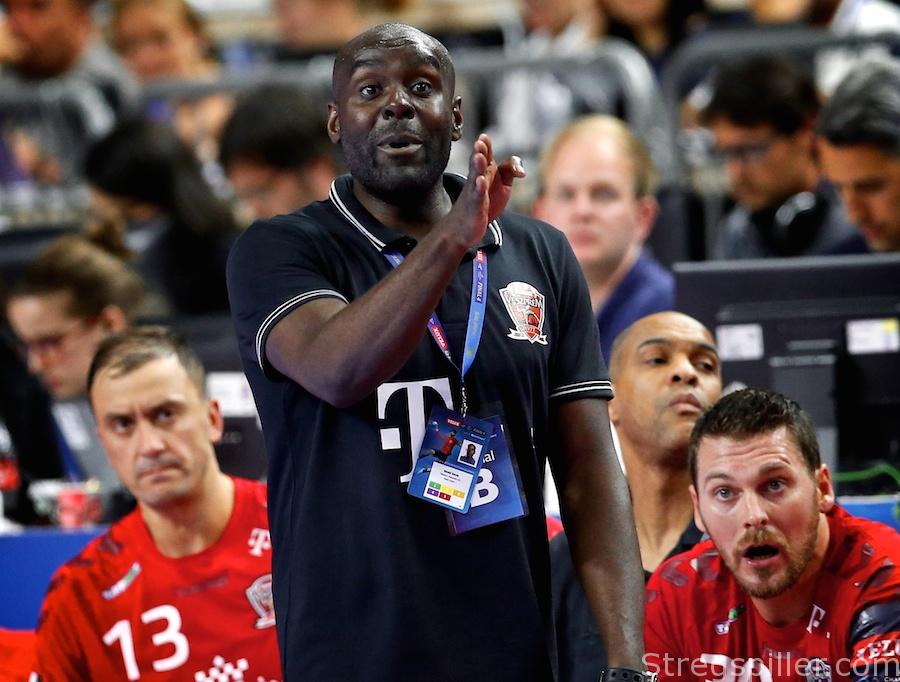 Veszprém’s second half demolition job in attack booked them a ticket to the final with a 33:30 win over Kielce in the opening match of the VELUX EHF FINAL4 2019.

Coach David Davis – 8
Made full use of his squad and was patient when things were going wrong. Kielce had shut down his attack’s concept play, so he unleashed his ultimate individual performer, Petar Nenadic, at the beginning of the second half and boy, did it pay off.

Petar Nenadic – 10
A stunning second half.
Scored on the counter attack at the beginning of the second half and that set him on fire – scoring six in the crucial third quarter of the match. Completely dominated Kielce’s defence in the second half with 11 of his 12 goals and was well and truly the matchwinner.

Arpad Sterbik – 9
Glorious opening 10 minutes, classic Sterbik. Looked set to dominate the match between the posts, until Marko Mamic landed on his right foot on a fast break. Despite having his stint in goal cut short, he set the tone from the first moment and that impact cannot be underestimated.

Roland Mikler – 8
Had some seriously big shoes to fill once he came on, but didn’t shirk from the challenge and caught the first shot which came his way. Made some fine saves throughout the match and his 30% save rate is fine going, considering his defence didn’t help at times.

Manuel Strlek – 7
Was not messing around against his former employers. Perfect from the left wing in the opening half, including a stunning spin past a defender and spin shot past Cupara just before the break. Quiet in the second half, a missed penalty his only involvement.

Laszlo Nagy – 7
Very strong showing at both ends of the court. Showed just how in control he was in the 16th minute, when he decided there was too much air in the ball and deflated it himself.
Hurt his left shoulder in defence in 40th minute and never returned.

Mate Lekai – 7
Didn’t enjoy too much shooting success in the first half, but created a plethora of opportunities against Kielce’s 5-1 defence and dished four assists. Improved in the second half and ended with four goals.

Dragan Gajic – 7
A bit of a mixed bag for a wing, missing three from his eight shots, but overall a positive performance and tireless effort over the entire 60 minutes.

Mirsad Terzic – 7
Often caught out or reacted too late in the second half, but he stood into the centre block when Blagotinsek saw red and helped shut Kielce down at crucial moments. A non-obvious and important contributor.

Blaz Blagotinsek – 6
Solid effort at both ends until his red card in 40th minute for blow to Kulesh’s face and that was a blow to Veszprém’s defence.

Andreas Nilsson – 6
Missed a golden opportunity shortly after coming on and afterwards barely given room to breathe by the Kielce defence, but his struggles opened up the game for Veszprém’s back court to do the business.

Kent Robin Tonnesen – 6
Unspectacularly fulfilled his role in attack, popping up with a pair of goals. Was able to keep the ball moving and allow Nenadic to shine in the second half. If Nagy cannot play tomorrow, he will need a bigger game.

Momir Ilic – 6
Came in midway through the first half and produced a goal and a pair of assists. Helped out in defence a bit in the second half, while Nenadic took control.

Borut Mackovsek – 5
Given the start at left back, but wasn’t able to make much of an impact. Thrown in at the centre of defence while Veszprém were struggling.

Kentin Mahé – 5
Looked like he wanted to force things a little too soon and turned the ball over on a couple of occasions. Given another chance at the start of the second period and looked more in control, but couldn’t get going and was given the hook again.

Coach Talant Dujshebaev – 7
Set up his defence to mess with Veszprém and it mostly worked in the first half. Rotated his attack to the best of his ability, but there just were not enough answers on the bench.

Alex Dujshebaev – 8
Got his side off the mark after a disastrous first five minutes. Made things happen out of nothing when his side looked stuck and his six goals and four assists was crucial for Kielce. Alas, he was stumped at the end, missing his final three shots

Artsem Karalek – 7
Missed a couple of golden opportunities on the line, but for the most part was very good as he delivered the most consistent shooting performance for Kielce.

Blaz Janc – 7
A bit anonymous on the wing, but took matters into his own hands when given a chance at right back and was a real threat in the second half.

Mariusz Jurkiewicz – 6
Strong effort in defence as Kielce ruined Veszprém’s concept attack, ran fast breaks with vigour and cannot be faulted too much.

Vladimir Cupara – 6
First save after five minutes . Outshone by Sterbik, but actually made a string of fine saves in the opening quarter. Wasn’t able to make enough of an impact in the second half, despite some great stops.

Uladzislau Kulesh – 6
Took him a while to get going, but found his range in the 11th minute and occasionally showed us that killer jumpshot. Unfortunately for him, three goals from seven shots won’t cut it at the FINAL4.

Arkadiusz Moryto – 6
No complaints for his attacking output, scoring two from two, but no greater impact.

Marko Mamic – 6
His moment in the spotlight came when he crashed down on Arpad Sterbik’s foot after scoring a fast break in the first half. Scored two fast breaks and decent defensive output.

Luka Cindric – 5
Disaster for Luka in front of goal for the opening 40 minutes, then took control of the attack for Kielce, keeping them in the game. Not the semi-final performance of two years ago.

Angel Fernandez – 5
Scored from his one attempt, but much like his fellow wings, not much of a say in proceedings.

Mateusz Jachlewski – 4
Not his day as he scored just one of five attempts on goal. Kielce truly lost the battle of the wings today.

Krzysztof Lijewski – 4
Couldn’t contribute much in attack and was caught out in defence on occasion.